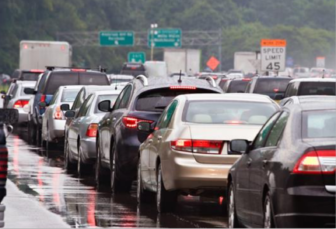 The U.S. Environmental Protection Agency’s announcement Monday that it plans to ease more-stringent auto emissions standards put in place at the end of the Obama administration has particular resonance in Connecticut, with the potential to force the state to accept cars that are more polluting than it wants and make its notoriously bad air even worse.

The widely anticipated announcement said the standards covering cars and light-duty trucks for model years 2022-2025 “were not appropriate and should be revised.”

EPA Administrator Scott Pruitt said in a statement that a midterm review by the Obama administration of the standards for 2017-2025, which were initially approved in 2012, was cut “short with politically charged expediency, made assumptions about the standards that didn’t comport with reality, and set the standards too high.”

Theoretically this would have little impact on Connecticut since it is one of about a dozen states – mostly in the Northeast – that operate under what is known as the “California waiver.” The waiver was added to the Clean Air Act in its 1970 revision and allows California to set its own stricter-than-federal standards for motor vehicle emissions. States can follow either the federal standard or California’s.

But Monday’s EPA announcement also said this: “The California waiver is still being reexamined by EPA under Administrator Pruitt’s leadership.” It quoted him as saying: “Cooperative federalism doesn’t mean that one state can dictate standards for the rest of the country.”

And that is being widely interpreted to mean Pruitt intends to rescind the California waiver.

Connecticut environmental officials and advocates view the California standards as a linchpin in their own state’s environmental strategies to lower greenhouse gas emissions and traditional pollutants. Being unable to use them has the potential to upend the state’s ability to meet its air-quality goals and its requirements for fighting climate change, as well as cripple the electric vehicle business.

“It is ominous that they went out of their way to call out the waiver and have this reference to California dictating. No, that’s what the Clean Air Act says,” said a clearly angry Rob Klee, commissioner of the Department of Energy and Environmental Protection, who has been a frequent critic of the Trump EPA’s efforts to roll back environmental protections.

The California standard and the rights of other states to use it are “baked in” to the Clean Air Act, he said, to allow states like California and Connecticut that tend to have extensive air pollution problems to rectify them in the interests of public health and fighting climate change.

“This is an affront to that and an affront to our ability to meet those public health and climate-change goals that our states are leading on and this EPA is backsliding from,” Klee said.

In Connecticut 70 percent of smog and 43 percent of greenhouse gas emissions come from transportation. What plagues Connecticut more than almost any other state are power plant and motor vehicle emissions from mainly midwestern upwind states. In the summer especially, those emissions essentially cook in the heat, creating ground-level ozone, a major component of smog.

Connecticut has been in so-called “non-attainment” of EPA ozone standards for years. Relaxing the emissions standards – even if the California waiver stays in place – would probably make that non-attainment worse.

With just about every coal- and most oil-burning power plants in New England closed and the whole region participating in the Regional Greenhouse Gas Initiative to cut power plant emissions – there’s little the state can do to cut electric sector emissions further. 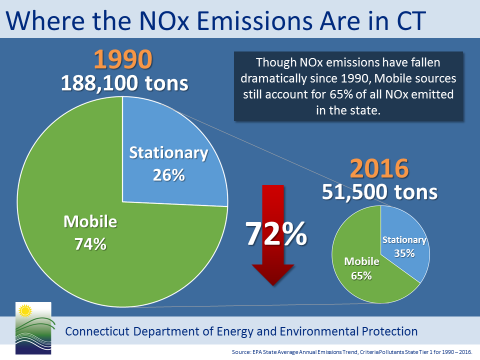 This chart show that vehicles are the major source in Connecticut of nitrogen oxide emissions, a major component of smog. In addition to vehicles, nitrogen oxides are emitted by industrial sources such as power plants and boilers.

So really all Connecticut has to work with to cut emissions on its own are vehicle emissions.

The federal Corporate Average Fuel Economy, or CAFE, standards, which Pruitt said would be revisited, are imposed by the National Highway Traffic Safety Administration and govern mileage standards. The better the mileage, the lower the emissions.

The Obama administration had planned to increase the CAFE standard to 54.5 miles per gallon by 2025. Lower emissions also help reduce ozone and other air particulates. And the goal of lowering emissions is the backbone of the zero emissions vehicle program, which was started by California through its waiver.

“There’s a whole game of three-level chess going on here,” said Paul Farrell, assistant director for air planning at DEEP. “It’ll be like if you throw a big rock into a pond and the rings are just going to ripple out.”

While no one’s talking about specific legal action from Connecticut yet, Attorney General George Jepsen joined two earlier multistate letters – in June 2017 and October 2017 – opposing the effort to consider rolling back standards.

“My office has been, and will continue to be, in regular contact with other states on this issue as we coordinate our response to the announced rulemaking,” Jepsen said in a statement. “We will not stand idly by while this administration attempts to dismantle clean air protections designed to protect the health and well-being of Connecticut residents.”

An attempt to rescind the California waiver would present an entirely new legal challenge. “It’s never happened,” said Patrick Parenteau, a professor in the Vermont School of Law’s Institute for Energy and the Environment. “Bush 2 denied California’s waiver. But before the court could rule, Obama was elected and he approved it.”

Parenteau believes Pruitt probably will rescind it, which means the whole matter is likely to end up in court for years, leaving the auto industry facing regulatory uncertainty about what cars to build. Even without court fights, the rule-making process for new standards could take years on its own.

It’s familiar territory for Claire Coleman, who, before becoming climate and energy attorney for the Connecticut Fund for the Environment, served on the Democratic staff of the U.S. Congress’s Oversight and Government Reform committee involved with the midterm review that Pruitt wants to dump.

She said contrary to what Pruitt said the review found that the new standards were feasible technologically.

“Given the clean car standards are critical to improving Connecticut’s air quality, this could be devastating,” she said of the EPA’s decision. As for the idea that Pruitt might rescind the California waiver: “I’m very concerned,” she said. “It’s one of those things – I almost don’t even want to say it out loud.