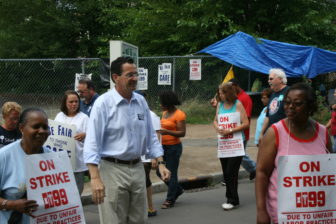 The state’s largest healthcare workers’ union suspended plans Friday to strike on April 18 at 250 group homes for the disabled to give state officials time to consider boosting funding for these services.

But SEIU Healthcare 1199 New England also warned that its members would meet on April 25 to assess any state response, and that another strike notice could be forthcoming.

“I share your concern that after a decade without changes in provider rates, the employees who staff group homes, day programs and other services under contract for the state are losing their ability to sustain themselves and their families on stagnant wages.

About 2,500 union members are working under old contracts — some that expired as early as 2013 — at private group homes that receive state funding. These facilities primarily serve clients with intellectual and developmental disabilities.

Starting wage rates currently range from $12 to $14 per hour. Poor state funding not only has caused low wages, the union asserts, but also high turnover and a lack of affordable health care benefits.

“We appreciate the outreach of his (Malloy’s) office and discussed the request with our members,” Jennifer Schneider SEIU 1199 spokeswoman, said.  “While our members remain committed to fighting for proper funding for their services, they have agreed to postpone the strike. It is our hope that the governor and legislators take this opportunity to make it a top priority to provide proper funding for these services that will allow fair wages for workers and quality care for people with disabilities.”

“We are pleased to see the members of 1199 have agreed to defer their strike,” Chris McClure, spokesman for the governor’s budget office, said Friday. “With this additional time, it is our sincere hope an agreement will be reached that is fair to both sides. The administration will continue to work with the parties and the legislature to assist the resolution and achieve the best possible conclusion.”

State officials are grappling with their own fiscal problems.

The General Fund for the current fiscal year, which ends June 30, is on pace to close $198 million in deficit, according to Comptroller Kevin P. Lembo.

And the preliminary budget for the 2018-19 fiscal year, according to the governor’s budget office and the legislature’s nonpartisan Office of Fiscal Analysis, would run $265 million in deficit, unless adjusted.

Schneider added that the union could reauthorize a strike — with 10 days notice — at any point after April 25, if sufficient progress has not been made.