Ned Lamont, the wealthy Greenwich businessman who electrified progressives with an antiwar challenge to Sen. Joseph I. Lieberman a dozen years ago, easily won a straw vote for governor Friday at the Connecticut AFL-CIO’s political convention, an unusually early effort by labor to shape the crowded race for the Democratic nomination in a pivotal election year.

The 48-percent vote was a boost for Lamont, who also won the loudest applause of the five Democratic gubernatorial candidates, but it was not nearly strong enough to convince delegates to attempt to make a formal endorsement. A two-thirds vote is necessary to make an endorsement, something that might be difficult before the primaries in August.

But labor is intent on trying. Its leadership pointed to a Republican gubernatorial field that snubbed labor’s invitation to address 216 delegates from 67 union locals in Hartford. The leaders see that as a reflection of a GOP intent on weakening collective bargaining rights for public-sector workers, especially as they apply to pension and health-care benefits.

Tom Foley, the GOP gubernatorial nominee in 2010 and 2014, addressed the AFL-CIO in each of his campaigns, knowing he could not win its endorsement. But he shied away from the frontal assaults on collective bargaining that are applause lines for most of the GOP candidates this year. 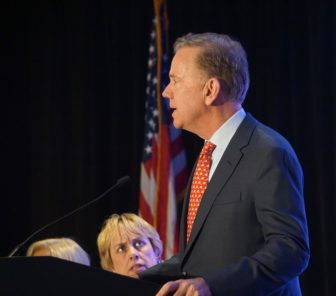 The straw vote, a first for the AFL-CIO, was a blow to Susan Bysiewicz, the former secretary of the state. She finished fourth with 10.9 percent, just ahead of the 9.5 percent who chose, “No one at this time.” Bridgeport Mayor Joseph P. Ganim was last.

Jonathan Harris, the former state senator and consumer protection commissioner, was second with 14.7 percent, followed by the former veterans affairs commissioner, Sean Connolly, with 11.4 percent. Ganim had 6.6 percent. The vote was conducted online after all five candidates spoke.

“I think it was a disappointing day for Susan,” said Sal Luciano, the executive director of AFSCME Council 4. “I think she came in as the front runner.”

Pelletier said the convention Friday was the earliest effort by labor to engage its members in a race for governor and marked the first time labor tried to express a preference for candidates before the parties’ nominating conventions in May.

“The problem with having it in June is that the parties have made the decision for us,” Pelletier said. “We wanted a bite at the apple before the parties go to their conventions.”

Hartford Mayor Luke Bronin, who declined to fill out the AFL-CIO’s  online candidate questionnaire, was not invited. The survey asked candidates to check “support” or “oppose” in response to 39 questions, ranging from support for collective-bargaining laws to specific initiatives such as a $15 minimum wage, paid family medical leave, higher taxes on the wealthy and a fee on large employers whose low-wage employees rely on the state for subsidized health care and other services. The survey allowed candidates to offer a written explanation for topics on which they checked “oppose.” 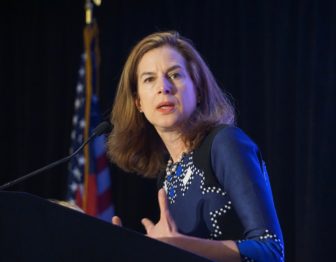 Bronin said he found the format too confining. Instead, he answered the questions in writing.

“I strongly support the right to organize and the right to collectively bargain, and I have tremendous respect for what the AFL-CIO does and fights and advocates for, working families here and in the state of Connecticut,” Bronin said.

Pelletier told the delegates Bronin was the only Democrat who objected to the format.

In the AFL-CIO’s view, Bysiewicz and Harris answered 100 percent of the questions correctly, while Lamont was at 97 percent, Ganim at 95 percent and Connolly at 82 percent. Lamont checked “oppose” on supporting the fee on employers with low-wage workers and yes on everything else.

All five candidates in the straw poll addressed the delegates. None were present when the poll results were announced. 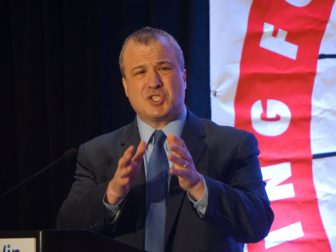 Lamont, who lost a Democratic gubernatorial primary to Gov. Dannel P. Malloy in 2010, was relaxed, joking from the podium with Luciano, who is retiring in May, and noting that a Greenwich businessman probably was not central casting’s idea of a labor favorite

He paused. His audience laughed.

“The right to organize is a right that makes us a fundamentally better state,” Lamont said. “It’s not where you’re from. It’s where you stand. I’m going to stand with you.”

After the vote, he issued a statement of thanks: “I am proud to stand up for working families, for fair wages and benefits, and the dignity of collective bargaining. I am so proud to have their support, and if elected governor, I will  fight every day for the working people of Connecticut.”

State Rep. Michael D’Agostino, D-Hamden, won a five-way straw poll for attorney general with 47.7 percent, followed by Chris Mattei at 24.8 percent, state Rep. William Tong, D-Stamford, at 11.4 percent, and Clare Kindall at 7.4 percent. State Sen. Paul Doyle, D-Wethersfield, one of three Democrats in the Senate to support a GOP-crafted budget, got no votes. When the results were announced, David A. Roche, a Building Trades union leader, yelled, “That’s what you get messing with labor.”

The delegates screamed and applauded.

Another 8.7 percent voted for “No one at this time.”

By voice votes, the delegates formally endorsed the five Democrats seeking re-election to Congress: John B. Larson of the 1st District, Joe Courtney of the 2nd District, Rosa L. DeLauro of the 3rd District and Jim Himes of the 4th District. Two years ago, Himes was the only Democrat who did not seek labor’s endorsement.

Comptroller Kevin Lembo and Secretary of the State Denise Merrill also were endorsed.