The top Democrat in the House of Representatives asked his Republican counterparts Tuesday to abandon their longstanding practice of issuing a GOP budget this spring.

With just under one month left before lawmakers leave the Capitol — most to run for re-election — Speaker Joe Aresimowicz, D-Berlin, said both parties should focus only on a bipartisan plan to rebalance finances this fiscal year and next.

But House Minority Leader Themis Klarides, R-Derby, said Republicans won’t forfeit their option to bring their fiscal proposals directly to the public. Were it not for numerous GOP fiscal plans made public, she added, last year’s nine-month-long budget debate might still not be over.

“We are not working on our own budget,” Aresimowicz said while meeting with Capitol reporters before Tuesday’s House session. “I emphatically beg other leaders not to be wasting time and resources on that. Let’s all get to the table and do it together.”

The current fiscal year’s General Fund is on pace to finish June 30 nearly $200 million in deficit. With just $210 million in the state’s emergency reserves and neither party inclined to raise taxes in a state election year, there is little margin for error.

And fiscal analysts say the preliminary budget for 2018-19, unless adjusted, will run about $265 million in deficit.

The speaker said if either party wants to hold a press conference to discuss one or a few specific ideas, that’s fine. But if the GOP releases a comprehensive budget specifically to demonstrate how they would manage finances differently from the Democrats, he added, that serves no purpose.

“Let’s get in a room”and negotiate, Aresimowicz said. “We’re all adults.”

Both parties really need good news later this month. The hope is that shortly after the April 17 deadline for state income tax filings has passed, analysts will upgrade expectations for revenues, for both this fiscal year and next.

Both parties also have some changes in common they want to make to the 2018-19 budget, including:

Ritter added that with the House narrowly split 79-71 and the Senate divided evenly, the only chance for anything to get done is through bipartisan cooperation. 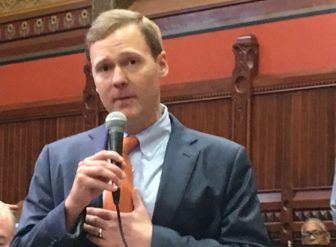 “If people are just throwing rehashed proposals out there, then, to me, that is just a political issue,” he said.

Republican leaders have said since the session began in early February they still intend to release their own plan to the public. Klarides said Tuesday that nothing has changed.

“I appreciate his (Aresimowicz’s) opinion, but we can’t get to a bipartisan budget unless we start out with all four caucuses (developing) individual ideas,” Klarides said.

But does the GOP want to share those ideas directly with the voters?

“I would never give up my right or my caucus’s right to share ideas or give a press conference or any other way to give out information,” Klarides said. “Why would I ever give that up?”

Many Democratic legislators anticipate a Republican budget proposal would include a proposal to cut state employee benefits after June 30, 2027 — when the current benefits contract expires — but reap some of the savings now. Republicans offered that proposal on several occasions in 2017.

Malloy, many Democratic lawmakers, and union leaders all insist this would be illegal. GOP leaders disagree.