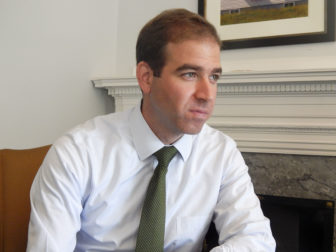 The new $567.3 million budget technically increases spending by 1.4 percent, or $8.1 million, beyond projected city expenditures for the current fiscal year.

But Bronin’s latest plan includes a new initiative to save millions of dollars over the next five years by paying $20 million in cash for capital improvement projects — which typically are financed outside of the budget. About $10.5 million for the capital program would come from the operating budget and another $9.5 million from off-budget sources.

If those new cash payments are not counted, the plan cuts spending by about one-half of 1 percent, or $2.3 million, below current spending levels.

Bronin, whose plan also must be acted upon — for the first time — by a new state oversight panel, also is seeking to build about $10 million in labor savings achieved by union concessions and other means this fiscal year.

“Over the past two years, we have confronted a full-blown fiscal crisis, decades in the making and rooted in the fact that Hartford is a small city with more than half of its property tax-exempt,” the mayor wrote in his budget message. “We have faced that crisis honestly and transparently, with a commitment to achieving long-term sustainability and strength.”

The budget is balanced without any one-time revenues, without any asset sales, and without deferring pension obligations, according to the administration.  It does not include any new borrowing.

Bronin first warned legislators and Gov. Dannel P. Malloy in the second half of 2016 that the capital city was at risk of insolvency in 2017. This was due to a combination of surging local debt costs — tied to an array of financing gimmicks employed by prior administrations — long-term poverty trends and dwindling state payments to offset state, college and hospital properties that are exempt from local taxation.

City staff, excluding police, fire and other emergency personnel, is down 16 percent, or 437 positions, from the 2015 fiscal year. And while Bronin said his budget would continue to recruit police and fire personnel, and shield local education, it maintains cuts to a wide array of personnel and programs achieved over the past two years.

Funding for the city library and recreational centers essentially would remain flat, as would aid for centers to assist the abused and homeless.

The plan is expected to draw far more scrutiny from state officials then ever before.

That’s due, in part, to a new debt assistance agreement reached last month between the city and the state. The latter was represented by Gov. Dannel P. Malloy’s budget office and by state Treasurer Denise L. Nappier, and they signed the agreement for the state.

Bronin, who was exploring a run for governor, cited the politics of that deal in forgoing the race Monday.

“I don’t want anyone to undermine our city as a way of getting at me, and I cannot let Hartford’s future become the casualty of a political fight,” Bronin said.

Some legislative leaders from both parties have asserted the deal, through which Connecticut would pay off more than $540 million in city debt over the next two or three decades, went beyond the level of assistance legislators intended.

Lawmakers set aside $28 million in this fiscal year and again in 2018-19 for general aid to fiscally distressed communities that work with the new state Municipal Accountability Review Board. Legislative leaders from both parties said they anticipated Hartford would receive roughly $20 million of the $28 million to be distributed by the review board.

Another $20 million was set aside in the budget — in both this fiscal year and next — to help Hartford cover payments on its general obligation debt. Lawmakers also agreed that the city would seek to refinance its debt over the long-term, and that the state would guarantee this refinancing.

But Republican leaders in the House and GOP and Democratic leaders alike in the Senate said they didn’t envision the state making any debt payments on behalf of Hartford after the 2018-19 fiscal year.

The only exception would be if the city defaulted on a payment. At that point, the state — as guarantor of the refinancing — would have to cover the defaulted payment.

Both Bronin and Malloy have said the agreement is in total compliance with the authorizing language written into the state budget last October.

Since that deal was executed, two major Wall Street credit rating agencies have upgraded the city’s rankings significantly, citing the state assistance as the primary reason.

The City Council will hold a public hearing on the mayor’s budget proposal on April 26. The state’s Municipal Accountability Review Board also is expected to begin its review of the plan immediately.

The co-chairs of the review board, Nappier and Office of Policy and Management Secretary Ben Barnes, did not comment on the proposal immediately after its release Monday.