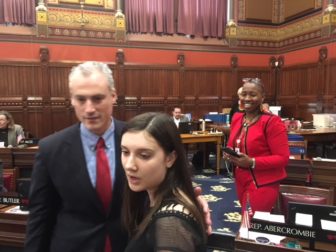 Reps. Derek Slap and Robyn Porter with Megan Storiff-Cave, a West Hartford high school student who  testified in support of the bill.

The House of Representatives overwhelming approved a bipartisan pay-equity bill Thursday that would place Connecticut in the small but growing ranks of states that bar employers from asking applicants about their pay history. It now goes to the Senate, where a similar measure died last year without a vote.

House Majority Leader Matt Ritter, D-Hartford, said the political environment for acting has only grown more favorable since last year, ensuring passage again in the House. The Senate is seen as unlikely to block passage in an election year when every legislative seat is up for election.

The House vote was 142-4, with opposition from four Republicans: Anne Dauphinais of Killingly, Doug Dubitsky of Chaplin, Craig C. Fishbein of Wallingford and Rob Sampson of Wolcott. Sampson said he he saw barring employers from questioning applicants about pay history as intrusive on employers.

“The bill itself actually does nothing more than restrict an employer in the ability to ask questions of potential employees — and I don’t think that’s our business to tell people that they can’t do that,” Sampson said.

The vote last year was 139-9. Republicans Mike France of Ledyard, John Fusco of Southington, Robin Green of Marlborough and John Piscopo of Thomaston supported the bill Thursday after voting no in 2017. Another no vote, Republican Cara Pavalock-D’Amato of Bristol, was absent Thursday after recently giving birth.

The theory behind the pay equity law is simple: Women historically earn less than men, even for similar jobs, so relying on pay history only will continue inequities. The bill passed Thursday does not bar an applicant from using pay history to negotiate for higher pay.

She said she was encouraged by the bipartisan support.

“It gives me hope. I’ve never really cared for Ds and Rs. I just think that we should be here serving the people of the state of Connecticut, but I get it — it’s about policy, it’s about politics,” Porter said. “But for me that means a lot because it means we we were actually able to come together and agree on something and put it out in a fashion that gets the job done.”

Four states have similar laws on the books, but none have been in effect long enough for researchers to determine if they are working. A Massachusetts pay-equity law that passed with the support of the Boston Chamber of Commerce in 2016 doesn’t take effect until July 1.

Rep. Derek Slap, D-West Hartford, another sponsor, said work on the current bill began at the close of the 2017 session.

“As soon as the bill died last year, we started working together in a bipartisan pay-equity group, and we actually reached out to the Boston Chamber of Commerce. They were a leader in helping to get this bill passed in Massachusetts,” Slap said. “We had a conference call with them, Republicans and Democrats on the phone together.”