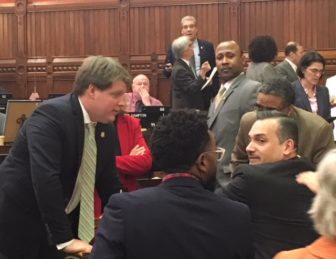 Rep. Roland Lemar, left, reassuring other urban lawmakers that the weakened housing bill was worth support.

The House of Representatives voted 76-72 Tuesday to approve and send to the Senate an affordable-housing bill sought by Gov. Dannel P. Malloy to push two dozen Connecticut communities to end their prohibition on multi-family housing.

Before the partisan vote, the bill was stripped of financial penalties for violators — the loss of discretionary state aid — but Malloy applauded its passage as a small but important step toward loosening zoning regulations.

“Access to fair and affordable housing is good for families, communities, and for businesses,” Malloy said. “While it is unfortunate that it was amended to remove some enforcement mechanisms, this bill remains a step in the right direction.”

Rep. Roland Lemar, D-New Haven, the chief sponsor in the House, had to scramble to reassure some urban lawmakers after voting began that the loss of financial penalties did not neuter the measure. The voting machine was left open while Lemar huddled with Rep. Juan R. Candelaria, D-New Haven, who initially voted no.

“It’s not everything we hoped it would be, but it’s still good,” Lemar said.

House Speaker Joe Aresimowicz, D-Berlin, stood in the well of the House, watching the tally board light up in blocks of green on the Democratic side and red on the Republican side. On the dais, Deputy Speaker Bob Godfrey, D-Danbury, watched a counter that would tell him when the green lights, signifying yes votes, outnumbered the red no votes.

On the tally board, Candelaria’s name flipped from red to green.

“Bob,” Aresimowicz said, calling up to Godfrey, “As soon as you get it, bang it.”

With a bang of the gavel, Godfrey closed the vote and ordered the clerk to announce the tally. Yeas: 76. Nays: 72. Not voting: 2. The bill passed.

A half century after Fair Housing Act: ‘We are segregated’

Two Democrats, Daniel Rovero of Killingly and Pat Boyd of Pomfret, voted with 70 Republicans in opposition. No Republican supported the bill.

“This critical vote by the House of Representatives is the first step toward enacting reasonable zoning reform in the State of Connecticut,” said Evonne M. Klein, the state housing commissioner. “It’s no secret that our state remains one of the most segregated in the nation. By ensuring our zoning laws better reflect the needs of our towns and cities, our residents will have greater access to opportunity.”

Only 20 of Connecticut’s 169 cities and towns allow multi-family housing, which is defined as three or more units, as a right under their zoning regulations, two dozen bar it and the rest allow housing of three or more units by special permit.

The bill requires zoning regulations to provide for, rather than encourage, a variety of housing development opportunities to meet local and regional needs. It eliminates a requirement the regulations be made to consider the “character” of a district, an ambiguous phrase. 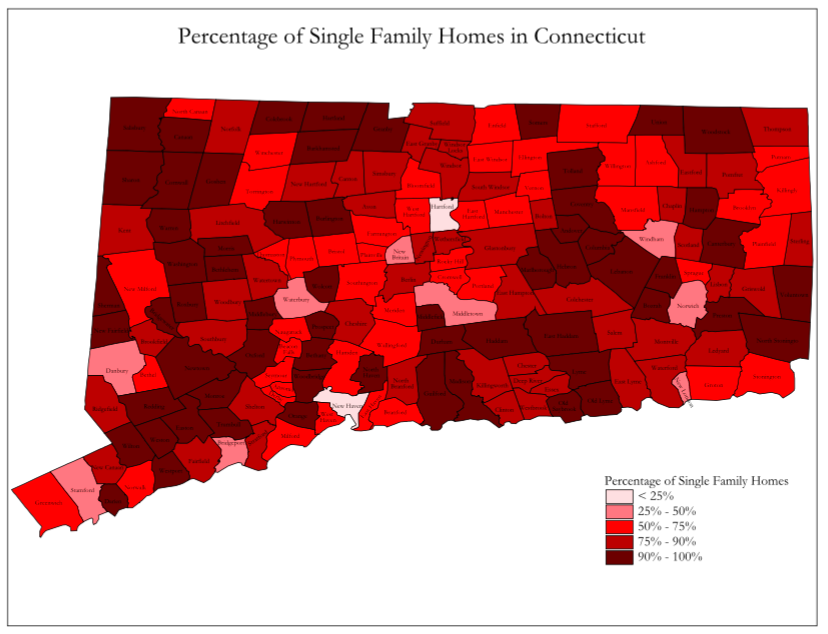 Connecticut: the land of single-family homes.