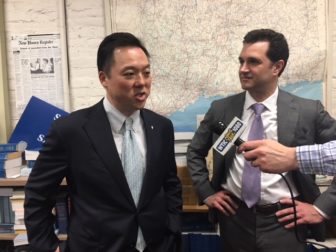 Rep. Michael D’Agostino, D-Hamden, a commercial litigator who quickly became an unexpected champion of progressive politics in a short-lived exploratory campaign for state attorney general, endorsed Rep. William Tong, D-Stamford, on Wednesday in the four-way race for the Democratic nomination for A.G.

The endorsement is a boost for Tong, a Democrat from what had long been a Republican district who never has enthralled liberals, despite a strong progressive record on issues ranging from gun control to LGBT protections as co-chair of the legislature’s Judiciary Committee.

“I know William. I know what he stands for. I’ve seen him stand up in the House for hours on end, standing up to the NRA, defending a woman’s right to choose, defending domestic violence victims,” D’Agostino said, standing next to Tong at a press conference. “You name it, you’ve been there.”

At a recent AFL-CIO convention, D’Agostino cemented his status among progressives by winning a five-way straw poll with 47.7 percent, followed by Chris Mattei at 24.8 percent; Tong at 11.4 percent; and Assistant Attorney General Clare Kindall at 7.4 percent. Sen. Paul Doyle, D-Wethersfield, one of three Democrats in the Senate to support a GOP-crafted budget, got no votes.

D’Agostino’s withdrawal from the race last week and his endorsement should help Tong get a new look from labor activists and other liberals who tend to dominate Democratic primaries.

“Mike has become in a very short period of time a seminal voice for progressives in this state. That’s just a fact,” Tong said. “He had tremendous support among progressive activists and in the labor community. And that happened in a matter of months.”

Tong, himself a commercial litigator, said his reputation as more of a political centrist stemmed less from his voting record than from the district he represents: “I took on a Republican incumbent in 2006, and I’m the first Democrat to hold my seat.”