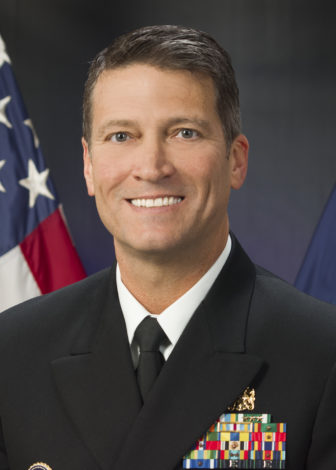 His nomination was hampered by a number of allegations about Jackson’s professional conduct, including allegations he was “abusive” to his colleagues, loosely handled prescription pain medications and was periodically intoxicated on the job.

In a statement announcing his withdrawal, Jackson, who has served as the top doctor leading the White House medical team, slammed allegations of improper behavior leveled against him as “completely false and fabricated.”

“If they had any merit, I would not have been selected, promoted and entrusted to serve in such a sensitive and important role as physician to three presidents over the past 12 years,” Jackson said. “Going into this process, I expected tough questions about how to best care for our veterans, but I did not expect to have to dignify baseless and anonymous attacks on my character and integrity.”

Sen. Richard Blumenthal, D-Conn., a member of the Senate Veterans’ Affairs Committee, which is tasked to vet the nomination, blamed Trump for the implosion of the nomination.

“The White House bungled this nomination from the start – fumbling the facts and vetting and then failing to produce documents,” Blumenthal said. “Veterans deserve a first-class manager with unquestionable integrity and ability.”

Blumenthal also said  Trump must now “fulfill the obligation all of us have to our nation’s heroes by nominating a first-class leader who will enhance and expand veterans’ health care, jobs, skill training and other essential services.”

“In the meantime, this deeply flawed process should end the administration’s repeated failures in screening and scrutinizing top-level nominees,” Blumenthal said.

Trump’s cabinet has had a high rate of turnover and a number of cabinet official have faced scrutiny over their spending habits and other actions, including Environmental Protection Agency Administrator Scott Pruitt and Housing and Urban Development Secretary Ben Carson.

According to his official biography, Jackson had a distinguished naval career

Not only was he an honor graduate at the Navy’s Undersea Medical Officer Program in Groton, but his bio says Jackson was “uniquely qualified in submarine and hyperbaric medicine.” Jackson also was an instructor at the Naval Diving and Salvage Training Center in Panama City, Florida, and a diving safety officer at the Naval Safety Center in Norfolk, Va.

Jackson began his residency in emergency medicine in 2001 at Portsmouth Naval Medical Center, finishing at the top of his class and receiving the honor graduate designation, his official biography says.

But even Trump acknowledged Jackson lacked a background in running a large government agency, something that concerned both Democratic and Republican lawmakers.

A confirmation hearing for Jackson in the Senate Veterans’ Affairs Committee had been scheduled for Wednesday, but was postponed indefinitely to give panel members time to assess allegations about the candidate’s behavior.

On Tuesday Trump called Jackson “one of the finest people I have ever met,” and  said it was up to the candidate to decide whether to continue with the arduous nomination process.

“I don’t want to put a man through a process like this.” Trump said. “It’s too ugly and disgusting.”