Will Democrats, Republicans beat the buzzer with a budget deal? 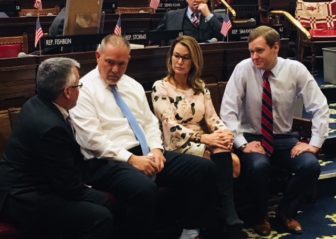 With the General Assembly facing an adjournment deadline of midnight Wednesday, negotiations over the state budget hinged Tuesday on whether to focus on short-term fiscal and political needs or grapple with the economic challenges facing the lawmakers and new governor who will take office in January.

Republicans pressed House Speaker Joe Aresimowicz, D-Berlin, to call a vote on their proposed revisions to the second year of the biennial budget, which they say will reduce deficits projected for the next two years.

But Aresimowicz and House Majority Leader Matt Ritter, D-Hartford, said a debate on a proposal lacking the votes for passage would be political theater, wasting valuable hours as the clock runs out on the 2018 session. The risk, they said, is time would run out without addressing either immediate needs or longer-term challenges.

House Minority Leader Themis Klarides, R-Derby, was seen talking during the House session to Aresimowicz and Ritter about a potential deal to limit debate on the GOP measure — and test Aresimowicz’s contention it has no chance of passage in the House, where Democrats hold a 79-71 majority. Their conversations were to continue in private later Tuesday.

With an unexpected influx of tax revenue in recent weeks, much of it deemed by administration officials to be non-recurring, a relatively small amount of money separates the Democrats and Republicans on the budget for the fiscal year that begins July 1.

Democrats have suggested limited revisions, such as reversing budget cuts to programs benefitting Medicare and Medicaid recipients, as well as ensuring that state aid to municipalities does not suffer further reductions. Senate Republicans say the legislature should be more ambitious — even with less than two days until adjournment.

“I think you have different visions and ideas of of what our roles as legislators are,” Klarides said. “Is it to just stick gum in a hole and try to move forward so you can go out on election day and tell people, ‘Look what I did for you?’ Or really just have a holistic, larger approach, not only fixing things for this fiscal year, but fixing the out years and making structural changes and policies that move Connecticut forward?”

House Democrats say that by pressing for sweeping reforms, the Republicans are risking making important, if limited, fixes that would affect needy constituents and taxpayers. Without the Democratic fixes, the governor would have no choice but to hold back state aid to communities to keep the budget in balance.

“I am more concerned about the final product and looking at the folks that are affected by the budget cuts on July 1st,” Aresimowicz said.

Unless adjustments are made to the preliminary 2018-19 budget enacted last October, legislators are staring at: Cutbacks in prescription medication aid to more than 110,000 poor elderly and disabled patients; huge savings directives that Gov. Dannel P. Malloy must achieve — mandates that led him to reduce municipal aid by $91 million this fiscal year; and a statutory cap on municipal property taxes on motor vehicles that rises from 39 mills to 45 mills.

Democrats and Republicans have two choices, Ritter said. One is to focus only on problems that spark overwhelming, immediate and bipartisan concern.

“Or we’ll play Russian Routlette, run a 270-page document that nobody’s read — and take the chances that nothing becomes law,” he said, referring to the GOP plan.

Ritter painted a grim picture for those legislators waking up Thursday morning after the session has ended with no budget adjustments. “The governor runs the state of Connecticut,” he said. “Good luck to your towns.”

Fasano: What about post-election deficits?

Fasano countered there is more at stake.

Ignoring those realities and saying what we nee to do is just patch this thing together … is not a plan,” Fasano said. “That to me is why we’re in this trouble.”

Despite the recent surge in state income receipts this spring, nonpartisan analysts are projecting deficits that surpass this windfall in each of the first two fiscal years after this November’s state elections.

Rapidly rising pension and other retirement benefit costs tied to more than seven decades of poor savings drive much of that problem, coupled with huge debt costs and an economy that — despite the April income tax surge — has lagged the nation since the last recession.

With that as context, Fasano said Connecticut can’t afford to get fiscally sloppy. He charged Democrats on Monday with crafting budget revisions that are littered with holes.

Their plan ignores $20 million in cost overruns in mental health, correction and other accounts this fiscal year, providing the same adequate funding levels in 2018-19 without adding funds or scaling back programs.

And while it adds more than $50 million per year to the Special Transportation Fund, that is not enough to cover the debt service on the added borrowing for transportation financing that Democrats support. Fasano said he believes the fund would be at risk of insolvency again within a few years.

More importantly, the GOP budget includes a broad array of recommendations to scale back huge projected deficits in the first biennial state budget after the November elections.

When the 2018 session opened in May, Malloy’s budget office was warning that state finances, unless adjusted, would run well over $2 billion in deficit in each of the first two fiscal years after the election.

These problems are far greater than the roughly $800 million to $1.16 billion the two budget plans would leave in the state’s emergency reserve by the end of the 2018-19 fiscal year.

The Republican budget currently on the table wipes away hundreds of millions of dollars in post-election red ink by canceling or suspending previously approved tax breaks and municipal assistance that legislators from both parties have conceded probably can’t be delivered after the election.

Look just a little down the road, Fasano said, and the differences between the two plans become clear.

According to nonpartisan analysts, the latest Democratic budget would run up deficits approaching $2.5 billion in the first year after the election and $3.1 billion in the second.

The GOP plan chops $640 million off the shortfall in the first year and $700 million in the second.

“You’ve got to have a vision,” Fasano said. “They don’t have the gumption … to really look at the hard issues and make decisions.