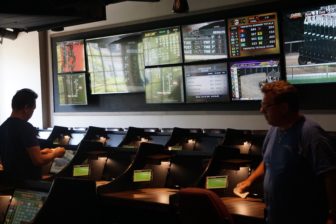 The owner of this OTB in Stamford would love to add sports betting.

The Connecticut General Assembly is unlikely take up on-line gambling when it returns in special session to consider legalizing sports betting — viewing betting by smartphone as a concept that needs deeper study and public input, legislative leaders said Friday.

“A special session does not lend itself to something so complicated,” said House Majority Leader Matt Ritter, D-Hartford. “How do you verify age? How does it work when you go across the border? Are there daily limits?”

“We really need to have the capacity for a full public hearing process and have it vetted. Unlike other issues, there’s not necessarily a deadline that is required of us to act,” said Deputy House Minority Leader Vincent Candelora, R-North Branford. “I think generally all the caucuses are concerned. I don’t believe there is one caucus saying we should bring it up.”

Connecticut currently has limited on-line gambling: Patrons of off-tracking betting, a relatively small niche in legal gambling, can bet on horses, dogs and jai alai using their home computers or a smartphone app.

Gov. Dannel P. Malloy said he will take direction from the legislature over the breadth of new gambling compacts he is negotiating with the state’s two federally recognized tribes, the Mashantucket Pequots and Mohegans, in response to a U.S. Supreme Court ruling that opens all states to sports betting.

A week ago, Malloy sounded resigned to on-line betting on sports, but he told reporters Friday that legislative leaders have told him lawmakers are open to sports betting at brick-and-mortar facilities, but not so via the internet. He said he will convey that to the tribes.

“I think that the tribal nations are in a position to deal with reality, and if the reality is the legislature is not going to take up online gaming separate and apart from whatever is required from sports betting, that’s the situation,” Malloy said.

Tribal representatives have met three times with the administration to talk about new gambling compacts, Malloy said. The governor participated in one session. His legal counsel, lawyers from the state attorney general’s office and others are in the talks.

A special session will not be called until a new compact is struck.

If Connecticut legalizes sports betting, then the tribes are permitted under the federal Indian Regulatory Gaming Act to open sports books at their casinos, Foxwoods Resort Casino and Mohegan Sun. Unclear is whether the tribes have a claim on a share of the state’s sports action or even exclusive rights to sports wagering under their gambling agreements with the state.

At issue is whether sports betting, long offered at Las Vegas casinos, is a casino game. The tribes now pay Connecticut 25 percent of their gross slots revenues in return for exclusive rights to all casino games, a deal that produced about $270 million for the state in 2017.

Sportech, which has rights to pari-mutuel betting on horses, dogs and jai alai at its 16 off-track betting parlors in Connecticut, would love to offer sports betting.

Overall, the state’s cut from the billions wagered on slot machines, the lottery, OTB and charitable games is about $590 million, down from a high of $717 million in 2006. That was the year Yonkers Raceway opened the Empire City casino, putting 5,300 video slot machines just off I-95 between New Yorkers and the Connecticut casinos.

MGM Resorts International, which has been lobbying legislators to open Bridgeport to casino gambling as an entree into the New York market, recently struck a deal to buy Empire City and Yonkers Raceway.