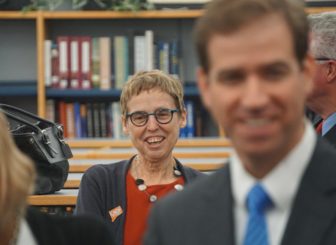 Betty Gallo stayed in the background at a bill signing Thursday.

Betty Gallo arrived at the State Capitol in 1976, hired by Common Cause to lobby for an ethics code, a set of rules for the unregulated business of exerting influence over a poorly paid, part-time legislature. It marked the start of a wild ride for a petite woman with a North Carolina accent, deep-to-the-bone progressive instincts and appetite for battle.

No more. Gallo is stepping away, retiring from a Connecticut lobbying industry that she didn’t invent, but certainly refined by both her business practices — gathering dozens of non-profit groups under one lobbying umbrella  — and the first law she was hired to help pass and defend: An ethics code that became possible after the hydra-headed scandal that was Watergate.

On Thursday, she stood to the side of the Bulkeley High School library in Hartford, watching Gov. Dannel P. Malloy sign a bill pushed by a coalition that included one of her 43 clients, Connecticut Against Gun Violence. The measure bans the sale and possession of bump stocks, the mechanism that can make a semi-automatic rifle function like a machine gun.

“It was a horrible session, but a good session. We had a lot of victories. This was a good way to go out,” Gallo said. “I wanted to go when I was still having victories and doing a good job, and time to do something else.”

The victories include same-sex marriage, civil rights for transgender individuals, gun control, abortion rights, repeal of the death penalty, legalization of medical marijuana, fair housing laws, the first-in-the-nation needle exchange to combat AIDs and finding the money for anti-poverty programs that never seemed to have enough.

Gallo will leave her firm, Gallo & Robinson, on Oct. 31, when it will become the property of her long-time business and lobbying partner, Kate Robinson. The 2018 session was her 41st and her last, one tinged by the disappointment that her friend, Associate Justice Andrew J. McDonald, was not confirmed as chief justice of the Connecticut Supreme Court.

“Will you reconsider?” Rep. Steven Stafstrom, D-Bridgeport, teased after the bill signing.

Her client, Jeremy Stein of Connecticut Against Gun Violence, was one of the featured speakers Thursday. He thanked members of the coalition behind passage of the bill, forgetting one.

“I just realized I did not thank you,” Stein said after the ceremony. “You’re on the top of the list.”

Gallo smiled and waved him off. 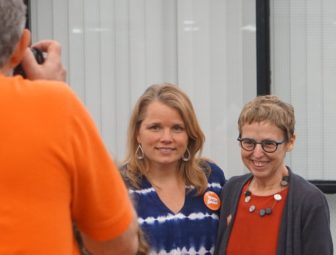 Terra Lynn Volpe of Action Together Connecticut wanted a photo with Betty Gallo, right, after the bill signing.

Terra Lynn Volpe of another gun-control group, Action Together Connecticut, asked Gallo to pose with her for a photo.

Gallo’s career was the product of serendipity. She transferred to Trinity College in Hartford for her senior year, one of the first women to admitted, following the boyfriend she would marry and — after the births of two children — divorce. She lived in West Hartford, where she got involved in local politics and the League of Women Voters.

One of the League officials was on the board of Common Cause, which was looking for someone to lobby in Hartford on ethics. Common Cause hired Gallo, a less-than-obvious choice to convince a hostile legislature it needed ethics rules.

“I had never been to the Capitol when they hired me,” Gallo said.

The ethics bill passed, though Gallo claims no credit. Gov. Ella T. Grasso demanded its passage, overcoming the objections of the insurance industry and Connecticut Business and Industry Association, which found the new rules onerous, if not unconstitutional

The Insurance Association of Connecticut and CBIA sued. Common Cause intervened, seeking in discovery how much money the groups spent lobbying.

“I made a deal with CBIA, and that was first time, you know, this is how it works. You work it out,” Gallo said. “They didn’t want that much.  They wanted something called the ‘Harry Gray amendment.’ ”

Gallo ran for the state House of Representatives in 1980, her campaign run by two close friends, Howard Rifkin and Ruth Pulda. Happily, she said, she lost to Republican Bob Farr, who would have a long career at the Capitol, though not as long as Gallo’s.

Clients had a magical way of coinciding with her politics. In the early years of the AIDS crisis, when she started losing friends to the disease, she was hired to lobby for a law creating a needle-exchange program.

“It’s those kinds of things,” she said, “when you were in the middle of a crisis, somebody calls and says, ‘Will you?’ ”

During the bank crisis, a fair-housing group asked her to work on sub-prime mortgage reforms.

In 2004, when Pulda lost her hair to chemotherapy, she discovered that health insurance did not cover wigs after chemo treatment for cancer. Pulda, a feminist and labor lawyer who would die from cancer four years later, was enraged. She successfully pushed for a new law. Her lobbyist was Gallo.

The bill was one of many aimed at improving health coverage for women that Gallo successfully championed. Another was mandated coverage for contraception.

“We did a lot of things around women,” Gallo said.

In 1986, Gallo was hired to lobby for the state’s first gay rights bill, a relatively modest measure by today’s standards. It barred discrimination on the basis of sexual orientation in housing and employment. With significant loopholes for religious institutions, it passed in 1991.

In 2005, she dropped a gay-rights client that directed her to lobby against same-sex civil unions, which granted marriage rights in most ways other than name, in favor of an all-or-nothing push for gay marriage. After coaxing legislators to embrace civil unions, Gallo said, she could not suddenly demand it was marriage or nothing. Key allies in the legislature agreed with her decision, and the civil union law passed months later.

Gov. M. Jodi Rell, a Republican, signed the bill and made Connecticut the first state to grant such legal status to gay couples without pressure from the courts. Three years later, the state Supreme Court struck down the law in favor of marriage.

With others, Gallo successfully lobbied for passage of a bill that codified the court’s decision.

This year, Gallo sat in the House gallery with David Pickus, a union leader, watching the passage of a contract that will raise wages, provide workers’ compensation and increase holiday pay for thousands of private-sector, personal-care assistants who are directly employed by their elderly and disabled clients, but paid through state and federal programs.

Workers exulted at final passage. Gallo said she turned to Pickus and said, “This is why you do it.”