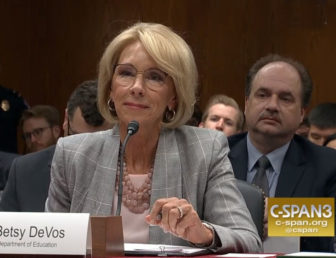 U.S, Secretary of Education Betsy DeVos: “I don’t think they can.”

Washington – Under questioning by Sen. Chris Murphy on Tuesday, Secretary of Education Betsy DeVos reversed herself on whether a school can call Immigration and Customs Enforcement on students believed to be undocumented.

DeVos was testifying about the U.S. Department of Education 2019 budget request, appearing before a Senate Appropriations subcommittee, of which Murphy is a member.

The Democratic senator tried several times to prod DeVos to answer “yes” or “no” to the question of whether a teacher or school administrator had the right to call ICE on an immigrant student.

But DeVos chose to give less direct answers.

“I think a school is a sacrosanct place for students to learn,” she said.

She gave her most direct answer to the senator after his sixth try.

During a U.S. House of Representatives education committee hearing last month, DeVos drew fire after asserting that whether a school reports a student to ICE is “a school decision, it’s a local community decision.”

DeVos’ statements caused a furor among advocacy groups, who pointed out that under the Supreme Court case Plyler v Doe, all children — undocumented or not –are entitled to a free public education.

DeVos frequently says there should not be a “one-size-fits-all” standard for education, with local communities taking the lead.

She has also been criticized for implementing a new protocol that allows her agency’s civil right office to dismiss hundreds of complaints that are part of serial filings or considered burdensome to the office.

“The role of the department is an important one in protecting the civil rights of students,” DeVos said.

“So, there should be a one-size-fits-all standard for civil rights?” he asked.

DeVos also told Sen. Patrick Leahy, D-Vt., that a new school safety commission is not tasked with examining the role of guns.

“That is not part of the commission’s charge per se,” DeVos said.

She said the commission would instead be focused on the roughly 20 areas that the White House had outlined for it.

Those areas include considering new age restrictions on firearms. The commission was formed following the mass school shooting in Parkland, Fla., on Valentine’s Day.