Mary Glassman, a Democrat running for Rep. Elizabeth Esty’s seat in the 5th Congressional District, hopes to fend off primary challenger and political neophyte Jahana Hayes with stories of her political experience, her own hardscrabble upbringing and an intense focus on local issues.

Glassman, 59, her party’s choice for the seat, declared her candidacy just hours after Esty abruptly ended her campaign in April. Esty decided against re-election after drawing fire for mishandling a sexual harassment complaint against her chief of staff.

“I jumped into this race immediately because this race is so important, the stakes are so high,” Glassman said.

To Glassman, those stakes include helping the Democratic party seize control of the U.S. House from the GOP by keeping the 5th District seat “blue,” and joining her party’s fight against President Donald Trump’s policies.

“Democracy is being eroded every day,” Glassman said. “There are attacks on health care, education, seniors and veterans every day… Our core democratic values are being eroded by this administration.”

Glassman, a former first selectman of Simsbury, has some statewide name recognition, having run twice for lieutenant governor. In 2006 she ran on a primary ticket with then-Stamford Mayor Dannel Malloy and won — though Malloy lost. She and the Democratic gubernatorial  nominee John DeStefano lost to Republican M. Jodi Rell in that general election. Four years later Glassman switched partners and ran on a primary ticket with Ned Lamont, but they lost to Malloy and then-Comptroller Nancy Wyman.

That Glassman won that first bid for lieutenant governor “is a sign that she has some political strengths and political skills,” said Ron Schurin, a University of Connecticut political science professor.

Glassman will face Hayes and, possibly another Democrat, Shannon Kula who is petitioning to be on the ballot, in the August 14 primary. The winner of that inter-party contest will run in the general election  against the winner of the GOP primary,  either former Meriden Mayor Manny Santos; Ruby O’Neill, a  retired psychology professor from Southbury; Rich DuPont, a manufacturing consultant from Watertown; or John Pistone of Brookfield, who  is petitioning for a place on that ballot, too.

But for now, Glassman is focused on  Hayes, 49, a former national teacher of the year who has never run for political office and who, if she won the seat, would be the first black woman to represent Connecticut in Congress.

Hayes has an impressive life story. She grew up with her grandmother in Waterbury’s toughest housing project and became a teenaged mother at 17.

Glassman said she, too, is familiar with adversity because of her childhood in New Britain. Her mother grew up in foster homes and her father died when Glassman was 4, forcing her family to survive on scant Social Security and retirement benefits.

“As a kid growing up, I was pretty vulnerable,” she said. “Now I have the tools I need and the security I need… I am going to fight hard so kids have access to education and the same kind of opportunity I had, and make sure people can rely on Social Security and veterans benefits.”

With a renowned teacher in the race, education is likely to be a hot topic in the Democratic primary for the sprawling 5th District, which includes much of the western part of the state. Glassman, who has served as the director of the Office for Regional Efficiencies at the Capitol Region Education Council since 2015, is equipped to do battle.

Glassman said she also plans to stump on the idea of regionalism, of convincing the district’s cities and towns to work together to get a better response from Washington D.C. on transportation funding and other issues.

Lisa Heavner, who succeeded Glassman as Simbury’s first selectman, said her predecessor  wanted people to work together and cities and towns to save money by sharing services and equipment.

She said representing the district in Congress “is the perfect job” for Glassman “because she has been committed to public life.”

But other Democrats say they’d prefer a new fresh new face to run for the seat. They also want racial diversity in Connecticut’s all-white congressional delegation.

Sen. Chris Murphy is apparently among them and helped persuade Hayes to run.  One of the senator’s staffers and the wife of another top aide are also working on the Hayes campaign.

Glassman said she had considered Murphy a friend and political ally, and shrugged off his support of Hayes. “What matters to me are the voters of the 5th District, not that a U.S. senator is backing a candidate,” she said. 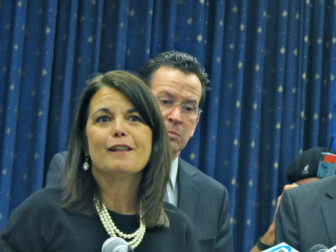 Glassman with Dannel Malloy. She was his primary running mate in his first attempt at the governor’s seat in 2006. He lost. She won.

Glassman hasn’t just suffered political disappointment at the polls. In 2015,  Republican members of the Simsbury board of selectmen voted to cut her pay by 35 percent following a consultant’s report that recommended some of the first selectman’s duties be spread among other town staff members, and the first selectman’s salary be cut accordingly.

“There was quite a bit of outrage,” Heavner said.

The pay cut left Glassman little alternative, she said at the time, but to resign from her second term.

The rivalry between Glassman and Hayes boiled over during the May 14 Democratic convention for the 5th District. When the votes were in, Hayes, who had entered the race just 12 days before, was up, 172-168 from delegates from the district’s 41 cities and towns.

But after several delegates switched their votes, Glassman had a 173-167 advantage and her supporters called for the vote to be closed. Hayes still won enough support for her name to be on the ballot, but her supporters fumed that a racist injustice had been done.

If she wins the primary, Glassman will still need to keep running hard.

The 5th District has the highest number of unaffiliated voters in the state, and is often considered a Republican target.

“This district is a tough district,” she said.

Although anti-Trump fervor may drive Democrats to the polls in November, Republicans have had a lift from the unpopularity of Malloy, Glassman’s former running mate. But Glassman said she thinks neither Trump or Malloy will make much difference.

“I think this is going to be a local race,” she said.

But she is also aware of there are plenty of Republicans in the district. “I see a lot of Trump signs,” she said.

Glassman is running in a political “Year of the Woman,” when an unprecedented number of female candidates are running for Congress and for governor, boosted by the #MeToo movement. 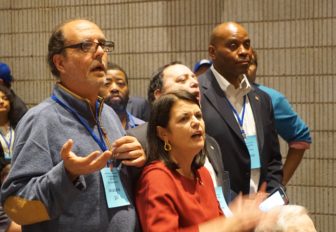 Mary Glassman, surrounded by supporters, waiting for the tally to be closed at this year’s 5th District convention.

That dynamic may not benefit Glassman if she runs against a male Republican because of Esty’s failure to protect a female staffer from abuse, said Kelly Dittmar, who studies gender and politics at the Center for American Women and Politics at Rutgers University.

“There was a presumption that a woman would be better at handling this issue, but it didn’t’ happen here,” she said.

Still, Glassman, Hayes or for that matter, O’Neill, may benefit by running on their gender, Dittmar said.

“More are saying ‘being a woman and having the experiences of living life as a woman brings experiences to the job’,” Dittmar said.

Connecticut has sent seven women to Congress, and it is a woman, Rep. Rosa DeLauro, D-3rd District, who has the most seniority in Connecticut’s delegation in to the U.S. House.

“Both Esty and DeLauro, through their seats in Congress, have worked on policies to empower women,” Dittmar said.

While Connecticut has elected female governors, the state has yet to elect a female U.S. senator, “so there’s progress left to make,” Dittmar said.

Glassman, who earned undergraduate and law degrees at the University of Connecticut, is married to Hartford attorney Andrew Glassman. They have three adult children.