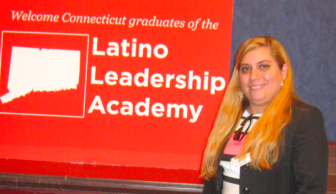 Washington – The growth of Connecticut’s Latino community is increasing its political clout and fostering the ambitions of Milagros Acosta and other Hispanics to pursue a career in politics.

“Everything is possible,” said Acosta, who emigrated from Peru when she was 22 years old.

Acosta, 40, is one of 17 recent graduates of the Latino Leadership Academy, an organization formed by Sen. Chris Murphy, D-Conn., and the General Assembly’s caucus of Hispanic Democrats and supported by the state’s congressional delegation.

On a trip to Washington this week to see firsthand how Congress operates, Acosta and her fellow graduates share a penchant for activism and community work. They were all in the second class of the academy, which graduated its first class last year.

Acosta, who lives in West Hartford, is a social worker who also works as an outreach coordinator in the General Assembly.

“I’m very involved in my community,” she said. Her ambition is to be elected to the state House or Senate one day.

The growth in Connecticut’s Latino community has not been matched by political representation. Although there has been an increase in Latinos in elected office, it lags  the state’s growth in Hispanic residents and voters in the General Assembly. There has never been a Latino in the state’s congressional delegation and only two in the state Senate.

“It pains me to see so many fantastic leaders in the Latino community who feel there’s a barrier to getting in in politics,” Murphy said. “I wanted to build a bridge.”

According to a Pew Research Center study, 15 percent of the state’s residents were Latino in 2016. About 540,000 Hispanics lived in Connecticut in that year, the center said, and the state’s Hispanic population was the 18th largest in the nation.

Meanwhile, those attending the academy benefit from five classes offered on Saturdays in January and February that teach organizing, public policy, advocacy skills, invaluable insight into how the political system works, as well as a two-day seminar in the U.S. Capitol. 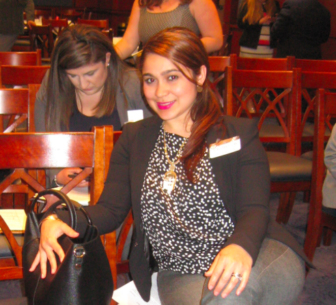 Angela Peralta, 31, another academy graduate, is vice chair of the New London Democratic Town Committee. She hopes one day to run for city council, but says he has a 4-year-old son so she’s “kind of waiting” to advance a political career.

Arriving in Connecticut from the Dominican Republic when she was 15 years old, Peralta is a high school teacher who says there’s a shortage of minority educators in Connecticut schools.

She said Latinos are politically underrepresented in the state, but that things are improving.

“I notice change,” she said. Politicians “know the Latino community is very active and they have a voice.”

Concerns about diversity on the statewide Democratic ticket helped boost the late candidacy for lieutenant governor of Eva Bermudez Zimmerman, a union organizer who lives in Sandy Hook and is of Puerto Rican decent. Only three days after declaring her candidacy, she easily qualified for the primary in August.

But to Yolanda Castillo, a former Hartford councilwoman who recently won a seat on the Manchester Board of Directors, there’s a lot to more to do to bring diversity to Connecticut’s political establishment and more outreach needed to Latinos. 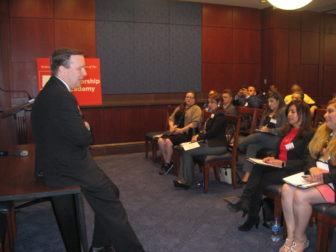 “The numbers [of Latino elected officials] are getting better, but [other politicians] are not paying us enough attention. They think we don’t come out to vote,” she said.

Still, Connecticut’s Hispanic voter eligibility is greater than that of many states. The state ranked 13th in the nation in the share of the Hispanic population that is eligible to vote.