A cordial GOP debate, until Malloy is mentioned 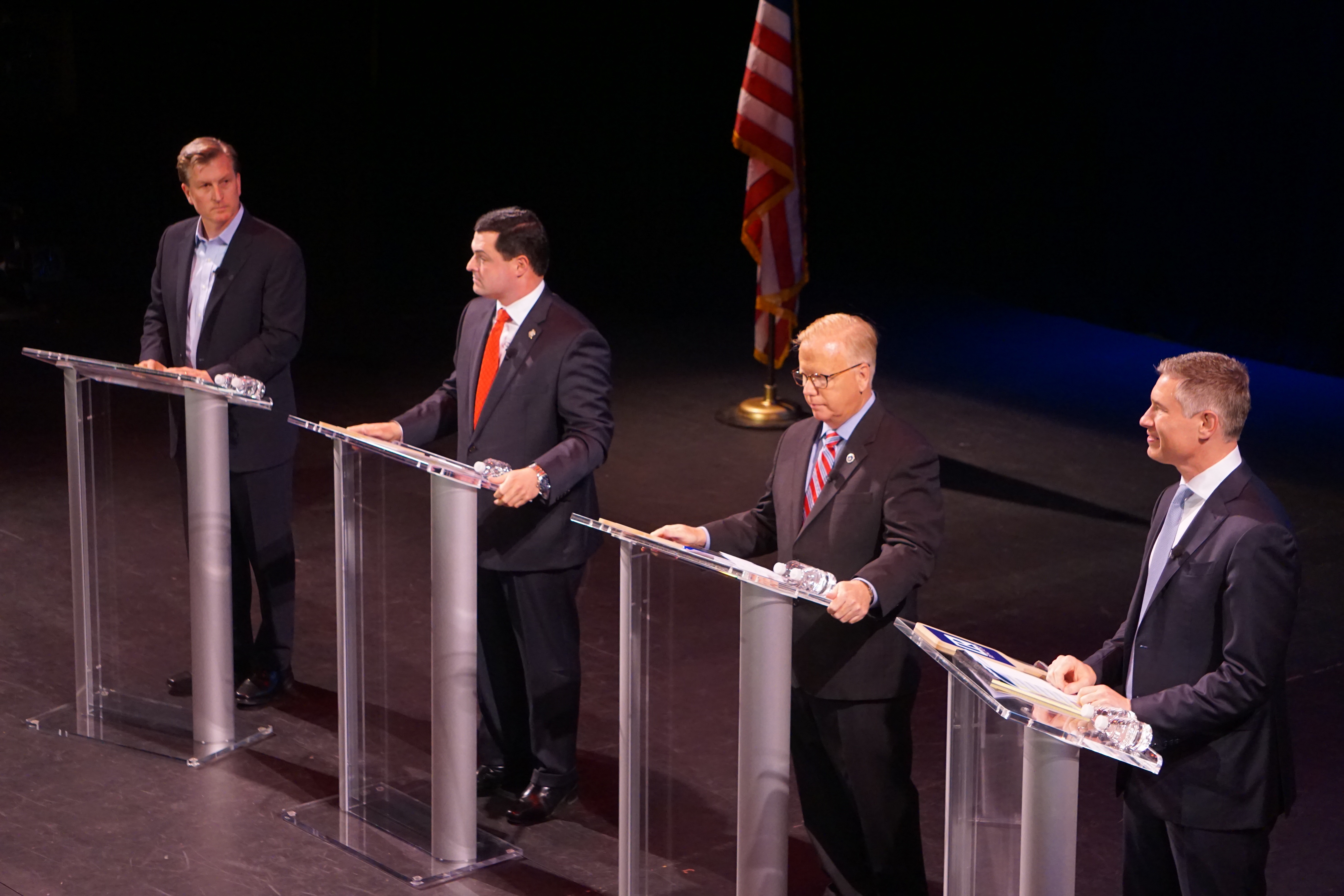 New Haven — In the first debate since the Republican field of gubernatorial candidates shed a half-dozen candidates, a quartet of GOP contenders talked tough Monday night about immigrants, state spending, tolls, public-sector unions and Gov. Dannel P. Malloy  — pretty much everything and everyone but each other.

The one-hour debate before an audience of 1,100 at the Shubert Theater was sponsored by CT Realtors and televised live on WCTX, the sister station of WTNH, Channel 8.

Bob Stefanowski, a political newbie whose early television advertising has given him an edge in private polling, declined to attend, as did Shelton Mayor Mark Lauretti, who was uncertain Monday if he would be able file sufficient petition signatures by the 4 p.m. Tuesday deadline to qualify for the Aug. 14 primary.

It seems more likely that Republican voters this summer will have five choices on the GOP ballot: the three who qualified at the state convention last month — Boughton, Herbst and Obsitnik — and Stefanowski and Stemerman, two self-funders who bypassed the convention in favor of a petition drive. Both say they have collected sufficient signatures.

Boughton, the convention-endorsed candidate and a former leader of the Connecticut Conference of Municipalities, showed no sympathy for Hartford, an easy target for Republicans seeking suburban votes. He declined an invitation to consider wealth inequality as one of the causes of fiscal stress in Hartford and cities other than Danbury, which has low unemployment.

“Frankly, I think Hartford should have been allowed to go bankrupt,” Boughton said. “They need some tough love at this point.”

Herbst, who did not seek re-election last year as the chief executive of the Bridgeport suburb of Trumbull, similarly took a tough view of struggling cities, saying the causes of their distress was bad management, not the confluence of poverty and limited tax bases.

“We have to stop rewarding bad behavior,” Herbst said.

A viewer’s question about whether the candidates would welcome President Trump to campaign with them drew laughter from the audience. No one suggested that Trump, who easily won the GOP presidential primary here and then decisively lost in November to Hillary Clinton, keep his distance from Connecticut.

“I’ll be very clear on this. I’m a military veteran,” said Obsitnik, an Annapolis graduate and former submariner. “I always support our commander in chief.”

But he quickly pivoted away from Trump, saying the president didn’t cause Connecticut’s problems, nor would he solve them.

Stemerman said he, too, supports the commander in chief. But he pivoted in a different direction, talking about the importance of his family values, without directly saying if they are odds with the thrice-married president: “Our own values are reflected for me in my family. I’m married to the same woman for 20 years. I have five children.”

The candidates all pledged to varying degrees to help the Trump administration enforce immigration laws. Herbst issued a warning to the mayors of Hartford, New Haven and Bridgeport.

“I am opposed to sanctuary cities,” Herbst said. “If I am elected governor, Luke Bronin, Toni Harp and Joe Ganim will understand very clearly that they will either comply with federal immigration officials or they they risk losing their funding from the state of Connecticut.”

All four indicated a willingness, or even an eagerness, to try to attack Connecticut’s unfunded pension liability by changing benefits dictated by a collective bargaining agreement that runs until 2027. Exactly how they would do that was left unclear.

“We can’t reform this. We have to restructure it,” Stemerman said.

“Let me be very straight with you. We need to eliminate the current pension system as it exists,” Boughton said. “We have almost 1,500 people out there who recive pensions of over $100,000 and one pensioner that gets over $300,000. Something is grossly wrong with the system.”

Herbst said he would not accept a pension, nor would his top appointees.

Obsitnik said he would declare a state of fiscal emergency to attack the unfunded liability, which is routinely rated as either the worst or among the worst in the U.S.

The Malloy administration has negotiated a more modest and sustainable system of retiree benefits for new employees, but the Republicans said the state must be more aggressive.

The candidates share one thing in common with Malloy: Like the Democrat, who is not seeking re-election, they see the state’s aging transportation infrastructure and its depleted special transportation fund as major challenges. All promise better transportation, though none committed to new revenue.

Ned Lamont, the presumptive Democratic nominee, is open to electronic tolling as a source of transportation revenue, but the Republicans said the state needs to be more efficient in transportation spending, not impose tolls on motorists.

Too much transportation money has been deferred for other uses, they said.

Boughton expressed a similar opinion, albeit more colorfully: “I will strap myslef to a poll on I-84 before I let a single toll come into this state.”

Stemerman said after the debate that the candidates did not offer sharp distinctions.

“The challenge with a format like this is even though we’re now down to four candidates there is only so much time — with a one minute response, it’s going to be hard for anybody to distinguish themselves,” he said.