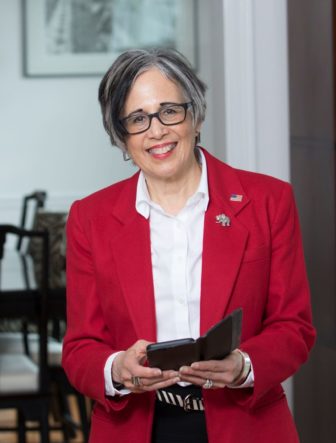 “Republicans traditionally have not been successful with Latinos and women and I am both,” O’Neill said. “I am a package deal.”

An immigrant from Honduras, O’Neill, 65, was once a single mother who had to begin her life anew after a contentious divorce.

She now hopes to begin a new chapter of her life in Washington as a Republican who would succeed Rep. Elizabeth Esty in representing the state’s sprawling 5th District, which encompasses 41 town and includes much of the western part of the state.

The district has been represented by a Democrat since 2007, when Chris Murphy, then a state senator, ousted GOP Rep. Nancy Johnson. The district likely would have remained in Democratic hands had Esty not decided to retire after this term in office, the result of a scandal over her handling of a sexual harassment complaint.  The other four congressional districts in the state are represented by Democrats, too.

O’Neill, who has never run for elected office before, says the Democratic grip on the state’s congressional delegation has left many Republicans in the state feeling underrepresented and even ignored.

“What I hear from these people is ‘We don’t have a voice,’” she said.

The 5th District has more unaffiliated voters than any other congressional district in the state and is considered to offer the best opportunity for a Republican congressional candidate.

“I am not going to Congress to be a ‘yes woman’ for anyone. I’ve got guts and a mouth and I’m going to use both when I get to Washington.”
Ruby O’Neill

“For a very long time the 5th has been considered very competitive,” O’Neill said. “The 5th is our best chance.”

Before she runs for that seat, of course, O’Neill must win what’s shaping up to be competitive Republican primary Aug. 14.

Former Meriden Mayor Manny Santos is the party-endorsed Republican candidate for the seat, having won the GOP endorsement at the party’s convention in mid-May.

But O’Neill won a substantial amount of support at that convention, more than enough for her to qualify for a slot on the ballot. Watertown businessman Richard DuPont also qualified to have his name on the ballot.

O’Neill does not know who her Democratic opponent will be. That will also be determined in the Aug. 14 primary. But one thing is certain: that Democratic candidate will, like O’Neill, be a woman.

Mary Glassman, the former first selectman of Simsbury, is the endorsed Democratic candidate; but former national “Teacher of the Year” Jahana Hayes also won a place on the ballot, and a third Democrat, Shannon Kula, is petitioning for her name to be on the ballot.

O’Neill said she does not know whether the primary will be tougher to win than a general election contest against a Democrat  in November. “Both are challenges,” she said. “You have to be at the top of your game for both.”

If elected to Congress, O’Neill would break an ethnic barrier in Connecticut politics. The state has never sent a Hispanic to Congress.

O’Neill said her family sailed into Baltimore’s  harbor from Honduras on Thanksgiving Day in 1954. The family then moved to the Bronx and began a process of Americanization. “My parents wanted us to assimilate,” she said.

After earning two master’s degrees and a doctorate, she eventually became a psychology professor, and was a mother of two with a physician husband living in Westchester, N.Y. She said her life was upended by her husband’s substance abuse problems and a bad divorce.

“We lost our house. We lost everything,” O’Neill said. 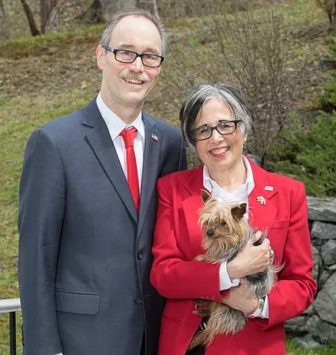 She became an advocate for the rights of women facing divorce, testifying before the general assembly on the need for Connecticut to enforce restraining orders from other states. State Rep. Arthur O’Neill, R-Southbury, who would become her husband about 10 years later, was among those impressed with her testimony. (They fell in love in 2008 after a blind date set up by a member of the Republican town committee.) The couple lives in Southbury.

In her role as a college psychology professor, O’Neill said, she was a staunch defender of free speech, seeing herself as conservative alternative to what she views as rampant liberalism on campus. “I told my students, ‘You have the right to an education, not an indoctrination,’” O’Neill said.

O’Neill was a founding executive board member of the Latino National Republican Coalition of Connecticut, giving the state’s Republican Latinos a place to press their agenda.

She said the nation’s Hispanics, who usually favor Democratic candidates by wide margins, are “a community that has been saturated by anti-Republican propaganda.”

J.R. Romano, the head of the Connecticut Republican Party, said O’Neill “did very well” soliciting delegate support at the state GOP convention, although she had announced her candidacy only 10 days before the event. “She has a tremendous network and that’s going to help her,” Romano said.

“She is extremely good when it comes to public policy,” said Werner Oyanadel, a senior analyst at the commission. “She is the mastermind of some of the legislative concerns that are being raised by the commission.”

Oyanadel said he sometimes differs with O’Neill on policy issues and his agency is non-partisan. Nonetheless, he said he encouraged O’Neill to run for Congress.

“She looks at the facts and lets the data drive her decisions” he said. “That’s exactly what we need. She’s an independent thinker.”

O’Neill vowed to bring that sense of independence to Washington, distancing herself from party leaders and President Donald Trump when she thinks she should. “I am not going to Congress to be a ‘yes woman’ for anyone,” she said. “I’ve got guts and a mouth and I’m going to use both when I get to Washington.”

O’Neill said she is a strong gun rights supporter. She splits with some Republicans by saying she thinks young undocumented immigrants who were brought to the United States as children by their parents should be protected from deportation.

At the top of her agenda, however, is combatting the opioid crisis.

“I know that jobs and education are important, but if we don’t slay this dragon we won’t have an economy,” she said.

O’Neill said she’s inspired by an old slogan from the tumultuous 1960’s. “DEFY MEDIOCRITY,” it said.