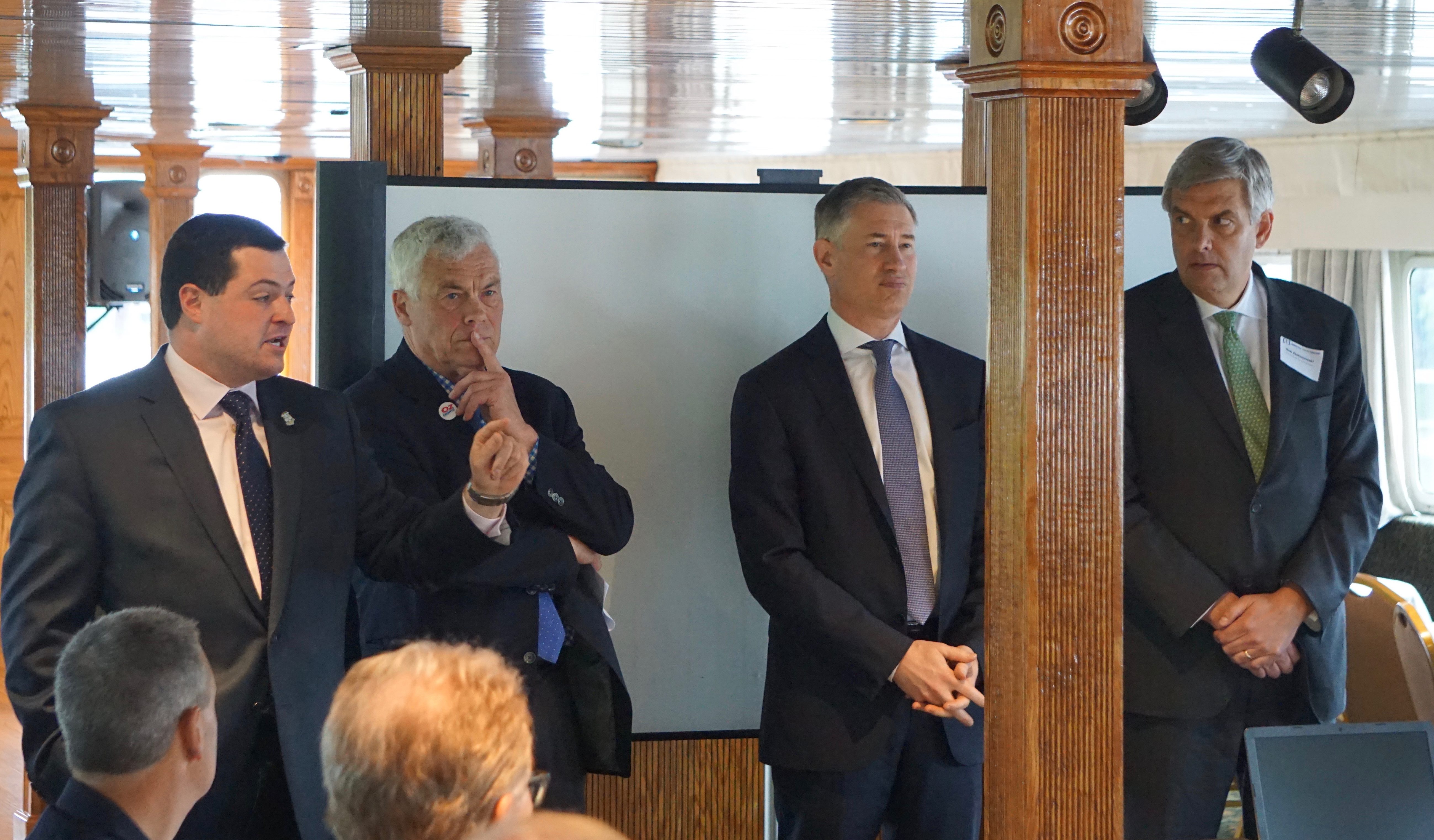 Middletown — There were three Republicans, a Democrat and an independent. Most sounded strikingly like Dannel P. Malloy did as a candidate for governor in 2010: They were incredulous at how little the state spends on marketing to tourists, and they promised to boost spending that tourism advocates say yields quick returns.

The question Friday for the tourism industry is whether any will do better than Malloy in sustaining spending for marketing. In his first year, Malloy delivered on a promise to increase tourism marketing to $15 million, up from the token dollar spent by his predecessor. But spending has suffered cuts nearly every year since, falling to $4.1 million.

Timothy Herbst, Bob Stefanowski and David Stemerman, who are three of the five Republicans running for governor, joined independent Oz Griebel and Democrat Ned Lamont in addressing the coalition aboard the Lady Katharine, a tour boat docked here on a wide bend of the Connecticut River.

None challenged the tourism industry’s rule of thumb: For every dollar a state spends in tourism marketing, it collects three in tax revenues. Stemerman, a former hedge-fund manager who is self-funding his campaign, ridiculed legislators for not accepting the industry’s offer: Give us a dollar, and we’ll give you three back.

“Why didn’t they take it? Because we live in Bizarro Land in Hartford,” Stemerman said. “They don’t understand that. But I’m a businessman, and I do understand this.”

Stefanowski, also a businessman seeking office for the first time, said state government should view tourism as a revenue source, and marketing is an investment.

“If I went to Jack Welch at GE and said, ‘Jack, you give me a dollar and I’ll return you three,’ he would have held me accountable for it, but he would have opened up the doors to the vault.  Why don’t we do it here?” said Stefanowski, a former GE executive.

As Malloy found in 2010, promising to increase funding for tourism marketing is easy, especially based on promises the spending will yield more taxes. As a group, the candidates have dodged more difficult issues of how to finance investments in transportation infrastructure, while proposing a long list of tax cuts —without saying how the revenue would be replaced.

Stemerman, for example, published a transportation plan this week that makes a case — a case made by others, including Malloy  –for investments  in highways, bridges, airports and trains . But Stemerman is light on details about how to pay for them, other than promising a much more efficient Department of Transportation and offering the potential of privatizing Bradley International Airport and other state-owned facilities.

Stefanowski, who hired supply-side economist Art Laffer to write an economic-development plan he released in December, told the group Friday that he would promote economic growth by slashing taxes, including the gradual elimination of the state’s single largest revenue source — the income tax.

“In the 15 years before Lowell Weicker put in what was supposed to be a temporary income tax of 1.5 percent, Connecticut was the fastest-growing state in the entire nation,” Stefanowski said. “Twenty-five years since, slowest in economic growth.”

The Weicker administration never suggested the state’s tax on wages would be temporary, nor did it propose a 1.5 percent levy. The tax took effect in 1991 with a flat rate of 4.5 percent. An existing tax on income generated from interest, dividends and capital gains that ranged from 7 percent to 14 percent fell to 4.5 percent.

Herbst and Stemerman told the tourism group to be wary of anyone promising to eliminate the income tax. Danbury Mayor Mark Boughton, the GOP convention-endorsed candidate, also promises to phase out the tax over 10 years.

The state is facing the twin challenges of projected budget deficits in coming years, as well as the long-term problem of unfunded pension-and-retiree health liabilities that routinely ranked among the worst in the U.S.

“We’re not going to eliminate the income tax or any tax in the state of Connecticut unless and until we address the 800-pound gorilla in the room, which is the unfunded pension and retiree health liability,” Herbst said.

Stemerman said eliminating the income tax would be wonderful, if only possible. “That’s a wonderful idea,” Stemerman said. “I’m a numbers guy, and I just can’t get the numbers to work.”

Stefanowski said his plan is viable, written by Laffer and endorsed by Larry Kudlow, the president’s economic adviser.

“Part of leadership is setting an aspirational goal, and getting people to rally around the cause,” Stefanowski said. “We did perfectly fine in this state before 1991 with zero income tax.”

The reality is more complex. Connecticut had one of the strongest economies in the U.S. in the mid-1980s, fueled in part by defense spending during the Reagan administration. But the state was economically flailing in the three years prior passage of the income tax.

It is also true Connecticut has struggled to grow jobs for much of the past 20 years. As The Atlantic reported last year, Connecticut has trailed every state but Michigan, Ohio and Mississippi.