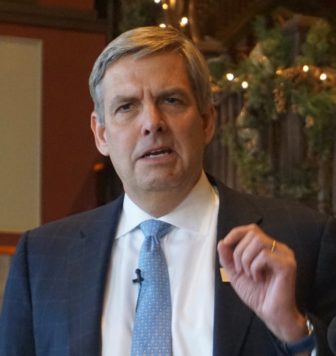 Republican voters will have at least four candidates for governor in the Aug. 14 primary as the secretary of the state’s office confirmed Monday that Bob Stefanowski had collected sufficient signatures for a place on the ballot.

Stefanowski, one of two Republicans who bypassed the GOP convention in favor of a petition drive, joins the three convention-qualified candidates: Mark Boughton, Timothy Herbst and Steve Obsitnik.

David Stemerman, who is petitioning, also seems likely to qualify. Petitioning for a place on a statewide primary requires gathering signatures from two percent of the voters in the candidate’s party. For Stefanowski and Stemerman, that is 9,081 signatures.

With petitions still coming in from local registrars, the secretary of the state’s office said it had counted 10,951 for Stefanowski and 6,572 for Stemerman by 4 p.m. Monday.

Stefanowski, formerly the chief financial officer of UBS Investment Bank and a senior executive at GE, is only the second candidate in Connecticut history to qualify for a statewide primary by petitioning.

The first was Peter Schiff, a Republican candidate for U.S. Senate, who succeeded in getting on the ballot in 2010, only to finish third in a three-way primary with Linda McMahon and former U.S. Rep. Rob Simmons.

Boughton, the mayor of Danbury, won the endorsement of the GOP convention. Herbst and Obsitnik were the only other Republicans to win at least 15 percent of the delegate vote, the threshold for a place in the primary.

The latest count for two petitioning Democratic candidates for governor was 11,486 for Bridgeport Mayor Joseph P. Ganim and and 3,542 for Guy L. Smith. They need 15,458 to force a primary against the convention-endorsed candidate, Ned Lamont.