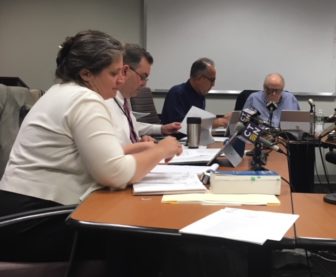 The State Elections Enforcement Commission approved public financing grants Wednesday for Republicans Mark Boughton and Timothy Herbst, two of the three gubernatorial candidates participating in the voluntary Citizens’ Election Program in 2018. The third, Steve Obsitnik, will have to try again next week for a fifth time.

The approvals mean that Boughton and Herbst can expect the electronic transfer of $1.35 million into their campaign accounts, allowing them to expand their field staffs in preparation for the Aug. 14 primary and think about joining one of their rivals for the GOP nomination, Bob Stefanowski, in airing television commercials.

Stefanowski and David Stemerman, the fifth Republican seeking the nomination for governor, have opted out of the program, which provides public financing in return for compliance with limits on spending and fundraising.

As is the commission’s practice, its staff declined to publicly identify the shortcomings of Obsitnik’s latest application. To qualify, a candidate for governor must collect $250,000 in contributions ranging from $5 to $100, and each contribution must be accompanied by a signed statement attesting to the identity of the donor.

“While we are obviously disappointed, we continue to work through technical issues with the SEEC around a small number of our donor forms,” said Dan Debicella, the manager of Obsitnik’s campaign. “We expect approval once those are satisfactorily dealt with, and meanwhile continue to build massive volunteer support for our on-the-ground efforts of door knocking, events and Steve meeting with voters.”

Michael Brandi, the executive director and general counsel of the commission, said the commission is not holding candidates to a stricter standard than in previous elections, but the crush of early applications, an increase in statewide primaries and staff reductions have slowed the reviews of applications in some cases.

“We’re doing our best to get it out,” Brandi said.

The commission’s audit staff was finishing the review of applications from Boughton and Herbst while the commission was considering other business. Brandi said the staff also been working overtime on weeknights and weekends.

No action was taken on applications from the three Democrats running for attorney general: William Tong, Paul Doyle and Chris Mattei; or the two competing for treasurer, Shawn Wooden and Dita Bhargava. All five need to provide further information.

No Democratic candidate for governor is seeking public financing. Ned Lamont, the convention-endorsed candidate, has opted out of the program and is largely self-funding his campaign, as he did in races for the U.S. Senate in 2006 and governor in 2010.

Bridgeport Mayor Joseph P. Ganim, who has successfully petitioned to force a primary, is barred from the public financing program due to his public corruption conviction in 2003. The secretary of the state’s office is still reviewing petitions filed by a third Democratic candidate for governor, Guy L. Smith.

Lamont’s campaign said Wednesday he has agreed to three debates before the primary, one sponsored by Hearst Connecticut Media and Sacred Heart University on July 26 and two others on dates to be determined. WFSB and CT Realtors with WTNH are organizing the other two.