Seek and ye shall find… but at SEEC, it can take a while 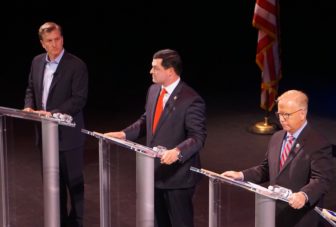 Steve Obsitnik’s campaign for governor will go before the State Elections Enforcement Commission on Wednesday morning to make its fourth try since May 23 for approval of $1.35 million in public financing for his Republican primary in August. Two GOP competitors, Mark Boughton and Timothy Herbst, also are on the agenda again.

The commission has yet to approve public financing for any candidate for statewide office this year, turning back applications that the staff’s auditors say do not yet meet the requirements of the Citizens’ Election Program. For a gubernatorial candidate, that means raising $250,000 in contributions ranging from $5 to $100, each accompanied by certifying paperwork.

Ninety percent of the qualifying money must be raised in Connecticut. Principals of state contractors or prospective contractors cannot make qualifying contributions. Neither can children under age 12, who can write checks even if they can’t vote until age 18.

Boughton’s campaign filed new paperwork Tuesday morning. Herbst did the same Monday. Obsitnik did his last week. While they wait for approval, their campaigns are free to continue spending — assuming they can obtain credit — up to $1.6 million, the spending limit for a primary imposed on participants in the voluntary public financing program.

“We’ll see what happens,” said Marc Dillon, the campaign manager for Boughton. “If it goes much past next week, it becomes an issue.”

Four years ago, Tom Foley, the eventual GOP nominee, didn’t get his public financing until July 2, but it took his competitor for the nomination, John P. McKinney, another two weeks. This year, the three Republicans participating in the program are up against two other GOP contenders who are largely self-funding campaigns, David Stemerman and Bob Stefanowski.

“You’ve got two of our guys and one of their guys out there spending money,” said Ben Proto, an adviser to Obsitnik.

Jon Conradi, the manager of the Herbst campaign, downplayed the delay. He said, “Our plan to win in August is unimpeded.”

The winner of the primary, if qualified for public financing, will get a grant of $6.5 million for the general-election campaign.

Ned Lamont, the convention-endorsed Democrat, is self-funding his third statewide campaign. He spent $20 million on a U.S. Senate campaign in 2006, winning the primary and then losing in November. In 2010, Lamont spent $9.6 million — all but $512,000 of it was his money — on a gubernatorial campaign in 2010 that ended with a loss in the primary. This year he faces a primary from Bridgeport Mayor Joseph P. Ganim, whose corruption conviction bars him from seeking public financing.

Stefanowski has been airing television ads for five months. This week, he spent $28,900 to air commercials on WFSB, Channel 3 during the local morning, noon and evening newscasts, as well as time on CBS Sunday Morning and the local public affairs show, Face the State. He had smaller buys on NBC30, News8 and Fox61.

“Bob is capable and willing to be competitive, not just through August — but November,” he said.

The secretary of the state’s office certified Stefanowski for the primary Monday and Stemerman on Tuesday, saying they had submitted signatures from more than two percent of all registered Republicans.

The public financing applications of three Democratic candidates for attorney general — William Tong, Paul Doyle and Chris Mattei — are on the agenda Wednesday for the second time.

The Citizens’ Election Program was created in a special legislative session in 2005 in response to the corruption scandal that forced the resignation of Gov. John G. Rowland in July 2004. Public financing was available for the first time in the 2008 legislative races and the 2010 statewide elections.

In 2010, Gov. Dannel P. Malloy became the state’s first governor elected using public financing, defeating self-funders who outspent him in the Democratic primary and in the general election.

Murphy, other Dems, propose legislation to boost U.S. manufacturing of N95 masks and other equipment as COVID cases spike.

It hasn't been a good two weeks for tallying votes in the 90th House District of Cheshire and Wallingford.

Photos: A day of protests in Hartford

by Yehyun Kim and Kelan Lyons

CT ViewpointsCT Artpoints
Opinion Connecticut healthcare is at a crossroads

by Andrew Giering and Carolyn Lusch

Sunday, Nov. 15 marked the World Day of Remembrance for Road Traffic Victims.  The Safe Streets Coalition of New Haven gathered on the New Haven Green to call for change in our city, and across Connecticut, to make streets safer for pedestrians, cyclists, and transit users.  As of Nov. 15, 12 pedestrians and cyclists have died this year after being struck by a vehicle in New Haven – an increase from the nine lives lost in 2019.  These entirely preventable deaths are not just statistics.

Opinion With COVID cases rising, Meriden should go to all online high school

I have been attending Meriden Public Schools my whole life. I am grateful for every opportunity that I have been given by my district and all of my teachers. A year ago, a thought like not going to school wouldn’t even be an option. As a senior, I need as much time in the classroom as I can to prepare myself for higher education. Lately, however, I have been risking the health of my family, and my community by attending school.