Stemerman pledges another $10M to his self-funded campaign 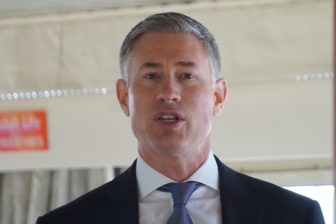 David Stemerman, the former hedge-fund manager who is self-funding a campaign for governor, sought to make a splash Monday by pledging to spend another $10 million in pursuit of the Republican nomination, seven times the $1.35 million available to three competitors relying on public financing.

The announcement comes 15 days before the next campaign finance report is due on July 10.

Stemerman said in an emailed statement his campaign will spend the money on  increased cable, digital and direct mail advertising statewide and buy time on New York broadcast television, an expensive and inefficient way to reach voters in Fairfield County.

He had invested $1.8 million in his campaign, as reported in the last public filing on April 10. Stemerman says he has since spent another $1 million.

“At a time when many business leaders downsized or left Connecticut to save their own money, I have decided to invest my own money to help save Connecticut.  Connecticut is where I was educated, raised my family and had tremendous success in business.  The American Dream has become my reality in this state.  I want to save Connecticut from the disastrous policies that have brought us to a fiscal cliff and rebuild its strengths, so our state offers opportunity to all,” Stemerman said.

The other candidate, Bob Stefanowski, is financing his campaign by a mix of self-funding and private fundraising. Stemerman’s supporters have tried to sow doubts about whether Stefanowski would have the resources to compete in the general election against Ned Lamont, the favorite in the Democratic primary who also is self-funding his campaign.