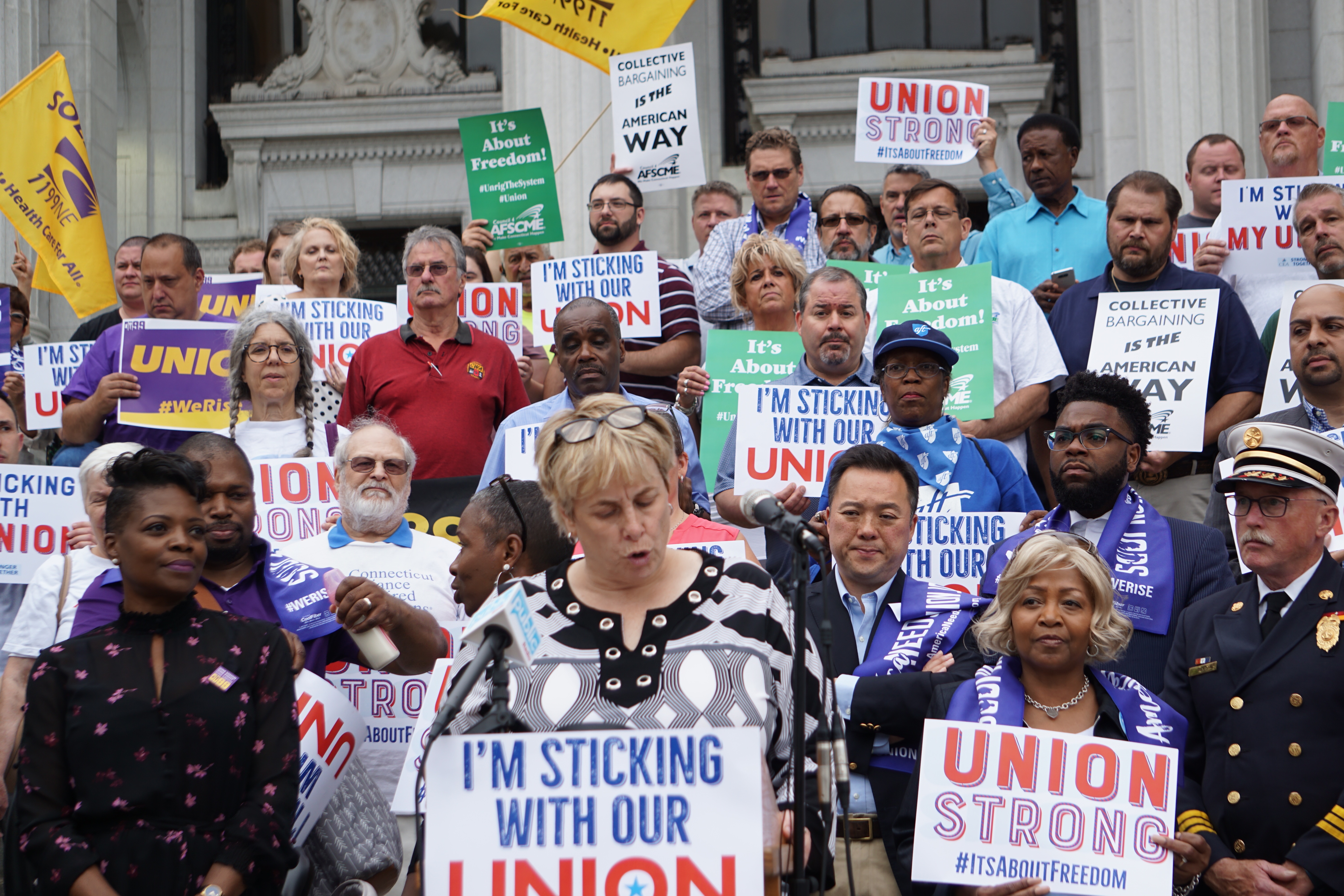 A U.S. Supreme Court decision Wednesday that weakens public-sector unions, whose members are the largest segment of organized labor and an influential Democratic ally in Connecticut politics, became an instant rallying point in the mid-term elections and potential wedge issue in the race to succeed Gov. Dannel P. Malloy as governor.

Danbury Mayor Mark Boughton, the convention-endorsed Republican candidate for governor,  praised the 5-4 decision as tilting the balance of power away from labor at the State Capitol, while Ned Lamont, the Democratic frontrunner, and the rest of the Democratic establishment denounced it as an attack on unions and collective bargaining.

At issue is the financial stability of public-sector unions, which collect $29.4 million in annual dues from 39,647 unionized state employees in Connecticut, and another $3.4 million in agency fees from 5,490 state employees who are not union members but benefit from union-negotiated wages and benefits.

The ruling in Janus. v. AFSCME, Council 31 allows non-union government workers to stop paying agency fees, reversing a 41-year-old precedent set in another case, Abood v. Detroit Board of Education. Abood allowed government workers to opt out of the unions and decline to contribute to union political funds, but they still could be assessed for a share of the costs incurred during collective bargaining.

Unclear Wednesday was the degree to which the decision would cost unions revenue beyond the lost agency fees in Connecticut, a state with the highest per-capita union membership in New England and one of the five highest in the U.S. Anticipating the ruling, AFSCME, AAUP and other unions have been trying to rally employees to remain active members.

The loss of agency fees will be felt unevenly. Modest in some bargaining units, it approaches 25 percent in others, such as a bargaining unit of 4,048 correctional officers, according to data obtained by CT Mirror from the comptroller’s office. A spokesman for AFSCME, which represents state and local government bargaining units with 30,000 employees, estimated that 90 percent are dues-paying members.

The longer-term impacts are more concerning for labor. Will it foster dissent in worker ranks between dues-paying members and those who essentially now will be getting representation for free? And will that dissent lead to an abandonment of unions, costing them additional revenue and forcing them into a downward spiral?

“The other side already puts $8 billion a year into busting unions,” Lori J. Pelletier, the president of the Connecticut AFL-CIO, said at a late-afternoon rally in Hartford. “They’re going to ratchet that up. Are some members going to fall victim to their shenanigans and their B.S.? Probably.”

The AFL-CIO organized a rally on the steps of the state Supreme Court, directly across the street from the State Capitol, where labor remains influential, even as once-unassailable Democratic majorities have steadily shrunk from two-third of members to a tie in the Senate and small advantage in the House.

Labor hopes that the loss in Washington will lead to electoral victories in Connecticut, as well as a sense among union members that collective bargaining is more vulnerable than ever and quitting a union would be counter to their interests.

“My sense is you already are seeing the response,” said Sen. Gary Winfield, D-New Haven, a union employee who was among the dozens of union members and supporters at the rally. “I think you might see an opposite effect from what was intended.” 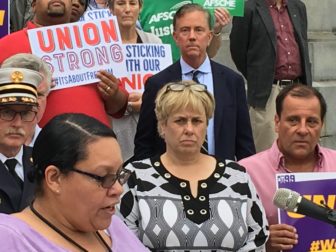 Lamont and Rep. William Tong of Stamford, the convention-endorsed candidate for attorney general, and Hartford Mayor Luke Bronin and Reps. Russ Morin of Wethersfield, Robyn Porter of New Haven and Brandon McGee of Hartford were among the politicians who joined the union members.

The sting of the Janus decision was compounded by the retirement announcement by Supreme Court Justice Anthony M. Kennedy, the swing vote between blocs of four conservative and four liberal justices. Kennedy joined in the decision written by Justice Samuel A. Alito Jr., who observed it may inflict an “unpleasant” transition on labor.

“We recognize that the loss of payments from nonmem­bers may cause unions to experience unpleasant transition costs in the short term, and may require unions to make adjustments in order to attract and retain members,” Alito wrote. “But we must weigh these disadvantages against the consider­able windfall that unions have received under Abood for the past 41 years. It is hard to estimate how many bil­lions of dollars have been taken from nonmembers and transferred to public-sector unions in violation of the First Amendment. Those unconstitutional exactions cannot be allowed to continue indefinitely.”

The case was brought by Mark Janus, a state employee in Illinois who refused to join AFSCME, but was assessed an involuntary agency fee, which he says violated his First Amendment rights to free association. Under Abood, AFSCME was entitled to charge a fee germane to its collective-bargaining activities — 78 percent of full union dues, as calculated in Janus’ case.

“This procedure violates the First Amendment and can­ not continue,” Alito wrote. “Neither an agency fee nor any other pay­ment to the union may be deducted from a nonmember’s wages, nor may any other attempt be made to collect such a payment, unless the employee affirmatively consents to pay. By agreeing to pay, nonmembers are waiving their First Amendment rights, and such a waiver cannot be presumed.”

In a dissent read from the bench, Justice Elena Kagan said the Janus case was the conclusion of a six-year effort by some members of the court — a campaign that was delayed by the death of Justice Antonin Scalia and the yearlong fight by Senate Republicans to block President Obama from naming a successor.

“Its decision will have large-scale consequences,” Kagan wrote. “Public employee unions will lose a secure source of financial support. State and local governments that thought fair-share provisions furthered their interests will need to find new ways of managing their work- forces. Across the country, the relationships of public employees and employers will alter in both predictable and wholly unexpected ways.”

The decision comes as most of the five Republican candidates for governor have expressed a willingness to curb collective bargaining for pension and retiree health benefits. In 2009, Republican gubernatorial contenders here declined to endorse the confrontational tactics of Wisconsin Gov. Scott Walker, who was a keynote speaker at the state GOP’s fundraising dinner.

Now, David Stemerman, one of the five GOP candidates, talks about the potential of going to court in an effort to reduce benefits for current retirees. Most of the GOP field have identified collective bargaining and union power as contributing factors to Connecticut’s unfunded pension liability, along with the state’s failure until recently to make actuarially required contributions.

While Boughton praised the Janus decision, he downplayed its impact on the Connecticut race, if only because he believes state voters have reached the same conclusion as GOP candidates.

“It really doesn’t play that much — only because I think there is consensus among most Connecticut residents that the current path we’re on is not sustainable, and a lot of that is driven by the collective bargaining agreements that are in place,” Boughton said. “People know that. They get that.”

Lamont said the decision highlights what is at stake in this election.

“Once again, this underscores the fact that elections have consequences,” Lamont said. “As governor, I would fight efforts to repeal or weaken any progress we have made to protect our families and make our communities stronger. I will do everything in my power to improve living standards for working families. I will also ensure that workers have the right to organize through collective bargaining and achieve a decent standard of living.”

Carol Platt Liebau, the president of the conservative Yankee Institute for Public Policy, said the decision is a victory for public employees, not a setback. It will allow government employees and teachers a choice and a voice as to whether they wish to support a union.

“Ultimately, for each individual government worker, it comes down to whether being part of a government union is the best choice for his or her family,” Liebau said. “Financial and membership decisions should be freely-made, not forced. Now Connecticut’s public-sector employees have the right to make those decision for themselves — as they should.”

Taffy Womack, an administrative assistant in the Secretary of the State’s Office who attended the rally, said the ruling could exacerbate already severe pay inequities, particularly among minorities.

National studies show unionized African-American workers earn 15 percent more than their non-union counterparts, said Womack, who is president of AFSCME Local 704. And among Latinos, the gap is 22 percent, she said.

“It’s about CEOs and billionaires spending their money and influence to rig the economy in their favor,” said Womack. “The forces behind Janus want to destroy the freedom of workers to come together and improve their lives.”

The cost of testing for coronavirus is public information

Connecticut taxpayers have no way of knowing how much they’re paying for each COVID-19 test. That’s because state Comptroller Kevin Lembo has redacted pricing information from contracts at the request of the vendors.