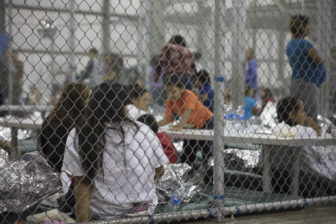 Sens. Richard Blumenthal and Chris Murphy say they were prevented by the U.S. Department of Health and Human Services from touring a facility in Groton on Friday that houses immigrant children.

“Earlier this week, we were told we had received approval to visit a home run by Noank Community Support Services in Groton,” the senators said in a joint statement. “Noank is doing incredibly difficult work to try to help these traumatized children. This morning, U.S. Department of Health and Human Services (HHS) informed us that we were no longer allowed to visit the children.”

An HHS official said “no visit from these members was ever approved.”

“We have had significant interest in members of Congress for tours,” the official said. “Given the need to make sure a tour does not interfere with the care of [children with no immigration status] we require a minimum of two week notification at the convenience and availability of the facility, which has been policy since 2015.”

Murphy spokeswoman Laura Maloney said HHS informed the senators on Friday morning that they needed to give two weeks notice for a visit. That notice, she said, came two days after the senators were told their visit was approved.

Blumenthal and Murphy say they had a right, and responsibility as members of Congress, to visit the center and meet with the children.

“We are dismayed that HHS seems to be more concerned about stopping congressional oversight than the care of these children,” the senators said.  “How can this country know that these kids are being reunited with their parents if the whole process is kept secret from Congress and the public? This denial of access to a facility in our own state is outrageous, and we will keep doing everything we can to support Noank and to reunite these kids with their families.”

Noank Community Support Services is one of the dozens of non-profit entities around the nation that have contracts with HHS to house immigrant children.

Most of them have come to the country unaccompanied by parents or guardians. But one child at the center was separated from family at the border — one of the more than 2,500 separations resulting from President Donald Trump’s “zero tolerance” policy, which requires the detention of all undocumented immigrants on criminal charges.

Under federal law, minors cannot be held in detention for more than 20 days.

As a result, hundreds of children have been sent to facilities like the Noank Community Support Services, which tries to find a family member or other guardian for these kids.

This week, a federal judge in California ordered U.S. immigration authorities to reunite separated families on the border within 30 days, describing the Trump administration’s handling of the crisis as an attempt “to address a chaotic circumstance of the government’s own making.”

It’s unclear how the Trump administration will reunite the children with their parents. A bill in the U.S. House of Representatives that would have allowed children to be detained with their parents for long periods of time failed this week.

“President Trump’s zero tolerance policy has wreaked havoc on this country,” the senators said. “People across Connecticut are angry and heartbroken at the thousands of kids who were ripped from their parents and who now wait in limbo, not knowing whether they will see their family again.”