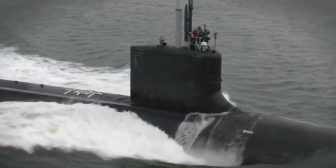 Washington – Rep. Joe Courtney on Friday said the Navy’s decision to bring the USS Indiana for maintenance at Electric Boat in Groton will save as many as 300 jobs at the shipyard.

“This decision will help sustain key jobs and skills in the Groton shipyard as we prepare for a surge in submarine construction work,” Courtney said. “It also ensures that one of our newest submarines, the USS Indiana, will not delay its first deployment.”

The USS Indiana is a Virginia-class submarine scheduled to be commissioned by the Navy — that is put into deployment — in September.

But before that can be done, the submarine must undergo what is called “post-shakedown” maintenance, which corrects defects found during a submarine’s “shakedown” cruise.

Submarine construction is expected to ramp up at Electric Boat as the Navy progresses with its new Columbia-class nuclear ballistic submarine program. But the shipyard has been eager for more maintenance work to keep skilled workers busy and alleviate workforce fluctuations.

The Navy did not have an immediate response to the plans to maintain the USS Indiana in Connecticut.