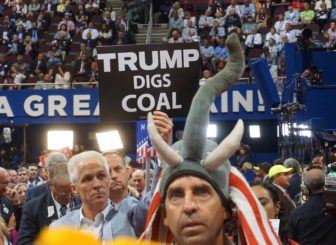 Trump’s support for coal were on display throughout the Republican National Convention in 2016.

By skipping a forum on climate change Monday night, the five Republican candidates for governor saved themselves from two unpalatable options: Defending the Trump administration’s love affair with coal to furious environmentalists, or riling the GOP base a month before the primary by publicly breaking with the president.

The GOP candidates opted for a safer choice: Accept an invitation to address Republicans in Southington at a forum that conflicted with the environmental event at Trinity College in Hartford. One candidate said there was little question there were more GOP primary voters in Southington on Monday night than in Hartford at Trinity.

“You have to make choices,” said Danbury Mayor Mark Boughton, the GOP convention-endorsed candidate. “Right now, you have to be in front of Republicans.”

Aside from the efficacy of focusing on Republican audiences before the mid-August primary, polling underscores the political risk for GOP candidates who publicly acknowledge that climate change is real and caused in part or total by the burning of carbon-based fuels to generate electricity, heat homes and propel cars.

“To be sure, there are differences between Democrats and Republicans on these issues,” said Mark Silk of the Trinity College Project on Public Values, a host of the forum. “Indeed, the partisan divide is growing, with 69 percent of Republicans now saying they think the threat of climate change is exaggerated as opposed to just four percent of Democrats — which may help explain why none of this year’s GOP gubernatorial candidates accepted our invitation.”

Last year, President Trump withdrew the U.S. from the Paris accord on climate change, and his new leader of the Environmental Protection Agency is a former coal industry lobbyist. Confounding free-market conservatives and environmental liberals, Trump also has moved to save unprofitable coal-burning power plants in the midwest that contribute to air pollution in Connecticut.

Then Lamont made partisan points on what used to be bipartisan, raising his voice and noting that all five Republican candidates last week gave Trump an A grade for his first 18 months as president.

Lamont was joined at the forum by Bridgeport Mayor Joseph P. Ganim, who is challenging Lamont for the Democratic nomination, and two other gubernatorial candidates, Libertarian Rod Hanscomb and petitioning candidate Oz Griebel, the former president of the MetroHartford Alliance.

The risk Republicans would have faced as supporters of a president who promotes coal became evident when Hanscomb was hissed for mildly observing that natural gas burns more cleanly than oil — irritating those who object to the burning of any fossil fuels — and booed when he referred to modern drilling technology without endorsing it. 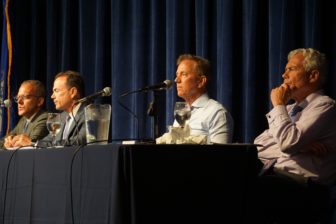 Lamont and Hanscomb said they support net metering, the practice of requiring utilities to pay customers who have solar panels that produce more electricity than the homeowners consume, power that then flows into the electric system. A recently passed law caps the amount of electricity the utilities have to buy from the owners of the solar panels.

“I think the cap on net metering is insane in this state,” Lamont said.

It was an applause line Monday night.

So was a reference by Hanscomb to the wonders of heat pumps.

Lamont and Ganim said they were opposed to making ratepayers contribute to the cost of a new pipeline that would increase the supply of natural gas in Connecticut, which proponents say could lead to cheaper electricity. They said the region is transitioning to renewable energy sources fast enough that the pipeline would be a bad investment.

Hanscomb and Griebel were more supportive of the pipeline, saying they supported renewables, but the move must make economic sense. Griebel called the transition a “balancing act.”

Lamont and Ganim said they would support banning the disposal of fracking waste in Connecticut. No waste from fracking, a process for economically extracting natural gas from shale and other rock formations, is currently dumped in Connecticut, which produces no natural gas.

On an audience question about whether Connecticut should allow Tesla to directly sell its electric cars to consumers, bypassing current law that requires automakers to sell through dealers, the candidates were mixed.

“I’m not a Tesla fan,” Ganim said of the expensive electric cars.

Hanscomb and Lamont said they would welcome Tesla, with Hanscomb observing that he supports free markets and Lamont saying the state needs to embrace new technologies and channels of distribution.

It was another applause line.