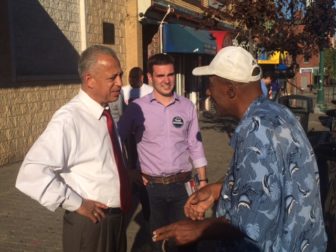 Pedro Segarra, left, during his last campaign in 2015.

The announcement was made with Malloy out of state attending the summer meeting of the National Governors’ Association in Santa Fe, N.M.

“The duties of a Family Support Magistrate and Workers’ Compensation Commissioner are critical toward providing the people of our state with the resources needed to seek justice on important life issues, and I thank each of these nominees for taking on this responsibility,” Malloy said in a statement.

Segarra, then the leader of the city council, automatically became mayor of Hartford in 2010 after Mayor Eddie A. Perez was convicted on corruption charges and resigned. (Perez later won an appeal, then pleaded guilty to receiving a bribe and attempted larceny.) Segarra was elected to a term in his own right in 2011, but lost a Democratic primary in 2015 to the governor’s former legal counsel, Luke Bronin.

Price, who now lives in Avon, is a partner in the law firm of Brown, Paindiris and Scott in Hartford.

The nominations will be among the last for the governor, who is not seeking re-election in November.