A bare-knuckle GOP debate about character, taxes — and reality 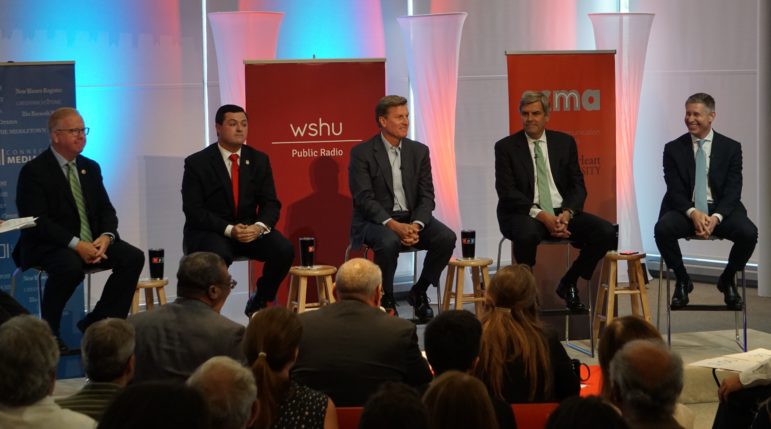 Fairfield — A question about eliminating the income tax sparked a protracted exchange of charges, countercharges, and insults Tuesday between the two Republican gubernatorial contenders with the least political experience and biggest television advertising budgets: businessmen David Stemerman of Greenwich and Bob Stefanowski of Madison.

Stemerman mocked Stefanowski for always talking about his career as a senior executive at GE, but seldom mentioning his last job in the corporate world — as chief executive of DFC Global, a company whose services include pay day loans. Stefanowski responded by dismissing Stemerman as a glorified stock trader guilty of “skimming profits” from pension funds.

With varying degrees of aggressiveness, the rest of the field taunted Stefanowski and Stemerman for their past lives as Democrats — Stemerman 15 years ago and Stefanowski as recently as last year, when he rejoined the GOP shortly before announcing his intention to the seek the party’s nomination for governor.

Herbst repeatedly asked Stefanowski to explain why he joined the Democratic Party shortly before the 2016 presidential election, then didn’t bother to vote in that election or 15 previous ones. Stefanowski has yet to answer what prompted his brief, recent membership of the Democratic Party, other than glibly ascribing it to “temporary insanity.”

Even Obsitnik, an Annapolis graduate who generally has refrained from rumbling with his rivals, took a shot at Stemerman and Stefanowski, albeit without naming them: “We need a Republican, who is a Republican, who can win this primary and turn around this ship.”

The 90-minute debate held at Sacred Heart University in partnership with the Hearst Connecticut Media newspaper chain and WSHU, a public-radio station, most likely portends a raucous final three weeks of campaigning on the ground and on television before Republicans go to the polls on Aug. 14 to choose their nominee for governor.

The other three are participants in the state’s voluntary Citizens’ Election Program, which limits their spending for the primary to $250,000 in contributions and $1.35 million public-financing grants. So far, Herbst has spent $803,080; Boughton, $774,023; and Obsitnik, the last to quality for public financing, just $168,882.

The jumping off point for the sharpest exchanges Tuesday came in response to a question about whether they would support eliminating Connecticut’s single largest tax, the levy on wages imposed in 1991 when the state’s economy and real-estate markets had cratered, and the state’s taxes on investment income and sales tax were insufficient to balance the budget.

Boughton and Stefanowski have promised to eliminate the income tax over eight or more years, never saying how a state already facing multi-billion-dollar deficits could do without the $9 billion Connecticut annually raises through its tax on wages, capital gains and other sources of income. It covers about 40 percent of the $20 billion annual budget.

Stemerman said Connecticut is buckling under the weight of unfunded pension liabilities and debts run up by politicians who catered to public-sector unions, promising Connecticut citizens it was affordable.

“We have two candidates on this stage who have made exactly the same kind of empty promises, Bob and Mark,” Stemerman said. “And for Mark, who is a career politician, for whom this is his third shot at running for this office, I’m not surprised he would go for broke.”

But Stemerman said Stefanowski, as a businessman who worked in finance, should be embarrassed to offer a tax plan that he calls a fantasy. Stefanowski returned the insult.

“After the way you handled yourself, turning this campaign into a smear campaign over the last week, you say I should be embarrassed? You should be embarrassed, Mr. Stemerman, and you should think before you speak,” Stefanowski said. Then turning to the audience, he added, “This guy has bought stocks his entire life. He’s never run anything. I’ve run big businesses.”

“That’s quite a slam. I own stocks, yes,” Stemerman said.

Then he turned to Stefanowski’s time in the payday lending industry.

“Your career, you have people believe you’re some kind of a rebuilder. You haven’t worked for GE for 10 years. In the introduction, DFC, we haven’t heard about DFC. DFC is a payday lender, which is the business you ran for the last three years. It was fined millions of dollars for charging interest rates of over 2,000 percent,” Stemerman said. “Is that what we need in our next leader? I don’t think so.”

“This could take all day,” he said

Stefanowski said he fired 20 of the top 30 executives at DFC, turning around a company that had defrauded low-income customers.

“That company did some bad things before I came in,” Stefanowski said. “I’m proud of what I did in that company.”

When it was Boughton’s turn to finally speak, he was asked if he could remember the original question.

Boughton replied that he could not, though he was entertained by the previous exchange.

The mayor of Danbury, a city of about 80,000 that regularly gets attention as a livable city with low unemployment and stable finances, defended his call for eliminating the income tax as a call to arms by Republicans.

“We as Republicans have got to be big and bold in our presentation to the public out there,” Boughton said. “I’m tired of losing elections and watching elections lost by people that have no experience in politics, don’t understand how to transcend and connect with people, and bring big ideas to the table and get folks to embrace them.”

Boughton lost the GOP nomination for governor in 2010 and 2014 to Tom Foley, a businessman who twice lost to Gov. Dannel P. Malloy.

Stefanowski, who sounded at times like an acolyte of Norman Vincent Peale, author of “The Power of Positive Thinking,” urged Republicans to ignore the naysayers.

“We need people who say it can be done,” he said.

Herbst said the facts do not support Stefanowski’s positive thinking.

“Let’s take a little stroll down memory lane. Lowell Weicker told us that the income tax would be temporary,” Herbst said.

Weicker never proposed the income tax as a temporary measure, though it is an urban myth that has taken root in recent years.

“John Rowland told us he would get rid of it. Jodi Rell and Dan Malloy told us they wouldn’t increase it. Guess what? None of that happened,” Herbst said. “So, in theory, we should all want to get rid of the income tax. But this goes to the core of  the differences in this campaign. We are three weeks away from picking the nominee of our party. And I haven’t heard anyone on this stage articulate a plan where two plus two equal four. No one has shown us how you’re going to close a $5 billion budget deficit.”