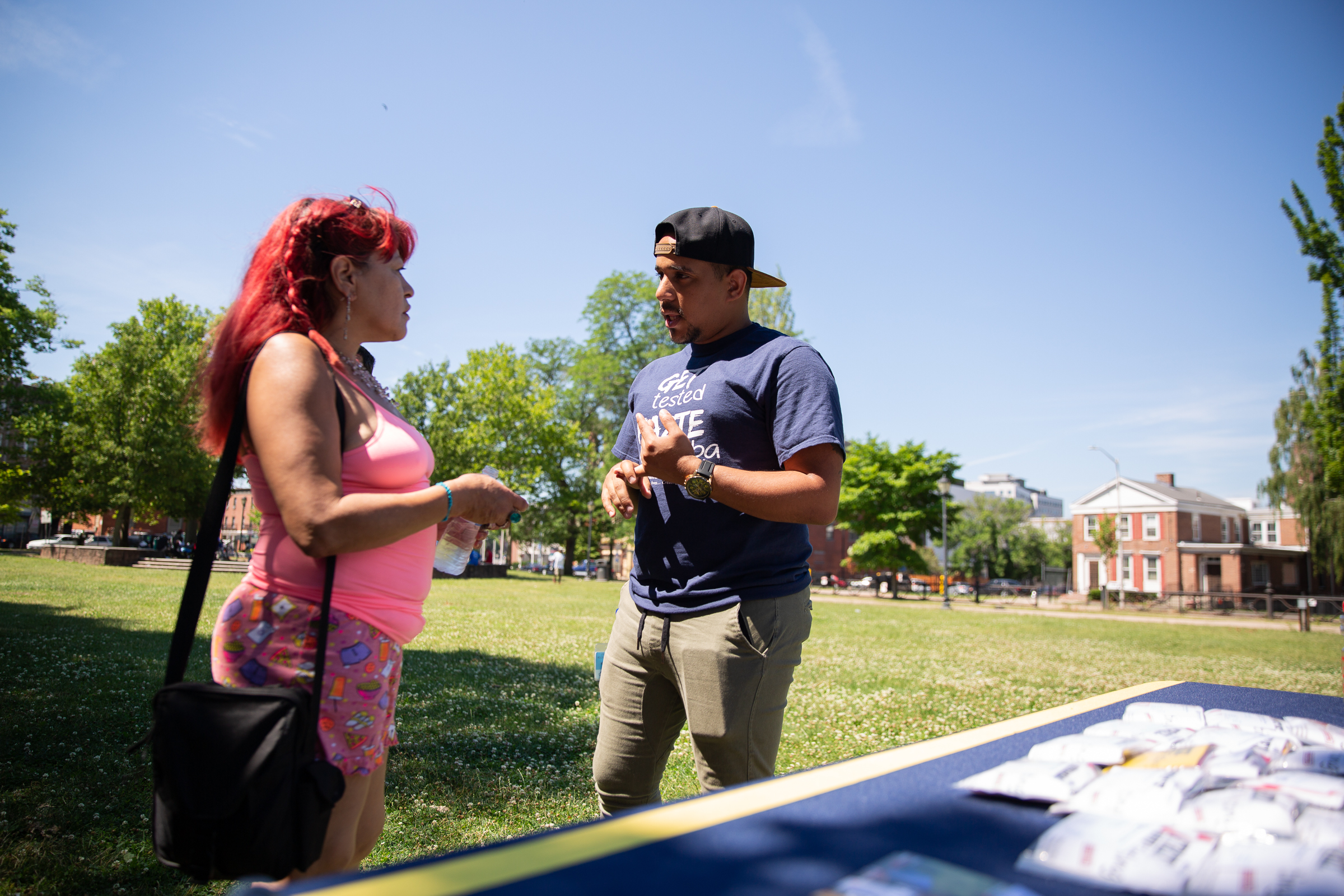 In fight against HIV, outreach workers take ‘PrEP’ to the streets

Tatiana Melendez waited in the shade during a New England heat wave, ready to make a move.

“I got all the information for you, all right,” Melendez, 46, said as she handed a baggie of info to a passerby. “This is very good for you. For everybody doing sex.”

At Hartford’s Barnard Park, a triangular patch of grass interlocked by streets south of downtown, free HIV screenings were underway in the back seat of a gray Nissan Rogue. Of course, Melendez and her crew would like to identify who is HIV-positive, to provide them services and access to medication.

But they also want to know who is HIV-negative, because there’s a drug for them, too.

PrEP, or pre-exposure prophylaxis, can lower the risk of getting HIV through sex by more than 90 percent, according to the Centers for Disease Control and Prevention. People who inject drugs can cut their risk of HIV infection by at least 70 percent with PrEP.

Yet six years after the federal government approved the daily blue pill for HIV prevention, Connecticut public health officials say they are still trying to put PrEP on people’s radars, and into the hands of those most vulnerable to contracting the virus.

The state Department of Public Health says more than 15,000 Connecticut residents could be at risk for HIV, which can cause AIDS without treatment.

In Hartford, PrEP has an ambassador in Melendez. Her official role is PrEP navigator, a job built on trust and savviness.

On stage, she goes by another name: Lady Tatiana. 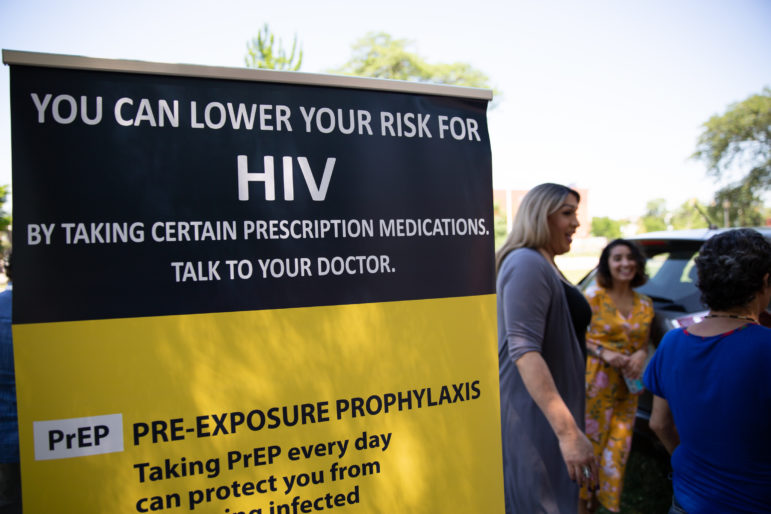 PrEP navigator Tatiana Melendez, standing tall next to the PrEP promotional poster, is doing HIV prevention outreach at Hartford’s Barnard Park on a recent Friday. Melendez, a.k.a. Lady Tatiana, began working for the Community Renewal Team in May and is trying to reach populations vulnerable to the virus. Photo by Ryan Caron King.

From Boston to Miami, and Puerto Rico to Hartford, Melendez has been on the scene for 25 years, performing at gay nightclubs and pride festivals as Lady Tatiana, the Latin Diva.

Every third Friday of the month, she hosts Latin Night at Chez Est, a Hartford LGTBQ club. She’s the headliner emblazoned on fliers: Tall, glammed up with fabulous hair. Now, more than ever, she is pushing PrEP. 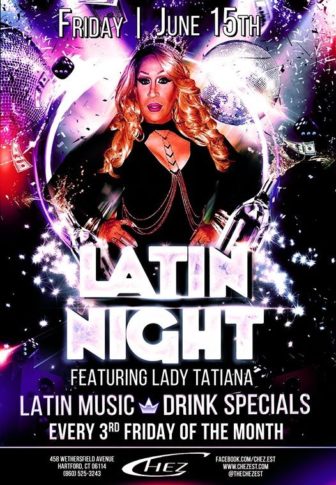 Melendez began her day job with the Community Renewal Team in May.

“I take the mic,” she said. “I talk about PrEP, about CRT, prevention. All that stuff.”

Jovany Rolon is a medical case manager for CRT, an agency in Hartford that gets government funding to be on the frontlines of HIV prevention. During a quiet moment at Barnard Park, Rolon acknowledged that getting people interested in PrEP has been difficult.

“We weren’t getting a lot of people in PrEP,” Rolon said. “But since Tatiana is here, we’ve gotten 17 people in the last month.”

The web of intricate factors that experts say has fueled the stark racial disparities in new HIV infections — social determinants of health such as poverty, racism, lack of access to healthcare and stigma — has also made it hard to get PrEP to people who might need it the most, according to outreach workers and state public health officials.

In Connecticut, black women are about 12 times more likely than white women to be living with HIV. Among men who have sex with men, who represent the majority of new HIV diagnoses, an analysis of 2016 data by the Connecticut Mirror found that blacks were about nine times as likely as whites to be diagnosed with the virus. For Latinos, the rate was more than four times that of white males.

Shelia Roane, 57, of Hartford was at the park as the CRT crew offered free HIV screenings. She said she worries about risk exposure from her “past life,” and said this was her first time hearing about PrEP.

“I’m too old to be out in the streets trying to do the stuff that girls do out here now,” Roane said. “Now I’m in my new life, trying to stay clean and sober.”

But Roane, who is black, said the subject of HIV isn’t discussed openly in her circles because the stigma is strong. “Too many judgmental people,” she said.

Melendez wants to make the topic more conversational. Born in New York and raised in Puerto Rico, Melendez is bilingual, transgender and has been on PrEP herself for five years — for her own protection and peace of mind, as she puts it.

Experience has taught her not to trust anyone she is intimate with, she said. Partners have told her they have a wife at home. And not all men want to use a condom.

“Maybe you’re doing right, and your partner, no,” Melendez said. Her bottom line is self-preservation: To protect yourself, consider PrEP.

It’s a message that her coworkers hope will resonate. Transgender women and younger men who have sex with men are part of Lady Tatiana’s core audience when she performs — groups that are also contracting HIV at disproportionately high rates.

The state has been leaving PrEP promotional materials in barbershops. And near Hartford’s Homestead Avenue, the placement of a PrEP promotional banner on a chain-link fence was strategically aimed at black residents in the North End, state public health workers said.

Pino, the public health commissioner, stressed that outreach should also focus on doctors.

Marianne Buchelli, one of the state Department of Public Health’s point people for HIV, said not enough primary health care providers are aware of PrEP — or feel comfortable broaching the topic with patients who might benefit from the preventative drug.

“It is touchy on both ends,” said Buchelli, a health program supervisor. “How often do people feel comfortable talking about sex with their doctor? Especially if you’re going to your doctor for another medical reason?”

Outreach workers also acknowledge a history of stigma for people already on the medication, and say PrEP users are at times associated with perceptions of promiscuity or unsafe behaviors.

Though the drug is effective at preventing HIV, Rolon and others stress that PrEP is not a golden ticket out of using condoms or clean needles to protect from other infections.

Controversy flowed after PrEP’s FDA-approved release under the pharmaceutical brand Truvada in 2012, with critics arguing that it would lead to less condom use — a concern borne out in one recent study.

Then about two years ago, Lebron noticed a shift.

“Honestly, we’ve seen a lot of interest in PrEP,” he said. Now an issue is preparing people for the regimen of periodic doctor’s visits and HIV tests — part of the PrEP process, along with taking the pill every day. Lebron said he has clients who are still using and have included PrEP in their daily drug routine.

As for getting to doctor’s appointments, “my clients aren’t always in the position to do that every few months,” Lebron said. “So it cuts them off from access.”

An HIV prevention crew at Community Renewal Team distributes baggies of information during an outing at Hartford’s Barnard Park this summer. The team was promoting PrEP, a preventative drug, and offering free, rapid HIV screenings in the backseat of a CRT employee’s Nissan Rogue.

A crucial part of Melendez’s job as a PrEP navigator is helping clients get around typical barriers to healthcare, such as cost and access. She arranges doctor’s visits for people interested in PrEP and figures out how to pay for the pricey medication through insurance or rebates.

But first, folks need to know that PrEP exists. The outreach squad at Community Renewal Team has hit up homeless shelters and senior homes — and has recently added five heterosexual Latin bars to the list because of connections that Melendez has in the nightclub scene, Rolon said.

Barnard Park, off a busy intersection in Hartford, was on the schedule for a Friday summer morning. Rolon’s Nissan, parked on a shady strip of grass, became the impromptu HIV testing center. Results are ready in 20 minutes after the prick of a finger. Melendez and her colleagues set up a PrEP poster and a table with freebies such as umbrellas, condoms and water bottles to spark interest.

Most of the passersby who lingered at the site said this was their first time hearing about PrEP.

Except for Michael Antonucci, 29, a resident at South Park Inn, a homeless shelter across the street from the park. “This isn’t like a free pass to go use and do high-risk activity, right? It’s just a preventative, prophylactic measure?” Antonucci asked.

“Exactly,” Rolon told him. “We want to make sure that people understand that PrEP only protects you from HIV. We also have syphilis, gonorrhea, chlamydia, Hep C, that PrEP doesn’t protect you from.”

The team fielded questions, stares, and personal history intakes for nearly three hours before packing up for lunch. Overall, they conducted about 19 HIV tests in the backseat of the Nissan, doubling their goal.

Those who tested HIV-negative and are interested in PrEP know to give Melendez a call.