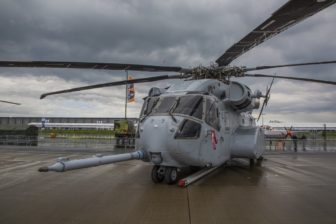 The defense bill increases military spending to $716 billion for 2019, raising the number of Sikorsky made helicopters the Pentagon can buy next year and boosting submarine construction at Electric Boat.

It also limits the purchase of F-35 fighter jets to 77 in the next fiscal year, the number requested by the White House but fewer than congressional appropriators hoped to have authorized, and holds back the transfer of jet fighters to Turkey.

The final National Defense Authorization Act, or NDAA, is a compromise between the House and Senate. It was released Tuesday.

The legislation, which is expected to be voted on in the U.S. House this week and the Senate next week, would also require the Pentagon to submit a report to lawmakers on the “overall strategic relationship with Turkey.”

The report would be due within 90 days of approval of the NDAA, during which the Lockheed Martin-made jets — whose engines are manufactured by Pratt & Whitney, — would be withheld from Turkey, which wants to purchase 100 Joint Strike Fighters.

Secretary of Defense James Mattis had asked lawmakers not to block the F-35 sale, warning that it could start a “supply chain disruption” that could push the price of the aircraft higher.

The NDAA also fences off 25 percent of funding for the next block of F-35s the Pentagon will buy until it provides a detailed cost estimate of that next group of jet fighters. It also requires the Defense Department to provide quarterly updates to Congress on the status and direction of the F-35 program.

The NDAA still needs companion legislation that actually appropriates the funding and there are some concerns lawmakers won’t approve a final defense appropriations bill in time to fund the 2019 fiscal year by Oct. 1.

Congressional appropriators recently quashed an attempt to secure $1 billion to fund two additional Virginia-class submarines, which would have increased the rate of construction from two to three submarines a year in 2022 and 2023.

The NDAA revived the effort to boost the number of those submarines by requiring the Pentagon to price out the option of purchasing 12 submarines, instead of the 10 requested by the White House, in the next block of subs. That issue is now under negotiation by Electric Boat and the Defense Department.

“This at least gives the country and the Pentagon the option of pricing out the additional subs,” said Rep. Joe Courtney, D-2nd District, a member of the House Armed Services Committee and one of the negotiators of the final bill.

Courtney said it’s likely the Pentagon will discover “that there are savings and efficiencies” in purchasing 12 instead of 10 Virginia-class submarines.

He also said “there is theoretically still time” for the next Congress to approve additional funding to build three subs a year in 2022 and 2023.

The bill also authorizes $3.2 billion to continue work on the new Columbia-class submarines, about $237 million more than the White House requested, and an additional $250 million in advanced procurement money to strengthen the submarine industrial base.

In addition, the legislation prohibits the U.S. government from using technology from Chinese telecommunications companies ZTE Corp or Huawei Technologies Co. Ltd. because of national security concerns, but rejected measures that would have reinstated sanctions on ZTE, abandoning an attempt to punish the company for illegally shipping U.S. products to Iran and North Korea.

The bill also bars the Pentagon from reducing U.S. troops in South Korea below 22,000 and extends a limitation on U.S.-Russian military cooperation.

The bill contains a strong congressional commitment to the North Atlantic Treaty Organization (NATO), and said “it is U.S. policy to pursue, in full coordination with allies, an integrated approach to strengthening the defense of allies and partners in Europe as part of a broader, long-term strategy backed by all elements of national power to deter and, if necessary, defeat Russian aggression.”