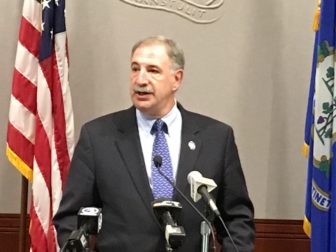 A new panel is exploring how Connecticut can use state assets — both physical properties and revenue streams — to mitigate pension costs expected to surge dramatically over the next 15 years.

Rep. Jonathan Steinberg, D-Westport, chairman of the Pension Sustainability Commission, made clear Wednesday at the group’s introductory meeting that this would not entail proposals to lease or sell state parks or other assets that are amenities or otherwise receive regular use from the general public.

But it could mean assigning other assets — such as annual proceeds from the Connecticut lottery, or unused state land or buildings — to cash-starved pension funds.

By selling, leasing, transferring or even borrowing against these assets, Connecticut could — through a complicated process — slow the growth of pension costs that already consume about 15 percent of the General Fund.

The 10-member pension panel must report its recommendations to the 2019 General Assembly, which convenes on Jan. 9.

Connecticut’s required contributions to pensions for state employees and teachers, and their related costs, are projected to grow from about $2.9 billion in 2018 to about $5 billion by 2026. And that’s assuming the state’s return on pension fund investments meets aggressive assumptions that many officials say are high.

Dedicating assets to the pension fund “is not going to solve the problem in and of itself, but we need new ideas,” said Steinberg.

Why? Because the stakes are too high and traditional solutions alone won’t solve the problem, he said.

“The burgeoning liabilities are quickly crowding out spending,” Steineberg said. Legislators from both parties as well as advocates for various special interests have complained in recent years that surging retirement benefit costs are draining resources away from social services, health care, higher education, transportation and municipal aid.

“We can’t cut spending enough” to offset the pension costs,” he said. “Raising taxes is probably not on the table and it’s unrealistic to expect to grow our way out of the problem in the short term.”

So how could the state better use its assets to take some of the steam out of surging pension costs?

One example, raised earlier this year by another state study panel — the Commission on Fiscal Stability and Economic Growth — involves the quasi-public Connecticut Lottery Corporation, which sent between $330 million and $345 million into the state’s coffers in each of the past three fiscal years.

The teachers’ pension has enough assets to cover just 56 percent of its long-term obligations. In other words, it has an unfunded liability of about 44 percent.

But what if Connecticut were to assign that lottery revenue stream — and any projected growth — to the teachers’ pension for two decades or longer, and assign it a cumulative value of $6 billion or more?

Even though the lottery still wouldn’t raise all of the money until 20 years has passed, the teachers’ pension could count the full $6 billion as an asset now. This would reduce the unfunded liability, which is a key factor in setting the required annual pension payments state government must make.

New Jersey assigned its lottery proceeds to its teachers’ pension fund in 2017.

Other properties could be “monetized,” Steinberg said, possibly by selling or leasing them and assigning those assets to a pension fund as well. 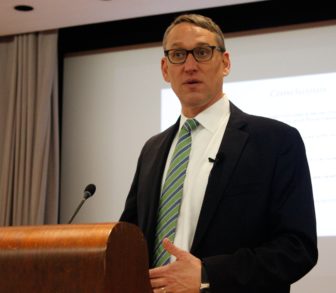 “There are no quick fixes,’ Barnes said, outlining pension funding problems that date back more than seven decades.

Through three new agreements with state employee unions — one in 2011 and two in 2017 — Connecticut has dramatically scaled back retirement benefits for new state workers, Barnes said.

It also has modified its required contributions into the state employees’ pension, smoothing spiking costs somewhat.

Annual contributions into the state employees fund — once projected to exceed $6 billion by the early 2030s according to one analysis — still will grow from about $1.4 billion last fiscal year to nearly $2.3 billion by 2022.

In exchange for that relief, though, Connecticut will have to make up those deferred payments — plus an estimate of the investment returns those payments could have earned — after 2032.

Malloy administration projections showed $14 billion to $21 billion in costs would be shifted until after 2032, and the state wouldn’t catch up on all deferred payments until 2047.

The teachers’ pension currently is headed for a similar spike, with projections saying the annual cost could rise from about $1.4 billion now to anywhere between $3.3 billion and $6.2 billion by the early 2030s.

“We are in a big challenge with the teachers’ retirement” system, Barnes said. “That is going to be a big piece of (overall state) budget growth every year.”

Connecticut doesn’t have the flexibility right now to restructure and smooth out payments into that fund as it did with the state employees’ pension. When the state borrowed $2 billion in 2008 to shore up the teachers’ pension, it pledged in the bond covenant — the contract between the state and its investors — not to tamper with the contribution schedule until the bonds are paid off in 2033.

Barnes and state Treasurer Denise L. Nappier’s office say Connecticut could pay off those bonds early, by 2025 or 2026, and then restructure payments.

Utilizing state assets could be a way to mitigate the rise in teacher pension contributions between now and the mid-2020s, Barnes added.