For Joe Ganim, the first question is the hardest at Democratic debate 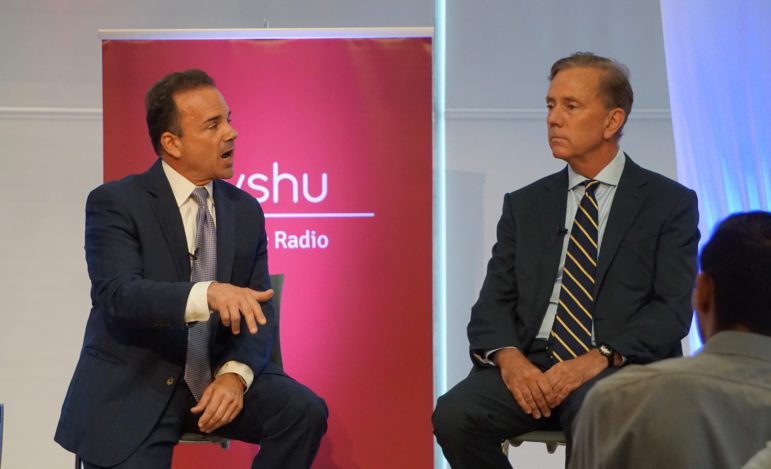 Fairfield — Try as he might, Joseph P. Ganim could not provoke Ned Lamont into an argument Thursday, failing to draw the Democratic gubernatorial frontrunner into any exchange capable of altering the dynamics of a race that never stray far from one question: Can Ganim, a convicted extortionist, be a credible statewide candidate?

A debate at Sacred Heart University opened with an invitation for the Bridgeport mayor to explain how his systematic extortion of city contractors for years, a scheme that ended only with his conviction on 16 felony counts and nine-year prison sentence, could be seen as anything but evidence of his essential character.

“Sure,” Ganim said, giving himself a moment to absorb the question. “And mistake is not a terminology that I cling to. It’s that I made serious errors in judgment and broke the law. I paid a terrible price for it, learned, I hope, more than most would through that experience, lessons about the impacts of mistakes, but not small ones.”

That was as close as Ganim came to explaining who he was from 1991 to 2003, his first stint in city hall, or how he changed while serving seven years of a nine-year sentence. Instead, he quickly pivoted, turning the question into an opportunity to talk about the need for society to provide second chances, “to consider the good in a person.”

It is a message that helped return him to office in 2015, when he ran again for mayor on a campaign of nostalgia and second chances.

The statewide Democratic Party was less welcoming in May, refusing at its state convention to give him the 15 percent of the delegate vote necessary to qualify for the primary, a rebuke that forced the mayor of Connecticut’s largest city to petition for a place on the August ballot. Lamont, a wealthy Greenwich businessman who ran for U.S. Senate in 2006 and governor in 2010, was overwhelmingly endorsed.

Since then, Lamont has built a campaign around winning in November against the winner of a five-way GOP primary, a contest in which every candidate has pledged support of President Trump, an intention to cut taxes, and a willingness to attack the influence of public-sector unions at the State Capitol.

On Thursday, at a debate sponsored by the newspaper chain, Hearst Connecticut Media, the public-radio station, WSHU and the university, Lamont arrived with a game plan centered around hewing close to a message that he is an agent of change, an advocate for the middle class, and someone not rattled by political attacks.

Throughout most of the one-hour debate, Ganim sat on the edge of his stool, one foot flat on the floor, his body turned to Lamont, as though ready to pounce, if the opportunity arose. Lamont did his best not to provide him with one.

Lamont said he agreed that society should afford people second chances, and the voters of Bridgeport have generously given one to Ganim, who began looking at a run for governor just 18 months after his election as mayor. Lamont said Ganim should return the favor by serving his four year term as mayor.

Ganim and Lamont each said they would support an open competition for the rights to open a casino in Bridgeport, where the owner of a waterfront parcel has struck a development deal with MGM Resorts International, should the state authorize casino expansion.

“I’m not going to stand in the way of private enterprise that wants to invest six or seven or eight hundred million dollars in Bridgeport or elsewhere. I support the idea of an open process,” Lamont said. He added that Connecticut’s two federally recognized tribes have been good partners to the state given the jobs and revenue generated at their two casinos.

Ganim said he heard vacillation in that answer.

“The problem with Ned’s answer is it has a level of equivocation in it,” Ganim said, calling it less than a full-throated endorsement.

“I don’t know, Joe. We have enough we disagree on. This is something we more or less agree on,” Lamont said. “Let’s shake hands and move forward on it. I don’t hear any equivocation. I was pretty clear.”

A question was relayed from a public-radio listener about what the two Democrats like about the record of Gov. Dannel P. Malloy, who seems destined to leave office next January as one of the least popular governors in the U.S. Both candidates sought to be gracious, while keeping a safe distance from the incumbent.

Ganim praised Malloy on the sweeping gun control law he successfully pushed after the Sandy Hook School shooting and his willingness to defy the NRA, a compliment certain to please the Democratic base. But he quickly said he has a more collaborative style than Malloy and noted the governor opposed his return to politics.

Lamont began by recalling that he challenged Malloy for the Democratic nomination in 2010, a credential he quickly presents whenever the topic of Malloy is raised. Lamont said he warned voters in 2010 that Connecticut needed structural changes to break the cycle of budget crises.

“We’re still in that mess,” he said. “I would have done things very differently.”

Sounding a theme certain to be heard this fall, Lamont then sharply said, “Don’t sit around blaming previous governors. I don’t know how that impacts anybody.”

Lamont said Malloy deserves praise for insisting the state made its actuarially required contributions to the state’s underfunded pension funds.

“If his predecessors had done that, we would not be in the mess we are today,” he said.

The two Democrats, who each sought the endorsement of the Connecticut AFL-CIO, (which went to Lamont by acclamation), carefully established a little distance from labor on the issue of seeking concessions. The aggressive stance of the GOP field, where candidates have vied to be the toughest on undoing pension commitments and curbing collective bargaining, gives the Democrats room to be labor’s friend, while suggesting sacrifices will be necessary.

Lamont said he would seek changes in contracts through negotiation and collaboration.

Both candidates kept their distance from Malloy’s push to spend $10 million on a study of how the state could implement electronic tolls in accordance with federal law. Both are open to tolls, though Lamont has insisted he would only charge trucks, an idea that Ganim said could not pass legal muster.

Without fully fleshing out the criticism, Ganim suggested something was amiss in how Lamont handled cutbacks when running his cable company, Lamont Digital. He repeated his challenge for Lamont to release a financial disclosure statement before the Aug. 14 primary. But those were blows that never quite landed.

Ganim closed with a reference to his criminal past.

“Look, I’m far from perfect,” Ganim said. Then he looked at Kaitlyn Krasselt, the Hearst reporter who asked the first question about his character. She had wryly suggested she’d start with something easy. “It’s hard question to answer,” Ganim said. “But it’s real, and you’re entitled to ask it, and I thank you for asking it.”