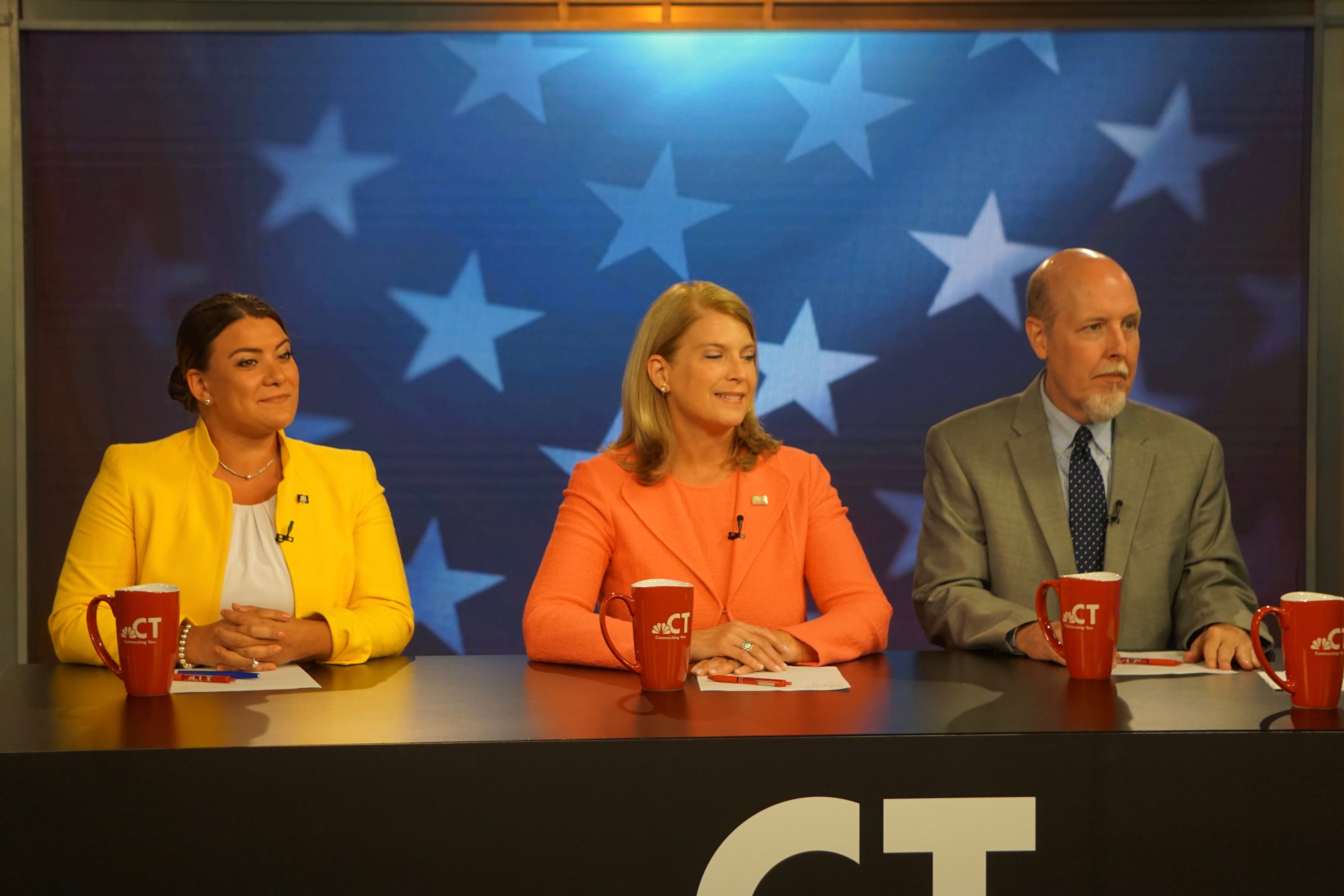 West Hartford — The three-way Republican primary for lieutenant governor is as much an awkward audition as a campaign: Joe Markley, Jayme Stevenson and Erin Stewart are vying to show they are best suited to help a yet-to-be cast running mate return the GOP to power, without knowing which of five gubernatorial contenders will get the role.

Stevenson, who is in her eighth year as first selectman of Darien, a wealthy enclave of 21,000 wedged between Stamford and Norwalk, arrived at the studios of NBC Connecticut on Monday night with a clear objective — making the argument that the GOP needs a Number Two who would be most electable in a November election, not most popular in an August primary.

And that, Stevenson said in the sharpest of the three closing arguments delivered at the end of a one-hour debate, rules out Markley, perhaps the most conservative member of the state Senate, and Stewart, the young three-term mayor of the financially struggling city of New Britain.

“Bar none, I have the most demonstrated experience and electability to help the Republican ticket win in November,” Stevenson said. “I have great respect for my colleagues here on the stage. Anybody that steps into the public service arena really deserves a lot of credit.”

But Stevenson called Markley’s voting record “problematic,” and dismissed Stewart as an unexceptional mayor too friendly with labor to support a conservative governor in changing collective bargaining laws. It was a fleeting moment of criticism in an otherwise amiable one-hour debate live-streamed on the web, but not broadcast on television.

In both parties, candidates for lieutenant governor are asking voters in Aug. 14 primaries to do what once was the exclusive job of party insiders: Construct a balanced and complementary ticket capable of exciting each party’s base, while offering the broadest possible appeal in the general election. Susan Bysiewicz and Eva Bermudez Zimmerman, who are seeking the Democratic nomination, will debate Thursday night.

Ned Lamont, the endorsed Democratic candidate for governor heavily favored to win a two-way primary against Bridgeport Mayor Joseph P. Ganim, has named Bysiewicz as his choice. Mark Boughton, the endorsed Republican, and his four rivals have made no similar alliances with Markely, Stevenson or Stewart.

Markley is a state senator from Southington who stands alone in opposition to bills ranging from inducements to keep Sikorsky Aircraft in Connecticut to a measure aimed at  curbing sexual misconduct on college campuses. He easily won the endorsement of the Republican state convention in May, a reflection both of his early start as a candidate and the appeal an across-the-board conservative enjoys to the Republican base.

“I have cast some difficult votes, and I am proud of casting difficult votes,” Markley said. “And I’m proud also of my ability to explain why I have done that. And I have, I think, demonstrated electoral ability in a difficult district, a swing district, back in my home area.”

Markley said popularity with the GOP base is an asset, not a liabilty.

“I think it’s critical that the base of the Republican Party knows that they have somebody on the ticket that they can depend on, and that that base is not simply supporting us, but activated,” Markley said. “We need an army to win this election, and I believe I can attract that army, because the people that are motivated know they can trust me when I am in office.”

Stevenson mentioned no votes during the debate, but said after the forum that she was especially troubled by his casting the only vote in 2016 against a bill requiring college students about to begin a sexual relationship to obtain affirmative consent from their partner. Markley called it a governmental overreach.

“I think the yes-means-yes vote, it is very problematic for him in the fall,” Stevenson said.

At the convention, Stewart angered some Republicans by casting her candidacy in generational  terms. Stewart is 31, and she has claimed that her representation of a racially diverse, Democratic city would give the GOP a fresh look.

Stewart was a candidate for governor until the eve of the convention, when she quit the crowded race for governor to run for lieutenant, crowding Stevenson for the women’s vote in what has been dubbed the year of the woman in U.S. politics. Stewart took offense at the criticism by Stevenson, who governs a community where the median home value is $1.2 million and the median household income in 2016 was $208,000.

“I don’t believe in tearing others down to build myself up,” Stewart said “But I am sitting here today, because I worked hard to be here. I worked very hard as the mayor of the city of New Britain, one of Connecticut’s urban cities, to be here tonight. I’ve earned it, not because I’m a woman, not because I’m young, but because of my record of success, as many of us know about it.”

She was prepared for one question that never came: How would she work with any of the GOP gubernatorial candidates who have criticized a Hartford to New Britain busway as “the busway to nowhere?”

Stewart said she agreed that the busway was too expensive, but argued that it is an important part of a necessary mass-transit network for New Britain.