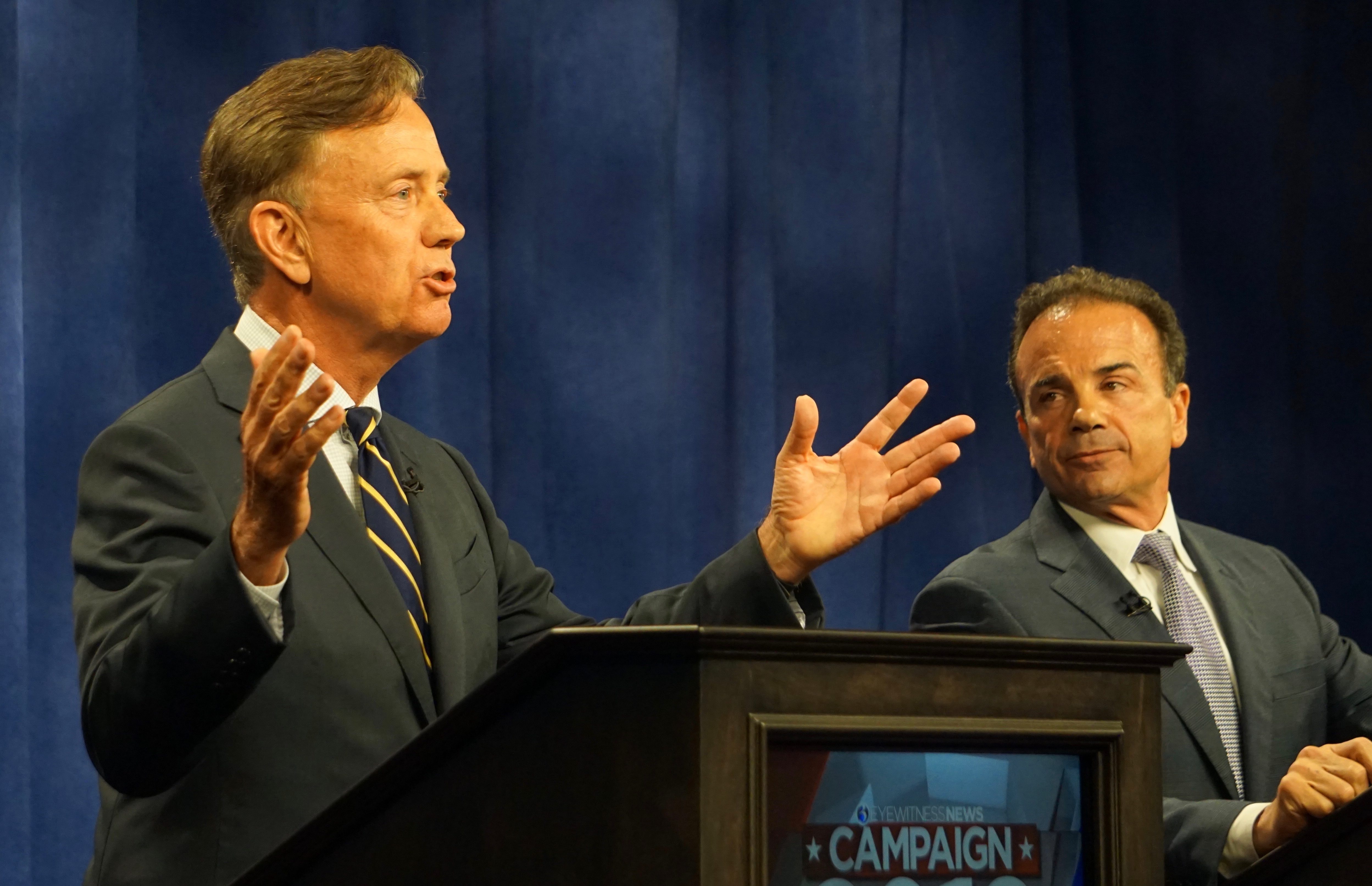 Bridgeport Mayor Joseph P. Ganim was more aggressive Tuesday in questioning why Ned Lamont might be reluctant to support a convicted extortionist for governor than Lamont was in challenging Ganim’s fitness to lead Connecticut after seven years in prison for using his office to routinely shake down city contractors for bribes.

In the final Democratic gubernatorial debate before the primary on Aug. 14, Ganim repeatedly complained that Lamont, a Greenwich businessman who won the overwhelming endorsement of the Democratic state convention, has refused to promise to support Ganim should Democrats choose the felon to lead their ticket.

Mindful that no Democrat can win the general election without a decent turnout in Bridgeport, Lamont has labored not to give insult to the city’s voters on the topic of their mayor’s character and electability. On Tuesday, he again declined to definitively answer hypothetical questions about supporting Ganim.

But the two Democrats were pressed near the conclusion of the one-hour debate broadcast live from the Rocky Hill studio of WFSB, Channel 3, to say if they would support their primary opponent in the fall.

Ganim pounced. He cast Lamont’s answer as a rejection of the party, not him. It was a small victory for Ganim, who has tried throughout the campaign to use Lamont’s wealth against him, suggesting that the former owner of a digital media company was too distant from workaday Democrats to understand their needs.

“Based on that answer, it’s a very uncomfortable feeling here, that he would diss the entire Democratic Party and put us in the hands potentially of a Connecticut Trump, possibly support Republicans,” Ganim said.

Lamont said he would not vote for a Republican for governor, but he wanted someone “with integrity.”

Ganim was asked no questions about his conviction in 2003 on 16 felony counts, or his sworn testimony at trial that he was innocent. The trial judge concluded he lied, and his denials were a factor the Connecticut Supreme Court cited in blocking his re-admission to the bar. Bridgeport voters were more forgiving, returning him to office in 2015.

The first question was which of the candidates was most like Gov. Dannel P. Malloy. With the one-minute allowed for answers, Ganim posed and answered his own questions about the conspiracy he led over more than five years before the FBI arrested him.

Lamont passed on the opportunity to disagree.

The one advantage Ganim has enjoyed in his unlikely bid to become governor has been reluctance of Democrats to confront him over his criminal past out of deference to the city’s Democratic chair, Mario Testa, its base of Democratic activists and the large delegation it sent to the Democratic state convention. Bridgeport is the state’s largest city and its second-largest source of Democratic votes after New Haven.

Republicans, of course, would have no such reluctance.

As the Democratic field shrunk and Lamont became the consensus choice for governor at the convention in May, the hope was that Ganim would join the other  former candidates in endorsing him. Ganim refused, and the convention pointedly declined to give him the 15-percent minimum delegate vote to qualify for a primary.  Ganim then petitioned his way onto the ballot.

After the debate, Lamont was asked why he did not more directly answer the question about supporting Ganim.

“Well, I think I’d like to have support from Bridgeport this fall. I don’t mean to be disrespectful to anybody, but I think people know where my heart is on this thing,” Lamont told CT Mirror. “I’m going to win. I’m going to win on Aug. 14. It makes the consequences all the more important. I really worry about the future of the Democrats if I don’t win this Aug. 14 primary. It would be a real black mark.”

The candidates were asked a series of rapid-fire questions at the conclusion of the debate.

Would they welcome Bill Clinton to campaign for them in the post #MeToo world?

“I don’t think so,” Lamont said. “I want this campaign to be about looking forward.”

Ron Chernow’s “Grant” for Lamont. Nothing for Ganim, who said he reads the newspapers, but hasn’t read a book from start to finish in three years.

Would they hire a convicted felon?

“It depends on the job, but everybody deserves a second chance,” Lamont said. “It does depend on the job.”

Ganim smiled and jerked his thumb towards Lamont.

“It sounds like everybody, but Joe Ganim in his answer,” Ganim said. “But yes, I would.”