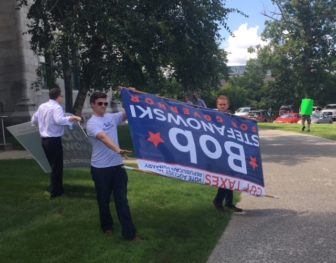 Stefanowski, one of the five Republican candidates for governor, signed a term-limits pledge Thursday outside the State Capitol, not far from where some mischievous college students recently crashed Timothy Herbst’s signing of a no-tax pledge. Herbst suspected the Stefanowski campaign.

On Thursday, it apparently was payback time. Three college-age men showed up with signs mocking his nine months as a registered Democrat (from October 2016 through July 2017) and his failure to vote for Donald Trump or anyone else in 2016.

Stefanowski finished his prepared remarks as his staff tried to block the sign wavers, doing the same dance Herbst’s supporters employed when their candidate was interrupted. Then Stefanowski departed without taking questions from the small knot of reporters.

In addition to signing the term-limits pledge, Stefanowski proposed a state constitutional amendment barring any tax increases without a two-thirds super majority of the General Assembly, saying it would have saved Connecticut from an income tax had it been in place in 1991. The foundation of his campaign is a promise to phase out the income tax over eight years.

CT Mirror did manage one question as Stefanowski quick-walked to a car with his campaign manager: Does any state require a two-thirds vote to raise taxes?

Patrick Trueman, the campaign manager, called later to say several states had such restrictions, including Nevada, Missouri, Arizona and Louisiana. He said the Stefanowski campaign is all about fewer taxes. According to the Center on Budget and Policy Priorities, there actually are 16 states that require super majorities to raise at least some taxes, though the center concludes it has not been a game changer.

“States with strict supermajority requirements levy taxes at a nearly identical level as other states, on average,” the center says. “In both groups of states, state and local taxes have remained flat as a share of personal income for three decades.”

Trueman said Stefanowski did not leave to avoid the protesters. He never intended to answer questions from reporters about his proposal or anything else, not exactly standard practice for what was billed as a “press conference.”

Meanwhile Jon Conradi, a senior adviser to Herbst, said he had no idea who sent the sign wavers.

“These were probably just people following the campaign and were concerned about a former Democrat and Democratic contributor hijacking the nomination,” Conradi said.

Yes, it might’ve happened the way.

The primary is Tuesday.