Rallygoers at the last leg of the March For Our Lives summer bus tour in Newtown on Sunday.

Newtown — Activist students from Parkland, Florida made this Connecticut town the symbolic last stop of a nationwide bus tour on Sunday during their full-steam quest to galvanize young adults to vote for candidates who support stricter gun laws.

Survivors from the Valentine’s Day mass shooting at Marjory Stoneman Douglas High School took the stage with students from Newtown and other states Sunday to finish the March For Our Lives summer bus tour that spanned 50 cities.

Students of all ages stressed the need for tighter gun control, calling on youth to ensure that politicians who support the National Rifle Association and lax gun laws lose in November. 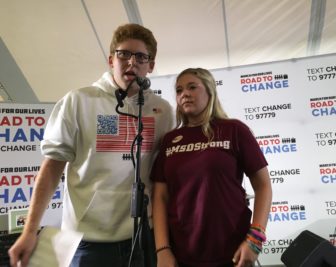 Matt Deitsch and Jaclyn Corin speak at the Sunday rally in Newtown.

Jaclyn Corin, who survived the Florida shooting that left 17 dead, told the crowd that students in Parkland and Newtown never expected that level of violence to touch their communities, but said both tragedies forced the nation to come together.

“There are too many empty beds in this nation,” Corin said. “Bullets do not discriminate against your race, religion, zip code, age or circumstance—taking new victims every day [while] we as a nation reside on the sideline.”

The rally took place about two miles from Sandy Hook Elementary School, where a gunman killed 20 first-graders and six educators in 2012. Sandy Hook Promise, an anti-gun violence group formed by parents of children killed in the massacre, hosted the event that organizers said drew roughly 2,000 people.

Also among the crowd were Democratic political candidates attempting to garner further support before primary races on Tuesday.

Youth activists took turns addressing the crowd through speeches, songs, and poems intended to inspire people to get involved in the gun control movement.

At one point, people in the crowd were asked to raise their right hands and promise they would vote to change gun violence in the U.S. 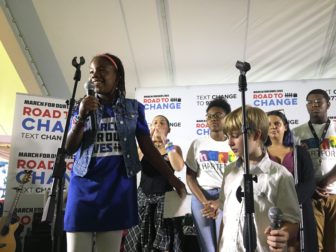 Later, rallygoers roared when Yolanda Renee King, Martin Luther King Jr.’s nine-year-old granddaughter, led them in a chant that included the words, “We are going to be a great generation.”

Natalie Barden, who was 10 when her younger brother Daniel died in the Sandy Hook massacre, said that, for a long time, it was too difficult for her to participate in the conversation about gun control.

“Every voice makes the chorus of common sense louder,” Barden said. “We are all here today because no one should have to feel the life-shattering pain of losing a loved one to a gun.”

Barden was then joined on the stage by her father, Mark Barden, for an emotional performance of the country hit  “Humble and Kind” in memory of her brother.

The rally was held on the grounds of the former state psychiatric hospital, Fairfield Hills. It included booths for several anti-gun violence groups and one solely for voter registration.

Matt Deitsch, a 2016 graduate of the Parkland high school, said the tour was inspired by the labor movements that organized vulnerable young people to leadership positions and the 1961 Freedom Rides.

“We need to vote congressional members out of office who take money from the NRA,” Murray said. “If young people show up at the polls at midterms and every other election they can control what happens on Capitol Hill.” 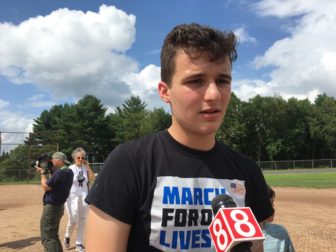 Cameron Kasky speaks to press during the Sunday rally in Newtown.

Parkland activist Cameron Kasky said getting youth to register to vote is easy.

“Getting them to actually bother to vote is hard, and I think the young people in this country had a rude awakening this year and might just be showing up in some record numbers,” Kasky said.