Sports betting in 2018? The odds are long 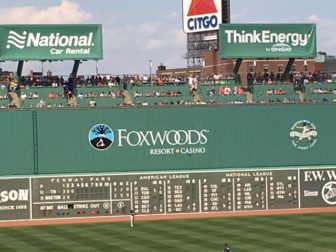 Foxwoods advertises at Fenway. It also would like to book bets on what happens there.

Legalizing sports betting in Connecticut this year became a long shot Wednesday after Gov. Dannel P. Malloy said he has suspended talks with the state’s two federally recognized tribes over a new gambling compact — a recognition that the General Assembly is unlikely to return in special session for a debate on sports wagering.

“Three weeks ago, we were within days of reaching an agreement,” Malloy said of the tribes. “I don’t think circumstances have changed dramatically, except that the Republicans in the legislature have indicated they don’t want come to come into session on this topic. Unless that changes or unless the Democrats say they want to come in, then there wouldn’t be a session. There would be no reason to continue negotiations.”

The next governor and new General Assembly take office on Jan. 9.

A crash course on luring sports betting from the shadows

Will Sports Betting Step From Shadows in Connecticut?

Senate President Pro Tem Martin M. Looney, D-New Haven, said Democrats have not objected to a special session, but there is wariness among legislators in both parties about trying to quickly establish the conditions under which sports betting would be allowed in Connecticut, where the presence of two tribal casinos complicate any gambling expansion.

“I think it has bipartisan support, as well as bipartisan opposition,” said Rep. Vincent J. Candelora, R-North Branford, a deputy House minority leader. “This is not a partisan issue.”

The Mashantucket Pequot and Mohegan tribal nations have the right under federal law to offer any form of gambling that is otherwise legal in Connecticut. A further complication is the tribes have exclusive rights to all forms of casino gambling under deals struck 25 years ago. In return they pay the state 25 percent of their gross slots revenue.

One unresolved issue: Is sports betting, long offered at Las Vegas casinos, a form of casino gambling? If so, the state offering it would abrogate the slots deal that produces more than $250 million annually for the state, though the revenue is projected to shrink after the opening this month of a casino in Springfield and one outside Boston in 2019.

Sports betting seemed to be on the fast track in May after a U.S. Supreme Court decision struck down Nevada’s monopoly and gave every state the right to allow sports betting. Malloy quickly obtained an informal go-ahead from legislative leaders to open negotiations with the tribes.

Looney said he personally favored moving as quickly as possible, so the state could begin collecting revenue, but he added that any new compact would have to be ratified by the General Assembly, then submitted to the federal Bureau of Indian Affairs.

“So, there are a number of hurdles to jump over,” Looney said.

Candelora said he preferred to see an exhaustive review of the issue that is only possible during a regular legislative session. When the state authorized the Connecticut Lottery to offer keno, it agreed to share 25 percent of the revenue with the tribes to resolve the issue of whether they had exclusive rights to the game.

Candelora said he would like to see the state be less generous with sports betting.

No one disputes that the tribes are permitted under the federal Indian Regulatory Gaming Act to open sports books at their casinos, Foxwoods Resort Casino and Mohegan Sun, if Connecticut legalizes sports betting. What is unclear, however, is whether the tribes have a claim on a share of the state’s sports action or even exclusive rights to sports wagering under their gambling agreements with the state.

Sportech, which was hoping to add sports betting to its off-track betting facilities in Connecticut, expressed disappointment in a statement issued Wednesday night:

“We remain hopeful that legislation will pass in the new year, especially as we see surrounding states adopting their own legislation, and we will continue to prepare so that when the legislation is passed, we will have a high-quality, secure sports betting experience to offer.”