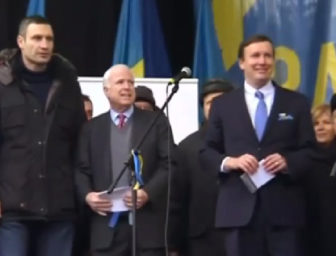 The two Connecticut senators are among a majority of Republican and Democrats mourning McCain’s death since the Arizona senator died this weekend.

And while senators always mark the passing of a colleague, even if the deceased is a member of the opposite party, Democrats in Connecticut and around the country are mourning McCain for specific reasons, analysts say.

One is that McCain has helped many of his Democratic colleagues pass key legislation — and blocked some significant GOP initiatives that Democrats hated, like last year’s attempt to overturn most of the Affordable Care Act. McCain also broke with his party by criticizing President Donald Trump, joining Democrats in a stinging denunciation of Trump’s summit with Russian President Vladi­mir Putin in Helsinki last month.

The second reason Democrats like McCain so much, analysts say, is more subtle, however.

By praising McCain, Democrats are showing they care more for the popular senator than the president, who had an antagonistic relationship with McCain. Trump shocked many when he said at one of his campaign rallies that McCain was “…not a war hero. He’s a war hero because he was captured. I like people that weren’t captured.” McCain was shot down and captured in 1967 while fighting in the Vietnam War and then held as a prisoner of war until 1973.

Trump also attacked the ailing McCain often, and as recently as last week, for his vote against the ACA repeal.

Kyle Kondik of the University of Virginia’s Center for Politics said Democrat’s praise for McCain is aimed in part to remind voters of the president’s views about McCain and “make a greater point about the president,” namely that Trump does not hold to the same standards of political discourse as McCain, who famously defended then-opponent Barack Obama during a town hall meeting in 2008 against accusations that Obama was an “Arab.”

“Any Republican who is critical of Trump, Democrats feel positively about,” Kondik added. “But there would have been a positive response no matter what.”

Shortly after McCain’s death at 81 from an aggressive form of brain cancer was announced late Saturday afternoon, Blumenthal said in a statement, “our country lost an American hero and true public servant tonight.”

Gov. Dannel Malloy, who never served with McCain but met him on a several occasions, said,  “John McCain is a hero who put his life on the line to defend our nation during a turbulent time of war, experiencing torture and suffering that left him with lifelong physical wounds, and yet on his return home he continued to live his life as humble and unassuming as even the most modest among us.”

Murphy tweeted out a photo of a young McCain in uniform.

“How lucky us chosen few were to count John McCain as a friend or a colleague or a mentor,” Murphy tweeted. “How lucky America was to have him as our inspiration, our rock. A masterclass in life, leadership and patriotism. I miss him already”

University of Connecticut political science professor Ron Schurin agreed that Democrats are seizing the “opportunity to rebuke Trump,” but observed that McCain probably would draw considerable praise even if the president hadn’t feuded with the senator.

McCain seemed to continue his feud with Trump in a letter to the nation written shortly before his death and released Monday. In that letter, McCain called on Americans to rally behind the country’s founding ideals rather than hiding behind walls and succumbing to political tribalism.

Trump campaigned on a promise to build a wall across the U.S. border with Mexico and demands that substantial funding for that wall be a part of any immigration bill Congress approves.

“We have always had so much more in common with each other than in disagreement,” McCain wrote. “If only we remember that and give each other the benefit of the presumption that we all love our country, we will get through these challenging times. We will come through them stronger than before. We always do.”

Veterans’ groups on Monday slammed Trump for his lackluster response to McCain’s death. They called on the White House to fly flags at half-staff through his burial and issue a presidential proclamation in honor of the Vietnam War hero.

“Despite our differences on policy and politics, I respect Senator John McCain’s service to our country and, in his honor, have signed a proclamation to fly the flag of the United States at half-staff until the day of his interment,” Trump said in a statement released by the White House.

Connecticut’s Democratic senators said McCain, the head of the Senate Armed Services Committee, helped them by pushing through massive defense authorization bills year after year that contained important funding for weapons systems made in Connecticut.

McCain was also there to help them with other issues, too.

Murphy traveled overseas with McCain six times as part of the senators’ work on the Senate Foreign Relations Committee, three of those trips to Ukraine.

McCain also visited Hartford with Murphy to meet with the Ukrainian community in Connecticut.

Kondik said McCain’s delight in cultivating an image of a “maverick” and his ability to cross party lines to help Democrats with legislation, including comprehensive immigration and campaign reform bills, won him the respect of Democrats and the attention of the press – but at a price.

“McCain’s support among the Arizona Republican electorate,” especially the more conservative GOP voters who cast ballot in primaries “was not that great,” Kondik said.