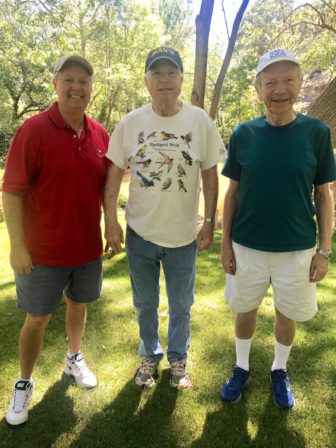 In a photo from Sen. Lindsey Graham’s Twitter feed,  Graham, John McCain, and Joseph Lieberman are shown during a hike through Arizona’s Oak Creek Canyon.

Lieberman will be one of a handful of speakers, which include former Presidents George W. Bush and Barack Obama and former Secretary of State Henry Kissinger, at McCain’s memorial service at Washington’s National Cathedral Saturday morning. Sens. Richard Blumenthal and Chris Murphy, who have lauded McCain as a military hero and  political maverick who sometimes crossed party lines as a matter of conscience, will attend the memorial.

Lieberman, meanwhile, has said little since his friend’s death. He has declined media interviews about McCain, whom he served with for 24 years in the U.S. Senate, and with whom he formed such a close bond that McCain almost chose him as his running mate when he ran for president in 2008.

With Sen. Lindsey Graham, R-S.C., McCain and Lieberman embraced the “the three amigos” moniker ascribed to the senators for their shared hawkish views of the military and U.S. foreign policy.

The three senators traveled the world together. On Tuesday, Graham gave a tearful speech on the Senate floor.

“It is going to be a lonely journey for me for a while,” Graham told his Senate colleagues.  “I am going to need your help, and the void to be filled by John’s passing is more than I can fill.”

Lieberman has said little publicly, but issued a statement on Saturday, the day McCain died of brain cancer.

“Although it was clear that John McCain’s life was ending, his death today hurts,” Lieberman said. “America has lost one of the greatest patriots and public servants in our history. And I have lost a dear friend.”

“The three amigos together again!” McCain tweeted at the time.

During McCain’s year-long battle with glioblastoma, an aggressive brain cancer, Lieberman visited McCain a few times, and the pair spoke often on the phone.

“We’ve had some really inspiring discussions, not melancholy, but not irrationally happy,” Lieberman told PEOPLE magazine in October.  “I would say the word is grateful. John looks back at the years he’s lived with gratitude and the opportunities he’s had.”

In his last book and in a recent documentary, McCain said he regretted not selecting Lieberman as his running mate in 2008. He said he was pressured to choose former Alaska Gov. Sarah Palin instead, and lost the race for the White House to Obama.

Lieberman was a Democrat – and former Sen. Al Gore’s running mate when Gore ran for president in 2000.

But during his Senate re-election bid in 2006, Lieberman lost the Democratic Party primary election to Ned Lamont, who is now the Democratic candidate for Connecticut governor. Lieberman ran as a third-party candidate, won re-election, and was listed as an “independent Democrat” in Senate records.

He caucused with Democrats, but after his speech at the 2008 Republican National Convention, in which he endorsed McCain, Lieberman was no longer invited to Democratic Caucus leadership strategy sessions or policy lunches.

Services for McCain began on Wednesday, with his body lying in state at the Arizona state capitol on what would have been his 82nd birthday.

On Thursday, a private service will be held at 10 a.m. at North Phoenix Baptist Church with fomer Vice President Joe Biden among the speakers.

McCain’s casket will be brought to Washington Friday to lie in state in the U.S. Capitol.

Vice President Mike Pence will present a wreath and represent the White House. President Donald Trump, who had a contentious relationship with McCain, will not attend the ceremonies at the U.S. Capitol and the National Cathedral.