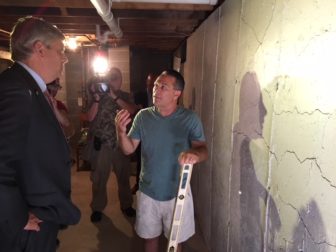 Willington — Republican gubernatorial candidate Bob Stefanowski toured a house plagued by the crumbling-foundations phenomenon that presents a multi-billion-dollar loss to homeowners in eastern Connecticut on Wednesday. He left skeptical about government’s financial obligations in addressing the slowly unfolding disaster.

“In this case, I’m not so sure the government should be paying for everything,” Stefanowski said. “You’ve got insurance companies. You’ve got mortgage providers. Hopefully, we can get something out of the federal government.”

Earlier, homeowner Tim Heim led Stefanowski on a tour of his blue Colonial, showing the spiders’ web of cracks spreading in a concrete foundation poured in the 1990s with aggregate from a local quarry contaminated with pyrrhotite, a naturally occurring mineral that corrodes and causes massive cracking when exposed to groundwater.

So far, the federal disaster-relief agency, FEMA, has disagreed, first during the administration of Barack Obama and now under Donald J. Trump. Insurers refuse to cover the damage, calling the cracking a construction defect, not a property loss. Heim says it would cost $200,000 to replace the foundation of a home that cost him $339,000 in 2008.

A lawsuit against his insurer was dismissed.

Heim has led this tour before, showing Ned Lamont, the Democratic nominee, and David Stemerman, an unsuccessful GOP candidate, the cracking that has bowed his foundation walls, which swell as the mineral expands. The swelling can lift homes off support columns, tilting floors and undermining structures. Eventually, the walls collapse.

“At what point do they make you move out?” Stefanowski asked.

Heim’s home still is structurally sound, though water pours in through foundation cracks when it rains and the degradation will continue. The homeowner is no fan of the present Democratic governor, Dannel P. Malloy, or anyone who has come to inspect without offering help.

Ben Carson, the secretary of Housing and Urban Development, inspected even worse damage to other Connecticut homes and suggested federal involvement was appropriate. That was on June 4.

Heim said he found Carson’s visit encouraging and suggested that, perhaps, a Republican governor on good terms with Trump could help.

“We need federal help,” Heim said. “This is what government is for.”

Last fall, the state committed to borrowing $100 million — $20 million a year for five years — to fund relief. This year, it imposed a $12 annual surcharge on homeowners’ insurance policies, which will raise another $10 million a year.

Stefanowski, whose central campaign promise is to shrink government spending and cut taxes to stimulate economic growth, was asked after the tour what it was like to be confronted by someone desperate for help from government, whether it come from Washington or Hartford.

He replied that the other entities, including the insurers who have largely avoided responsibility, should bear the larger burden. State government, he said, should have been more aggressive in assessing the problem before offering assistance.

“I do think it’s a symptom of this governor that rather than dealing with it, we kicked the can down the road again. This is a real problem. We’ve got to size it. We’ve got to fix it. You know, $12 per homeowner is not going to raise enough money to solve this problem.”

But then again, he’s not sure about the extent of the government obligation.

Stefanowski hesitated when asked if he would have signed the bills imposing the $12 surcharge or providing the $20 million in annual borrowing.

“That’s a good question,” he replied.

Heim had told him earlier that one of the state senators voting against the surcharge was Joe Markley, who is Stefanowski’s running mate.

Stefanowski said the state should be working harder to determine the scope of a problem that now is estimated to touch at least 30,000 homes. Stefanowski said he was reluctant to commit to state spending without that assessment.

“What’s the first thing you do? You size up the problem,” he said. “How many homes are impacted?”

Would he support mandatory inspections in affected areas? When told that some homeowners have been reluctant to come forward or seek testing until they know relief is possible, he hesitated again.

“It’s a fair point,” he said. “You don’t want to force yourself on people.”

Would he continue the $20 million in annual borrowing to provide relief?

Correction: As originally posted, Stefanowski was misquoted saying he was unsure if the government should be paying for anything, not everything.