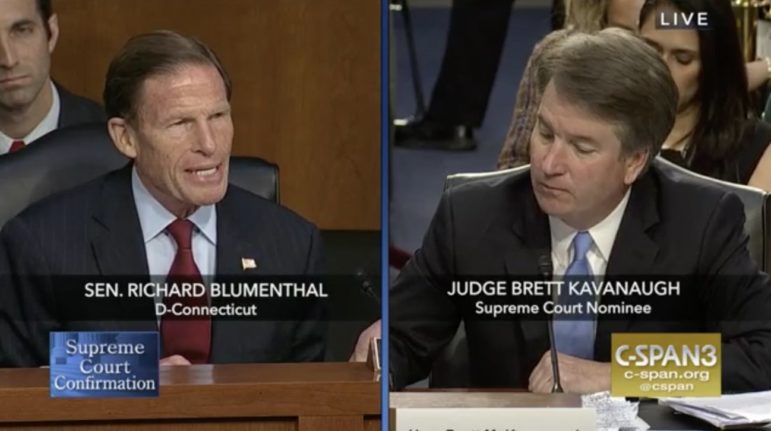 Washington – Sen. Richard Blumenthal on Thursday joined frustrated Democratic colleagues in releasing documents once designated as “committee confidential” as a way of exposing what they say are Judge Brett Kavanaugh’s true positions on abortion, affirmative action and other issues.

Shortly before he resumed questioning the Supreme Court nominee at his confirmation hearing Thursday, Blumenthal tweeted out a document containing an email Kavanaugh wrote in 2003 in which he argued the abortion rights case Roe v. Wade was not “settled law of the land.”

In his email, Kavanaugh wrote that he was “not sure that all legal scholars refer to Roe” that way, noting that the Supreme Court “can always overrule its precedent and three current Justices would do so.”

Kavanaugh was chosen by President Donald Trump to be the nominee for retiring Justice Anthony Kennedy’s seat. He has faced intense scrutiny from Democrats since he was nominated in July,

Blumenthal referenced the 2003 email Wednesday as he tried, unsuccessfully, to pin Kavanaugh down on his views on Roe v. Wade, and returned to the issue Thursday on  Twitter. 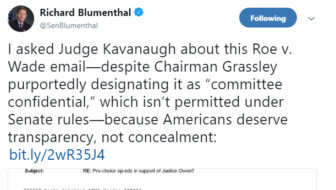 Kavanaugh’s confirmation hearing before the Senate Judiciary Committee had a stormy start Thursday. Blumenthal and several other Democrats on the committee said they were prepared to violate Senate rules and release documents related to the nominee’s tenure while working for President George W. Bush. The documents had all been marked “committee confidential,” or for the committee members’ eyes only.

While these documents and others were cleared for release early Thursday morning, Blumenthal may have violated Senate rules when he spoke about the content of emails that technically were still under “committee confidential” status late Wednesday.

Sen. Cory Booker, D-N.J., was the first to release a confidential document that showed Kavanaugh identifying himself and a colleague as among those who “generally favor effective security measures that are race-neutral,” while criticizing Department of Transportation affirmative action regulations.

Blumenthal continued his line of questioning Thursday, saying he “wanted to tie up a couple of loose ends from yesterday.”

He repeatedly asked Kavanaugh if anyone had shown him the “committee confidential” documents related to Roe v. Wade before Blumenthal questioned him on Wednesday.

Blumenthal also asked Kavanaugh if he had spoken to anyone outside the D.C. Circuit Court of Appeals  — where the nominee sits on the bench — about special counsel Robert Mueller’s Russia investigation.

Kavanaugh did not directly answer the question.

“I’ve had no inappropriate discussion,” he said. “But if you walk around in America, it comes up, so people discuss it.”

When asked if he had spoken to anyone at the White House about Mueller’s investigation, Kavanaugh said “I’m not remembering any discussions like that.”

“So far, frankly, your answer has been ambiguous,” Blumenthal said.

Blumenthal also asked Kavanaugh if he had discussed the Mueller investigation with anyone at Kasowitz Benson Torres, a law firm founded by Marc Kasowitz, Trump’s personal lawyer.

Kavanaugh said he did know one of the firm’s attorneys, Edward McNally. The judge also said another attorney with the firm, former Connecticut Sen. Joe Lieberman, “spoke to the judges (of his appeals court) a couple of years ago.”

Kavanaugh dodged questions about Trump’s Twitter attacks on Justice Ruth Bader Ginsberg – the president said “her mind is shot” – and Gonzalo Curiel, a judge of Mexican heritage who ruled in a class-action lawsuit concerning students who said they had been defrauded by Trump University.

The nominee said he did not want to “get within three Zip codes” of such a political controversy.

Putting up a poster of an 8-year-old Conner Curran ho suffers from Duchenne muscular dystrophy,  a genetic disorder characterized by progressive muscle degeneration, Blumenthal asked Kavanaugh about his dissent in Seven-Sky v. Holder, a 2011 case that centered on the constitutionality of the individual mandate provision of the Affordable Care Act .

That mandate, implemented in 2014, requires most people to have health insurance coverage or pay a fine to the Internal Revenue Service. However, it has since been overturned by Congress and will not be in force next year.

In the Seven-Sky case, the D.C. Circuit Court of Appeals upheld the ACA on its merits. But Kavanaugh said he would have instead held that the courts lacked jurisdiction to hear the case because of a federal law that bars any lawsuit challenging the collection of a tax before the levy is enforced.

Kavanaugh said he “expressed his support for the congressional goal” of the ACA in his dissent, but deflected questions about whether Trump has the authority to decide the controversial health care law is unconstitutional.

In a final round of questioning late Thursday, Blumenthal asked Kavanaugh to consider the victims of the Sandy Hook Elementary School massacre and other mass shootings and revise his views concerning a ban on semi-automatic weapons.

“I was at Sandy Hook the afternoon of that massacre. I know what assault weapons can do,” Blumenthal said.

In a dissent in a case that affirmed the District of Columbia’s right to ban such weapons, Kavanaugh wrote that assault weapons are too popular and too prevalent to ban.

Kavanaugh thanked Blumenthal “for his perspective” and said he would consider any argument that proved the test he used in the D.C. assault weapons ban case was wrong.