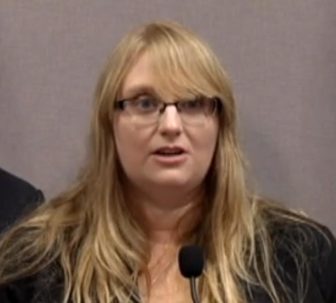 Lindsey Jones speaks to the media Thursday in Hartford

Victims of sexual assault in Connecticut on Thursday joined others across the country in backing Christine Blasey Ford, a college professor who has accused Supreme Court nominee Brett Kavanaugh of sexual assault decades ago when both were attending a teenage party.

At a press conference in Hartford that also featured Sen. Richard Blumenthal, Wethersfield resident Lindsey Jones said she was sexually assaulted at a house party as a teen and is still in pain 15 years later.

She said she did not publicize her attack because of fears she would be disbelieved and because of the notion that she was “the least important person in my life story.”

“I believed my pain, my truth, my future were all less important than the future of the people who assaulted me,” Jones said.

Another Connecticut woman, Tara Flynn, said she was repeatedly raped by the father of the children she babysat, beginning at age 14. She said the assaults continued until she was 18, and that she did not stop babysitting the children because she had an emotional attachment to them.

Flynn, of Naugatuck, also did not report the rape because she thought no one would believe her.

It was only after she left the job — and the man was suspected of assaulting another babysitter  — that she came forward with her story. Flynn said she was dismayed that after serving 5 years in prison, her assailant was set free.

“I don’t know today if I would have spoken up back then,” she said.

Across the nation, groups supportive of sexual assault victims are rallying to support Ford and her story.

“It can take years for survivors to feel safe,” said Laura Cordes, executive director of the Connecticut Alliance to End Sexual Violence. “He is believed, but she is threatened.”

Cordes said survivors of sexual assault “are watching” the drama in Washington touched off by Ford’s allegations that Kavanaugh, then 17 years old, and a friend pushed her into a bedroom at a party and that Kavanaugh groped her, tried to remove her clothes, and put his hand over her mouth when she tried to scream.

Senate Judiciary Committee Charles Grassley had scheduled a Monday hearing on the allegations.

Blumenthal, a member of the Senate Judiciary Committee, was among the first to say the FBI should reopen its background check of Kavanaugh after Ford decided last weekend to drop the anonymity under which she initially made her complaint.

On Thursday, Blumenthal continued to press for a “full, fair investigation by trained professionals who are impartial and objective.”

But soon afterwards, Ford’s lawyer said her client would be prepared to testify next week — apparently dropping her bid for the FBI to first launch a new inquiry, as long as senators provide “terms that are fair and which ensure her safety.”

Ford’s lawyers say she has been receiving death threats and forced to move out of her home in Northern California.

Blumenthal and other Democrats want a number of witnesses to be called, including anyone who may have attended the high school party in question, including Mark Judge, Kavanaugh’s friend whom Ford says was in the room during the alleged assault.

After blistering criticism from Democrats, Davis deleted his tweet.

Sen. Lindsay Graham, R-S.C. tweeted, “requiring an FBI investigation of a 36-year-old allegation (without specific references to time or location) before Professor Ford will appear before the Judiciary Committee is not about finding the truth, but delaying the process till after the midterm elections.”