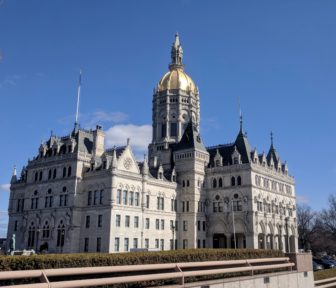 Findings from a recent survey of those who work at the state Capitol show that nearly a quarter of respondents have experienced sexual harassment, spurring legislative leaders to expand the scope of the General Assembly’s sexual harassment policy and tighten some of its protocols.

The survey, which gathered anonymous responses from a total of 593 staff, lawmakers, lobbyists and others who work at the Capitol and Legislative Office Building, also found that in about 15 percent of those cases, the harasser was a lawmaker.

Connecticut’s legislative leaders released a statement Friday saying they believe the updated policy “makes it clear that the General Assembly does not tolerate sexual harassment in any form.”

The new policy, announced Friday by legislative leaders and the Office of Legislative Management, expands the scope of its guidelines for General Assembly employees when they are off the Capitol grounds, including at “legislative-sponsored events, professional meetings or seminars, and those activities that involve legislative business.”

Twenty-two percent, or 131 of the 591 people who responded, said they have experienced hostile work environment sexual harassment at the Connecticut General Assembly complex. Of the respondents, 460 said they had not experienced that kind of harassment. Eighty-six people said the perpetrator of that harassment was a legislator.

Seventeen of the 591 respondents — or 2.88 percent — said they had experienced quid pro quo sexual harassment. When asked about who the perpetrator was, 15 respondents said it was a legislator.

In a question about why those who experienced sexual harassment did not report it, 82 of 555 respondents said it was due to a belief nothing will be done, while another 66 people cited fear of retaliation.

“Our goal is to provide a work environment in which instances of harassment can be reported without fear of retaliation and where everyone is treated with dignity and respect, and free from sexual harassment, both subtle and overt,” the statement by legislative leaders said.