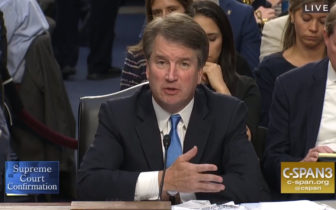 The magazine said Senate Democrats are investigating the claims of Deborah Ramirez, 53, who attended Yale with Kavanaugh in the 1980s and studied sociology and psychology.

Ramirez conveyed her allegations to Democratic senators through a civil rights lawyer.

The New Yorker says Ramirez, who was “raised a devout Catholic in Connecticut,” was at first hesitant to speak publicly, partly because her memories contained gaps caused by her drinking at the time of the alleged incident in the 1983-84 school year.

But, the magazine said, after six days of “carefully assessing her memories and consulting with her attorney, Ramirez said that she felt confident enough of her recollections to say that she remembers Kavanaugh had exposed himself at a drunken dormitory party, thrust his penis in her face, and caused her to touch it without her consent as she pushed him away.”

“This alleged event from 35 years ago did not happen,” Kavanaugh said in a statement released by the White House. “The people who knew me then know that this did not happen, and have said so. This is a smear, plain and simple.”

Kavanaugh also said, “I look forward to testifying on Thursday about the truth, and defending my good name–and the reputation for character and integrity I have spent a lifetime building–against these last-minute allegations.”

The Senate Judiciary Committee, which held four days of hearings on Kavanaugh’s nomination earlier this month, continued the hearings with a session on Thursday to receive testimony from the nominee and from Christine Blasey Ford, who has accused Kavanaugh of sexual assault at a house party in suburban Maryland when they were both teenagers.

The White House late Sunday said it continued to back  Kavanaugh.

“This 35-year-old, uncorroborated claim is the latest in a coordinated smear campaign by the Democrats designed to tear down a good man,” said White House spokeswoman Kerri Kupec. “This claim is denied by all who were said to be present and is wholly inconsistent with what many women and men who knew Judge Kavanaugh at the time in college say. The White House stands firmly behind Judge Kavanaugh.”

Ford, and Senate Democrats who oppose Kavanaugh’s nomination, wanted the FBI or another law enforcement organization to investigate the allegations involving the suburban Maryland party.

Ramirez is now calling for the FBI to investigate the alleged incident at Yale.

She told The New Yorker that it took place at a student drinking party in a suite at Lawrance Hall, which is located in the part of Yale known as Old Campus.

The magazine said senior GOP staffers learned of the allegation last week. Soon after, Senate Republicans renewed calls to accelerate the timing of a confirmation vote in the Judiciary Committee, the magazine said.

Sen. Richard Blumenthal, D-Conn., is a member of the Senate Judiciary Committee and an outspoken critic of Kavanaugh.  His role in the Senate Democratic investigation of this new allegation is unclear. He could not immediately be reached for comment Sunday evening.

On Monday morning, more than 100 Yale Law School students plan to protest Kavanaugh’s confirmation in Washington D.C. at the U.S. Supreme Court and the Hart  Senate Office Building, where Thursday’s confirmation hearing will be held.