When the call comes, and there’s no foster home available

It’s a phone call Brian Lynch has received too many times to count.

A child has been removed from her home by the Connecticut Department of Children and Families, she has significant needs – ranging from autism to psychiatric issues – and the agency is looking for a foster family to house and care for her. 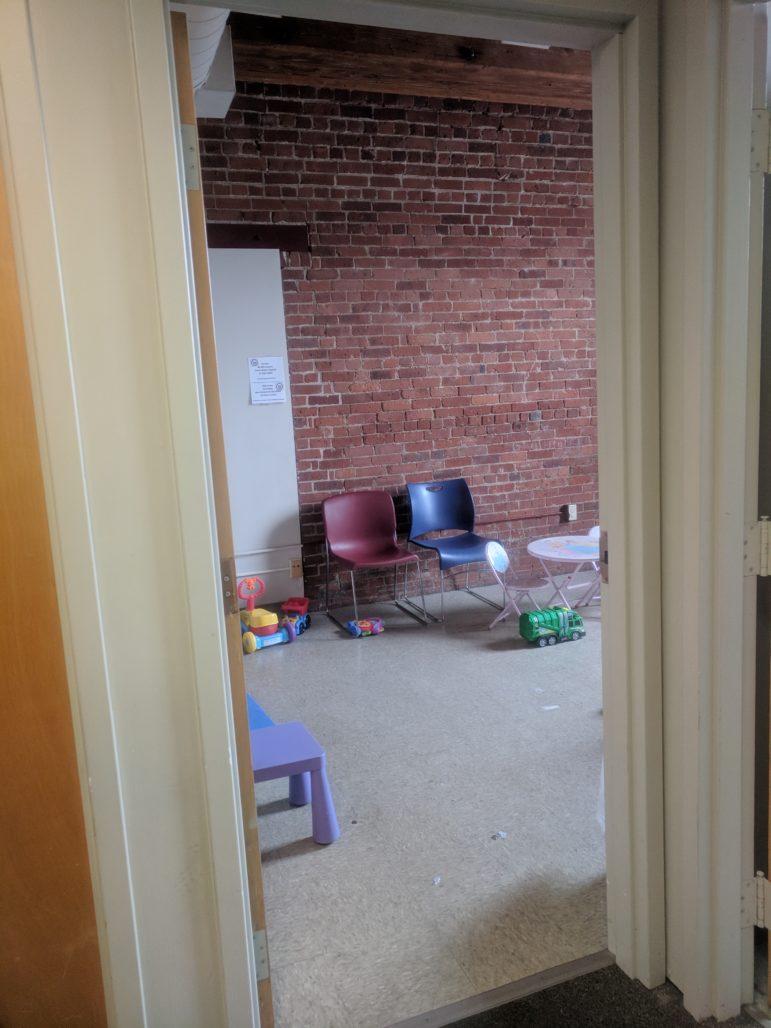 A visiting room at DCF’s New Britain offices for families to meet with children in foster care.

Sometimes the call comes in the middle of the night.

“Every day the phone is just ringing off the hook. ‘We have a kid. Do you have a bed?'” said Lynch, whose New Haven-based nonprofit works to recruit and retain foster families, describing the conversation he has with the state agency. “But we don’t have a bed. It’s a problem.”

On any given day, there are 107 high-needs children in the state waiting for a spot to open at a therapeutic foster home, where the family has been trained to accommodate children with more complex needs than the typical youth in state care.

The array of services made available for these homes is more substantial, which means the foster parents have services, like a babysitter, so they get short breaks and have around-the-clock support in a crisis from nonprofits like the one Lynch runs, The Connecticut Children’s Community Programs.

Most of these children wait in a group home or another institutional-like setting where workers take shifts to care for them until a spot opens in therapeutic foster home – waits that can stretch to 32 days, on average.

Now this system is headed for a shake-up.

In an attempt to reduce the waitlist, DCF has announced a major change, beginning in November, in who will be responsible for finding placements for these children.

Under the current system, when a child is identified as needing therapeutic care, the onus is on DCF to find a home from one of the 14 nonprofits that contract with the state agency to recruit and retain families.

These nonprofits have a network of 771 foster families that are licensed to provide therapeutic care for 1,211 youth. But many of those families don’t have any youth living with them, and carry a 9 percent vacancy rate.

“We have a lot of kids waiting. And they have open beds,” said Linda Dixon, the agency’s administrator of adolescent and juvenile services. “This [new] system is supposed to prevent that from happening.”

“We have a lot of kids waiting. And they have open beds”
Linda Dixon
DCF’s administrator of adolescent and juvenile services

Beginning in a few weeks, one of these nonprofits will be put in charge of coordinating placements with the other providers in each of the six regions of the state.

The problem, several say, is that there aren’t enough people signing up to become foster families. While it is true that some already licensed homes don’t have a child from month-to-month, that’s because there wasn’t an appropriate match or because they needed a break before taking in another youth.

“I can’t and shouldn’t make a family take a kid that they don’t feel comfortable taking,” said Lynch. For example, a family might feel comfortable caring for a youth with autism but not someone with a history of aggressive behavior.

But DCF officials said their solution with this reorganization isn’t about forcing mismatches. Instead, the agency said, it’s about identifying which homes are capable of succeeding, given the right supports.

“There are families out there that are willing to take and serve youth with complex needs,” said Dixon, who is confident that adding more pressure for nonprofits to find matches with this new setup will help make them more responsive. Providers will not have access to DCF’s vast network of alternative placements without special permission.

Several providers, in addition to Lynch, declined to be interviewed on the record because they rely on DCF contracts, but expressed concerns about the change.

Dixon points out that plan the agency plans to roll out in November is similar to the system for making placements prior to early 2012.

“We aren’t having as many providers step up as when we had [nonprofits leading placements] in place,” said Dixon. “When you tap a home for a specific child, they are more likely to step up.”

But providers said even with that setup – known as the SALA model – there were still major shortages of foster homes.

“Considering the previously established SALA system was unsuccessful, the Alliance is concerned that without substantial changes to the SALA model, the Department risks placing providers in a position to reinstate a model that may not be appropriate or sustainable,” Brunilda Ferraj, director of policy research for The Alliance, an organization that represents nonprofits in Connecticut, wrote DCF.

Perhaps most concerning for providers is how DCF plans to pay for this shift – by making the providers pay the new lead nonprofit to coordinate.

The cost is expected to reach $800,000 – which is almost 3 percent of what the state spends on therapeutic foster care. These providers have received one small rate increase from the state in the last 10 years, which was coupled with increased requirements surrounding recruitment of foster families.

“State resources are pretty tight. Everybody is tightening their belts. It’s a requirement in this environment,” said Gary Kleeblatt, DCF’s spokesman.

But that’s setting providers up to fail, warns Ferraj.

“Year after year, providers struggle to operate with inadequate funding, and now they are being asked to do more with less,” she said. “It’s not sustainable.”

Dixon said the state cannot wait until there is money to pay for this change.

“In terms of why now? Why not now. We have kids waiting. Why should they wait? Their needs are the most important,” she said.

And so providers are bracing for this shift, hoping it works out.

“I am not sure [the new system] will address the basic problem of getting more foster homes,” said Lynch. “We are all in a really tough place so I think we all have to try this. I don’t think this is the magic solution, but maybe it is the start of figuring out how we fix this problem.”