Lamont urges Stefanowski to take a position on Kavanaugh 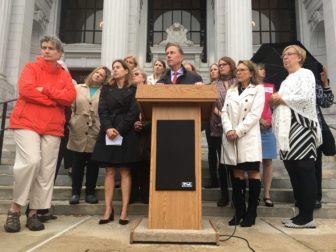 A day after Supreme Court nominee Brett Kavanaugh vehemently denied sexual assault accusations during a heated and tearful hearing, Democratic gubernatorial candidate Ned Lamont called on Republican Bob Stefanowski to state whether he supports the nominee or agrees with demands for an FBI investigation.

Lamont’s questions came before the Senate Judiciary Committee voted 11-10 on Friday afternoon to advance Kavanaugh’s nomination to the full Senate, but heeded to a request by U.S. Sen. Jeff Flake, R-Ariz., to delay a final vote until there is an FBI investigation.

During a press conference Friday morning, Lamont said he believes Christine Blasey Ford, who told that Committee on Thursday that Kavanaugh sexually assaulted her in the 1980s.

Lamont has joined a wave of candidates running for governor across the nation who are weighing in on Kavanaugh’s nomination after the two latest hearings.

Lamont said Ford’s testimony should, at the bare minimum, lead to an independent investigation, and he criticized Stefanowski for declining to answer a question about whether Kavanaugh should still be confirmed during a debate on Wednesday. Stefanowski had stated he would pass and that it is “a federal issue.”

Stefanowski said in a written statement that allegations of sexual assault absolutely must be taken seriously.

“The Kavanaugh confirmation is no exception,” Stefanowski said. “Our United States senators should carefully examine the entirety of the testimony, witnesses statements and evidence before the vote.”

Stefanowski also noted that if elected, he would ensure that any of his nominations to Connecticut’s courts would be “individuals who are highly qualified and have demonstrated outstanding moral character.”

Lamont was joined by about a dozen women leaders and advocates who stated their support for Ford and drew parallels between her treatment and that of Anita Hill, who testified about allegations of harassment against Clarence Thomas during his Supreme Court confirmation hearing in 1991.

Christine Palm, the head of Sexual Harassment Prevention, LLC, said both women were ridiculed, threatened, and disrespected because of their gender.

“Every complaint of sexual harassment must be investigated,” Palm said. “The fact of making an accusation does not make it true, but people who have nothing to hide will welcome a thorough investigation.”

“The women who have been energized to run over the past two years, I’m sorry ladies, we need to do more,” Bye said. “We need more women in office, we need more women helping elect women, and we need men who want to help women get in office as well.”

Oz Griebel, a third independent gubernatorial candidate, agreed there should be an investigation, citing the American Bar Association’s call for a delay of the committee’s vote until after an FBI investigation examines the multiple allegations against Kavanaugh.