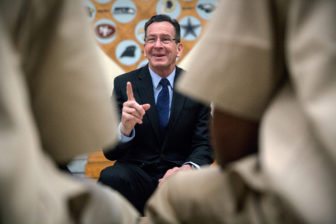 Cheshire — Standing inside a century-old maximum security prison auditorium as cameras live-streamed a conference on Connecticut’s prison system reforms Wednesday, Corrections Commissioner Scott Semple told those assembled that the event reminded him of watching the ripple effect from throwing a stone in a still pond.

Semple said the thought of having a livestream simulcast from inside a prison was something he couldn’t have imagined even a few years ago.

“Today is essentially an electronic version of that ripple effect,” Semple said. “I think of it as the electronic ripple effect of cumulative change … over time, ever expanding, creating ripples and waves of change.”

The livestream broadcast from inside the Cheshire Correctional Institution was transmitted to the John Jay College of Criminal Justice, where Gov. Dannel P. Malloy joined advocates and experts from the Vera Institute of Justice, a criminal justice reform group, for its Reimagining Prison conference.

Malloy said touring prisons in Germany with Semple in 2015 was one of the reasons he has embraced criminal justice reform.

The governor said that trip demonstrated how different the German correction system is because they view prison as “an opportunity for change and we simply tend to look at prison as a punishment vehicle and we should exact the highest possible price.”

“If we could change that dynamic in the United States, then we would have less crime, lower rates of recidivism, and we could really turn lives around,” Malloy said.

Malloy, who has made criminal justice reform a cornerstone of his agenda during his nearly eight years in office, has won passage of laws reforming the bail system, decriminalizing marijuana, and repealing mandatory sentencing for drug-possession crimes.

Connecticut’s recidivism rates have decreased steadily, and crime rates have fallen steadily in Connecticut in the past few years, as part of the continuation of decades of decline nationwide. The state has seen one of the sharpest declines in violent crime in the country, according to an analysis by Malloy’s budget office taken from recent FBI data.

The conference was partially focused on the 75 incarcerated men and correctional staff who are part of Cheshire’s T.R.U.E. Unit, a therapeutic community for the most disruptive and impulsive population in prison, inmates age 18 to 25. Malloy and Semple’s trip to Germany also served as the inspiration for the unit.

Those chosen from a pool of applicants are mentored by selected inmates serving life sentences and guided by specially trained staff, while engaging in activities with their families to help prepare them for reintegration.

Inmates wearing tan jumpsuits and white or black sneakers watched from metal benches in the prison’s auditorium as the conference toggled between panels and speakers in New York and Cheshire. At one point, inmates and those in the New York audience had the opportunity to ask panel members questions.

Jermaine Young, a mentor in the T.R.U.E. Unit who was sentenced to a 50-year prison term for murder, said he has learned his role is about teaching mentees “how to be a human being again … as well as dignity.”

“Because when you come to jail, your first step in jail your dignity is eviscerated at the door,” Young said. “So we are trying to restore that back by the programs that the mentors have created as well as facilitated.”