Lamont, Stefanowski on opposite sides of wide gender gap 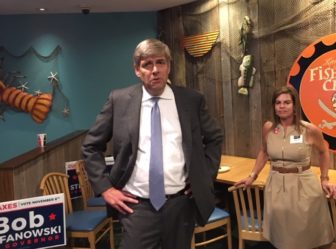 Bob Stefanowski and Leora Levy, the RNC member who is leading a coalition of women for Stefanowski.

Republican Bob Stefanowski and Democrat Ned Lamont are waging an asymmetrical fight for the votes of women in Connecticut’s race for governor, one in which Republicans are trying to keep voters tightly focused on the state economy and Democrats are making broader appeals over state and national issues.

Female voters, who are more numerous and tend to turn out at higher rates than men, are a prized demographic in every election cycle, but potentially more so at a time when Washington is riven over the confirmation of Supreme Court Justice Brett Kavanaugh, a conservative seen as hostile to abortion rights and accused of several long-ago sexual assaults.

Buoyed by a new Quinnipiac University poll that shows him with a huge advantage among women, Lamont and his running mate, Susan Bysiewicz, held a press conference Wednesday to promote what they called “a strategic agenda to empower, support and provide equal opportunity to woman in every face of their lives.”

Lamont and Bysiewicz reiterated their support for a paid family and medical leave program that stalled in the General Assembly, a $15 minimum wage, and greater access to child care. They also called for preserving funding for sexual assault and domestic violence services and extending the criminal statute of limitations for sexual assaults.

“We’ve got to make make sure that businesses and government accommodate the changing work place and make sure it’s easier for women to work and also to take care of things at home, the same thing for the fathers,” Lamont said during the event, which took place at an information technology company in Glastonbury.

He and Bysiewicz, who privately toured a domestic violence shelter earlier Wednesday, were joined by Nancy Tyler, a domestic-violence survivor who now serves on the board of the Connecticut Coalition Against Domestic Violence. Tyler said that many politicians are ignorant about the realities and consequences of domestic violence and sexual assault,

“Having been through it, I know a lot of women don’t feel like they are being heard, and that has to change,” Tyler said. “Women need government officials to hear them, to recognize and value their contributions. Right now in Washington we don’t see that support. We can’t let that happen here in Connecticut.”

On Tuesday night, Stefanowski attended a more casual event held by Connecticut Women for Change, a coalition organized late in the campaign season to build support among women for Stefanowski, or at least to discourage defections from the GOP over the Kavanaugh nomination and his potential influence on abortion rights.

Over cocktails at Lenny and Joe’s Fish Tale, a restaurant on Long Wharf in New Haven, the Kavanaugh confirmation didn’t seem to come up.

Her message to any woman who leaves the GOP over Kavanaugh is simple: “I’m telling them they have made a mistake. Kavanaugh doesn’t affect their lives. Kavanaugh, like every person whether male or female, is entitled to the presumption of innocence.” 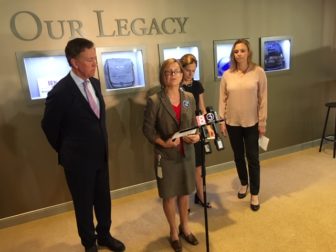 Stefanowski, who also regularly pronounces his campaign as being “laser-focused” on financial issues, declined to say during a recent debate before the confirmation if Kavanaugh deserved a place on the court.

“I’m going to pass on that,” Stefanowski said. “It’s a federal issue.”

Levy called Tuesday’s cocktail party an exercise in coalition-building and friend-making. Attendees were welcomed with a soft pitch for contributions, either financial or as a campaign volunteer.

Sarah O’Connor of Norwalk, who leads the College Republicans at Southern Connecticut State University in New Haven, said the Kavanaugh confirmation hearings showed how men are vulnerable to uncorroborated allegations of sexual assault. She said she thought of her brother.

Noting that her parents are small-business owners, her larger concerns for Connecticut revolved on the economic issues that are central to Stefanowski’s campaign.

Other women at the party said they, too, were most concerned about the economy and the state’s chronic budget woes. “I do believe it’s a spending problem. It’s not a revenue problem,” said Jennifer Verraneault of Branford.

Stefanowski mingled and briefly addressed the audience, which included old friends from North Haven, where he and his wife, Amy, another leader of the coalition, both grew up. Stefanowski, whose most recent private-sector job was chief executive officer of DFC Global, which offers payday loans and other alternative financial services, told them he always has included women on his leadership teams.

“I have always valued diversity,” Stefanowski said. “Every one of my management teams over the years, I’ve had 50 percent diversity. I do that for a reason. I want to surround myself with people who have different opinions. I want to solicit that opinion. If I hang around with people that are like me, I’m not going to learn a lot.”

Stefanowski, who also held senior posts at GE and UBS Investment Bank, mentioned he had three older sisters and three daughters. His wife and daughters are featured in his latest commercial, which seems aimed the gender gap that’s been long evident in polling, including the new Quinnipiac survey.

Among women likely to vote, Stefanowski trailed Lamont by 22 percentage points. His advantage among men was only five points.

Lamont has tried to build on the gender gap by campaigning frequently with Bysiewicz, a former secretary of the state. She offers constant reminders that Stefanowski’s running mate is Joe Markley, a conservative state senator.

“We want to make sure that women have access to health care, to reproductive health care, and to birth control,” Bysiewicz said Wednesday. “And you can count on Ned and I to stand up and defend Connecticut’s Roe v. Wade law.”

Connecticut has codified the elements of Roe into state law. The only limitation on abortion that Stefanowski says he favors is requiring parental consent or notification for a minor to obtain an abortion.

Women have been a bigger factor than men in elections for decades. According to the Center for American Women and Politics at Rutgers University, the percentage of eligible voters who turn out to vote has been higher among women in every presidential election since 1980 and in mid-terms since 1986.

Stefanowski has said his campaign’s central promise — to stimulate the economy by eliminating the income tax over eight years — is the best policy for men, women, and their families. On Tuesday, he briefly hinted at wanting to increase spending in some limited areas — if economic growth brought in new revenue.

“I’ve been consistent from day one on our policies — what we need for Connecticut. We need to lower taxes. We need to have less regulation,” Stefanowski said. “And I fundamentally believe that that’s what’s going to get this economy moving. It’s going to allow us to generate more tax revenues over the medium term that we can use to invest in education, in heath care, and all the things we need to do in this state.”