Trump, Malloy and the strange bedfellows of justice reform 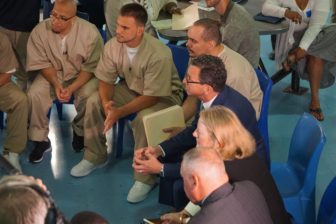 The governor and first lady in a roundtable talk with Cheshire CI inmates in May.

Was it more surprising that President Donald Trump listened to rapper Kanye West’s stream-of-conscious musings in the Oval Office the other day or that the president sounded a little like Gov. Dannel P. Malloy while talking about criminal-justice reform on Fox & Friends?

Before Kanye arrived for lunch, Trump indicated on Fox that he was embracing the FIRST STEP Act, a bill that includes a provision giving federal prisoners credit for positive behavior behind bars — similar to Malloy’s risk-reduction credits in Connecticut.

Malloy, a Democrat whose criminal justice and prison reforms have attracted national attention, was not willing Friday to conclude that Trump is joining a politically diverse reform movement that ranges from the ACLU to an institute funded by conservative businessman Charles Koch.

“The president says a lot of things, and talk is cheap. He’s done absolutely nothing to further the discussion or the effort,” Malloy said in an interview. “Having said that, at least he’s not saying negative things about it.”

Trump originally stood with opponents of the legislation, going so far as to oppose the Senate taking up the measure before the mid-term elections. A version already has passed the House of Representatives.

Senate supporters include leaders on both sides of the aisle, including Sen. Charles Grassley, R-Iowa, and Sen. Dick Durbin, D-Ill. Grassley chairs the Judiciary Committee and Durbin is the Senate minority whip. Opponents include Attorney General Jeff Sessions, whom Trump pointedly noted Thursday must fall in line on criminal justice reforms.

“If he doesn’t, then he gets overruled by me,” Trump said.

Grassley and Durbin also are sponsors of the bipartisan Sentencing Reform and Corrections Act, which would reduce federal mandatory minimum sentences for non-violent crimes, echoing an approach taken by Connecticut and other states.

In April, Grassley’s office described the measure as based on “state-level comprehensive criminal justice reforms that have reduced crime, incarceration and the taxpayer burden in states across the country.”

Malloy won bipartisan passage in 2015 of a “Second Chance Society” bill that eliminated prison as a punishment for many drug possession crimes, a step the governor says addresses the fiscal and social costs of incarceration, a mission supported by fiscal conservatives and social liberals.

Non-partisan legislative analysts predicted that a provision reclassifying most drug-possession crimes as misdemeanors would mean 1,120 fewer inmates. In 2016, the actual number turned out to be 1,130.

Two of the candidates trying to succeed him, Democrat Ned Lamont and petitioning candidate Oz Griebel, said during a recent debate they would continue Malloy’s reform efforts. Republican Bob Stefanowski did not.

“I don’t think he has a comprehensive understanding of the interconnectedness of governmental expenses and results,” Malloy said.

One of the Malloy administration’s prison reforms, the Risk Reduction Earned Credit authorized by the General Assembly in 2011, has been condemned by some Republicans, mostly recently by Sen. Len Suzio, R-Meriden, during a press conference 10 days ago.

As is the case with the federal FIRST STEP legislation, the Connecticut program allows most inmates — those convicted of certain violent crimes are ineligible —  to shave time off their sentences. In Connecticut, inmates can earn up to five days a month as a reward for good behavior.

“Risk reduction exists in almost every state,” Malloy said. “Connecticut was an outlier in not having rewards for appropriate behavior while incarcerated, which includes getting a GED or a high-school diploma or college credits or a training program or, quite frankly, being a model prisoner.”

Connecticut did offer good-time credits from at least 1862 until 1993, when the legislature passed a law requiring offenders to serve their full sentences in prison or under the supervision of the Department of Correction in a community-based program. The risk-reduction program created in 2011 has been modified several times through legislation and at the direction of Correction Commissioner Scott Semple.

Inmates are currently categorized based on a five-level scale of risk assessments such as a history of violence, discipline, and other factors, with level five representing the highest risk. Based on their risk level, offenders can earn up to three, four, or five days a month. Inmates assessed at level five are ineligible.

Suzio, the Republican critic in the state Senate, said every inmate should serve 100 percent of their sentence, regardless of whether the president embraces early release.

“My opposition to the early release program is not based on a belief we shouldn’t make an effort to reform criminal behavior,” Suzio said Friday. “What I do oppose is using early discharge as an incentive.”

Suzio points to any crime committed by an inmate before serving 100 percent of his time as evidence of a failure.

Malloy points to research that indicates inmates are less likely to commit new crimes if they are incentivized in prison to further their education or train for jobs. Nationally, Malloy said, such approaches are not partisan.

The legislation before the Senate is relatively modest. It would raise the cap on the good-time credits inmates could earn from 47 days to 54 days, though it would be retroactive, meaning instant freedom for some inmates.

Trump’s overall approach to reform has been ad hoc at times, focusing on specific cases rather than systemic changes. At the urging of West’s wife, Kim Kardashian West, the president signed an order in June commuting the sentence of Alice Marie Johnson, a 63-year-old woman serving life in prison for a nonviolent drug conviction.

“Mrs. Johnson, we got her out,” Trump said Thursday during his meeting with Kanye West and Jim Brown, the football hall of famer. “She was very unfairly treated.  And there are many other people like that.”

On Thursday, Kanye asked Trump to consider commuting the sentence of Larry Hoover, the leader of a notorious Chicago gang, the Gangster Disciples.

Malloy and others say a more dramatic approach by Trump would be to support sentencing reforms, either by legislation or policy. Trump has not stopped Sessions from insisting that federal prosecutors pursue the toughest possible charges and sentences against criminal defendants, reversing President Barack Obama’s efforts to ease penalties in nonviolent drug cases.

“I think the president could make that happen if he decided to, but he hasn’t decided to,” Malloy said of sentencing reforms. “I mean, it’s nuance. When I say I want to do something, it’s because I really want to do it, and I’m goiong to lead to get it done — or at least admit I have a setback.”

Trump needs to commit and follow through, not just have an photo opportunity with Kanye West, Malloy said.

“I am not going to give the president an A.” 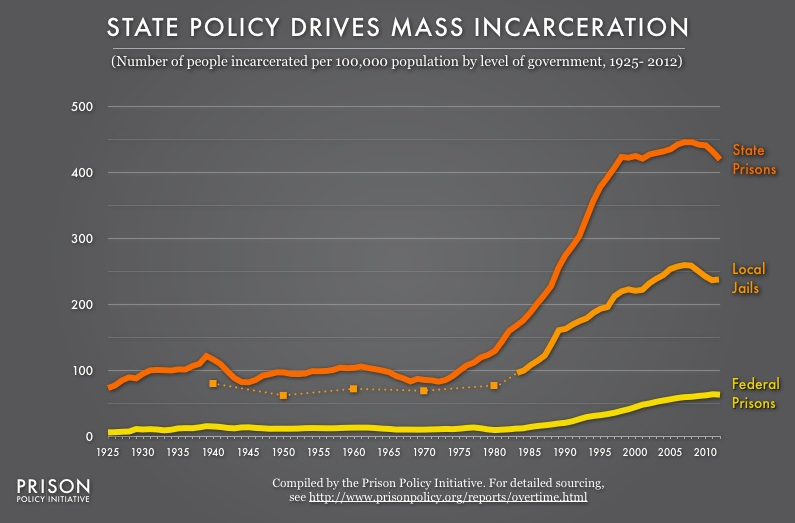 Federal prisoners are a small portion of the U.S. inmate population.