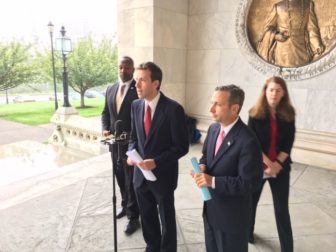 Matt Lesser addressing the press. He is flanked by Bobby Gibson, Bob Duff and Sarah Poriss.

Stefanowski, who was CEO of DFC until January 2017, has said he would not seek legislation allowing payday lenders to do business in Connecticut, but the legislators said his ability to name a new banking commissioner could affect how aggressively usury laws are enforced in the state.

Senate Majority Leader Bob Duff of Norwalk and Rep. Matt Lesser of Middletown, the co-chair of the legislature’s Banking Committee, joined Rep. Bobby Gibson of Bloomfield and Sarah Poriss, a lawyer who represents debtors, at a press conference arranged by the Connecticut Democratic Party.

“When I look at Mr. Stefanowski’s defense of this indefensible product that preys on consumers, that traps them in debt and poverty, I have real questions about whether or not he would put the consumers of Connecticut first,” Lesser said.

Lesser said too many people think payday lending is not an issue in Connecticut.

While state law currently bans it, the industry regularly lobbies state legislatures in an effort to expand its market, Lesser said. Connecticut voters need know how the next governor would respond to such efforts.

A spokesman for Stefanowski said his administration would protect consumers, but he dismissed the press conference as a stunt.

“Bob intends to appoint a banking commissioner whose chief goal is to protect Connecticut consumers and who knows the banking industry inside and out,” said Kendall Marr, the spokesman. “However, Bob also understands that the opposition will continue to stage political stunts to distract from the fact that their policies have directly led to the economic disaster our state is facing.”

Duff said Stefanowski “made a fortune trying to take advantage of people.”

Before Stefanowski took over in mid-2014, DFC engaged in what regulators on both sides of the Atlantic called predatory lending and collection practices, some involving fraudulent car loans to U.S. military personnel. Its other businesses included pawn shops and check cashing stores geared to the poor.

Stefanowski has said he ended some of the company’s most abusive practices, but Lesser and others said Monday that being a good guy in a bad business is not a credential for becoming governor.

“There is nothing I’ve ever seen in a payday loan that is designed to help a consumer,” Poriss said.

In interviews with CT Mirror, Stefanowski has defended his record in leading DFC Global.

DFC never stopped offering payday loans, and Stefanowski says they can be a responsible form of doing business, despite the industry’s poor record. He would not, however, suggest Connecticut legalize them, nor does he defend the industry in general.

“I’m not advocating anything like what payday lenders have done historically,” Stefanowski said.

Without offering details, Stefanowski said Connecticut consumers might benefit from some types of sub-prime lending that are currently banned.

“I guess what I would say is I’m not sure what model works correctly for Connecticut,” he said. “I haven’t looked at it enough in detail. But there should be something in the state to allow people in this space to have access to credit. It would be one of the things I’d think about in a fair and equitable way.”